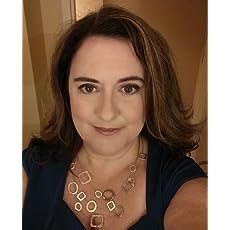 I write stories about romance. They center on learning about the characters backgrounds, personalities and life circumstances that mold them into who they are and how they love.

I am a sassy 50-something year old. I live in a quiet farming town in New England with my husband of twenty years and our two rescued cats. After college I facilitated improvement in the physical abilities of children and the elderly then took the opportunity to enjoy my creative side. I love to sew, knit, write...sing and drink martinis (not necessarily at the same time).
Read more 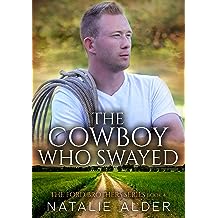 The Cowboy Who Swayed: Book Four in The Ford Brothers Series May 18, 2020
by Natalie Alder , Kristen Blanchard
( 1 )
$2.99
Butch Ford had good looks but he didn’t have much self-esteem. His anger led to fist-fights, his failures led to avoidance. But he was tired of swaying out of the way of flying fists and from schemes and lies. He wanted to have Jodi's level of confidence. And he figured he’d learn how by being her friend. Just her friend.
Read more
Other Formats: Paperback 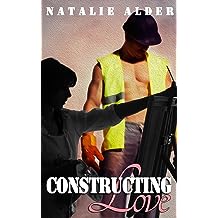 Constructing Love Jan 28, 2016
by Natalie Alder
( 10 )
$0.99
A tender new relationship...an artist and a construction worker. They are a work-in-progress with potential to be a portrait of happiness. But her desire for him as the subject in her next painting may taint their chances...
Read more
Other Formats: Paperback 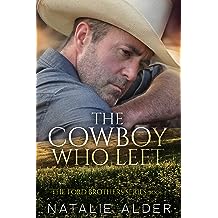 The Cowboy Who Left: Book One in The Ford Brothers Series Oct 26, 2018
by Natalie Alder
( 4 )
$2.99
Tanner Ford loved his brothers. Family meant a lot to the cowboy. It was challenging having to be the parent to them as well as his mother. Deciding to leave was the hardest thing he ever did.
Read more
Other Formats: Paperback 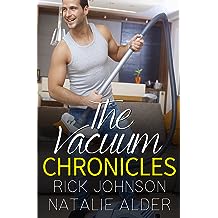 The Vacuum Chronicles (The Chronicles Series Book 1) Aug 5, 2016
by Rick Johnson , Natalie Alder , Alison Greene
( 10 )
$3.99
Mild- mannered Myles Mitchell wasn't looking for love that day in Daley's diner when he met Yvette Luponski. The thirty-two-year old accountant was happy with his vacuums and daily lunches at Daly's.
But from the first time he insulted her he was head over heels for the waitress. Join Myles on his rollercoaster love life with Yvette and the many different characters that frequent the same greasy spoon, including guest appearances by TT from Rick Johnson's Trailer Trash.
Author's note:
This romantic comedy is by no means a serious novel. In fact, the story is unrealistic, the characters absurd and the pages are full of ridiculous puns. We hope that you suspend reality long enough to enjoy reading it as much as we enjoyed writing it.
Rick and Natalie
Read more
Other Formats: Paperback 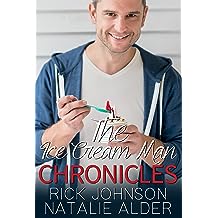 The Ice Cream Man Chronicles (The Chronicles Series Book 2) Feb 20, 2018
by Rick Johnson , Natalie Alder
( 3 )
$3.99
Humble Ted Mitchell was living his dream as the proud owner of an ice cream truck when he met the lovely Laura Iverson…and her three children. Attracted to the single mother at first sight, Ted thought maybe she could be the wife and family he had always wanted.
Casual conversation during their first few dates led to them starting their own investigation into the alleged deaths of Ted’s cousin, Myles Mitchell and Myles’s wife, Yvette. Even though all appearances pointed toward the couple having perished on the lake in a houseboat explosion, there was something very fishy about the tragedy. When Laura’s children’s antics became more than Ted thought he could handle (never mind Laura’s dangerous ex-husband, her wacky mother, the mob, and an FBI agent posing as a French waiter), he was soon wishing to have his old life back.
Sometimes, it’s best not to open a can of worms unless you’re actually fishing—for fish–and not for murder suspects. 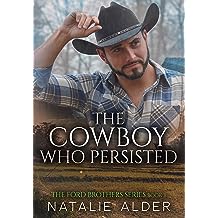 The Cowboy Who Persisted (The Ford Brothers Series Book 3) Apr 17, 2019
by Natalie Alder , Emily Kirkpatrick , Kristin Blanchard
( 2 )
$2.99
Getting the girl. The age-old story of guy meets girl, girl plays hard-to-get and guy tries his hardest to win her over. Gunner Ford only wishes it were so easy. The only girl he’s ever had eyes for doesn’t know he exists, but her overly possessive boyfriend is too aware of him. Beaten for taking her on a date he never did take her on is only the beginning. Gunner keeps his distance yet keeps getting the raw end of the deal…and still never gets the woman. He’s more worried about her safety than he is own, however. He can’t give up caring about her. If anything, he’s persistent. He’ll get the girl. Or maybe he’ll just die trying.
Read more
Other Formats: Paperback 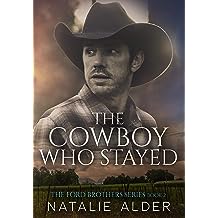 The Cowboy Who Stayed (The Ford Brothers Series Book 2) Dec 31, 2018
by Natalie Alder
( 3 )
$2.99
It was simple. Hunter worked the family farm. He was good at growing things. He wasn’t and didn’t need to be a nice person. So, why this woman pestered him to smile was beyond him. She was the most irritating woman he had ever met. She was also the most beautiful woman he had ever met
Read more 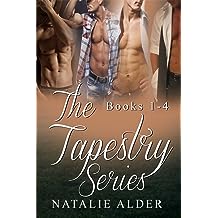 The Tapestry Series: Books 1-4 Jul 8, 2016
by Natalie Alder
( 1 )
$9.99
Bridgeton Pass Farm runs on the shear muscle and dedication of its employees. And like the cowboys that run it, the race horse farm is rugged and powerful. Having been in the Becker family for generations, the farm is currently run by William Becker and his sons. When trouble begins to plague the family business the men of Bridgeton Pass Farm and their employees pull together and prove their passion for their work is as strong as their passion for love and life.
Read more
Other Formats: Paperback 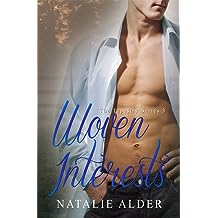 Woven Interests (The Tapestry Series Book 3) Feb 1, 2016
by Natalie Alder
( 7 )
$2.99
Uptight, serious, introvert…those were the words most used to describe James.
The middle brother in the Becker family, owners of a prestigious race horse farm in South Carolina, though austere was covertly a playboy.
Unable to resist a beautiful body, whether male or female, James never had a desire to commit to just one. A consummate player, he had no interest in a relationship.
Never say never. A broken ankle was the catalyst that led James to consider a relationship. Falling for a man already in a committed relationship with a woman was intricate enough. But the likelihood of their woven interests in each other becoming a real relationship was threatened by shallow judgment, the media and a troublemaking former barn hand. 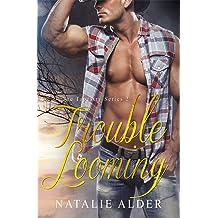 Trouble Looming (The Tapestry Series Book 2) Jan 28, 2016
by Natalie Alder
( 12 )
$2.99
Cole Becker helped his father raise his younger siblings after their mother died.
He helped his father take care of his aging parents until they passed away.
Now it’s time for Cole to have the life he deserves.
When he meets Sara, all of his dreams seem to finally be within reach…until things begin to fall apart. Their perfect romance soon becomes complicated, scary, even life-threatening. Will happiness ever be theirs? Will Cole and Sara get their ‘someday’ together? Continue Tapestry, the Becker’s family saga in Trouble Looming, sequel to Crewel Work. 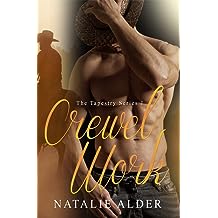 Crewel Work (The Tapestry Series Book 1) Jan 28, 2016
by Natalie Alder
( 42 )
$2.99
The key to a successful horse farm is the trainer. At Bridgeton Pass, J. P. Ryan is that key. William Becker is determined to protect his farm and keep Ryan on the job.
That goal is threatened by two things – a sinister act by another employee and the fact that his only daughter has fallen head-over-heels in love with J. P.
Becker can’t allow either of those things to threaten his legacy.
Audra grew up around the handsome trainer and fell in love with him at a distance, enchanted by his kindness and honesty. When they began stealing private but innocent moments, she found that she didn’t want to live without him. Audra is heartbroken when she has to choose between honoring her father and pursuing love.
J.P. wants Audra by his side, but he finds himself with a hard decision.
He is forced to choose between his career and the love of his life. Between the problem caused by the troublemaking barn hand and the frustration caused by his desire for Audra, J.P.’s job has become a ‘crewel’ work.
The story of the Becker family is woven as an intricate Tapestry. It is beautiful as a whole, but like any tapestry, you have to turn it over and look at the back side to see how the threads of love and family relationships are woven together into one intricate whole.
Welcome to the Tapestry series. 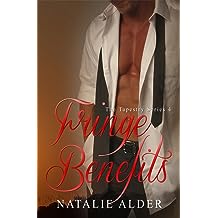 Fringe Benefits (The Tapestry Series Book 4) Jan 25, 2016
by Natalie Alder
( 8 )
$2.99
When William Becker, owner of a prestigious race horse farm, strikes a deal with Watchover Farm it puts him in touch with the farm’s beautiful broodmare manager, Leslie Scott. Just released from prison, Leslie’s dangerous ex-boyfriend is out to get her and a disgruntled former barn hand of William’s is only too willing to help him get to Leslie, the fringe benefit of William’s lucrative deal. If she escapes this killer, will she escape the next potential killer waiting in the wings? Can William handle all that comes with loving Leslie?
Read more
Other Formats: Paperback