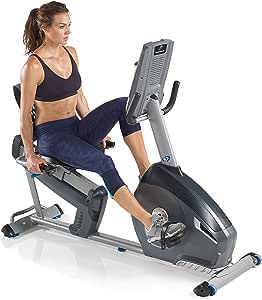 by Nautilus
4.2 out of 5 stars 527 ratings
| 306 answered questions
Available from these sellers.

4.2 out of 5 stars
4.2 out of 5
527 customer ratings
How does Amazon calculate star ratings?
Amazon calculates a product’s star ratings based on a machine learned model instead of a raw data average. The model takes into account factors including the age of a rating, whether the ratings are from verified purchasers, and factors that establish reviewer trustworthiness.

Wesley Everett
4.0 out of 5 stars Overall, great value, but one design flaw
Reviewed in the United States on March 27, 2018
Style Name: Nautilus R616Verified Purchase
UPDATE UPDATE: I've been using this machine for 30-60 minutes daily for almost 18 months. It's a good bike but if you're a person who tends to push it pretty hard, the seat design flaw, referenced below, might be a deal-breaker. The seat, which is entirely made of molded plastic, is attached t the frame by four fairly light-duty bolts, through tubular steel. As a 6' 2", 250-lb rider who pedals fairly hard, the torque from lateral motion tends to loosen these screws over time, creating an annoying crunching sound, and requiring retightening. It's not too hard to do that, but it's easy to strip out the screws, which are Phillips' head, or strip out the screw shafts themselves. After about a year mine became stripped beyond repair. Nautilus promptly replaced the seat and hardware. I reinstalled using blue Threadlock to secure the screws, which Nautilus approved as a good solution, saying they employ the same thing on some other machines. This solved the problem for about six months of regular use. But recently the seat came free again and began knocking around, making loud popping noises. I again replaced the screws,re-sealing and tightening down hard, but surprisingly, it wobbled worse than ever. Took it apart tonight and discovered the problem: the metal sleeves in the seat that the screws screw into -- apparently simply molded into the plastic of the seat base -- had pulled loose in their holes from the tightening fo the screws, eventually making it impossible to tighten them sufficiently (picture a nut breaking free from its mooring). There's no fix for that!

The machine is whisper quiet when operating normally but ridiculously loud when these screws fail. So I'll now be contacting Nautilus for my second replacement seat and third set of screws. I consider this a substantial design flaw, and the seat is not easy to change. It's simply underbuilt for the machine, which is too bad because the rest of is quite substantial. I'm a big rider who uses it pretty aggressively but nowhere near its top resistance levels. This shouldn't happen.
Bottom line: If you're a bigger person who plans to actually use the machine regularly, and push it fairly hard, this might be a deal-breaker for you, and you should look elsewhere until they reengineer the seat. If you're lighter weight and just a casual pedaler, the seat is likely to be fine. But be advised. And in any case, when you assemble it, it's a good idea to use the threadlocker on the four seat bolts. Tighten them down good and let the threadlocker cure for 24 hours before use. This will keep the bolts tight for a much longer time. But it won't prevent the flimsy screw posts themselves from ultimately separating from the plastic seat. Good luck!

UPDATE: After six months, still impressed with this machine. I did have a failure of the little wall wart power supply a few weeks ago. One call to Nautilus and I had another mailed no charge within a few days. Really good customer service response, no issues whatsoever. I would buy another one of these. When it was down for a few days, I realized how much I have come to rely on it for exercise!

So far, so good. Upgraded from previous Schwinn, which I liked, but the design of the head unit made it constantly wobble in use. Not an issue with this bike, which is generally lower to the ground/better designed. Smooth pedal action, good electronics, many many options. The bluetooth and wireless heart monitor features worked for me right out of the box, no issues. My one gripe is that, as others have noted, the seat structure does wobble a bit under heavy cranking. Probably not a quality control issue, but a little annoying. I suspect I'll get used to it. Would I buy it again? Probably, but I'd also look at the 618 model to see if it has a beefier seat structure, as I'd pay a bit more to eliminate that issue. Overall, though, I consider this bike to be a tremendous value as a home-exercise machine. Looks great, performs well, at least in the early stages of use. Two other notes: I'm 6'2'', and while inseam length is a more important indicator (i'm about a 32), I have sufficient legroom, with about 2 inches more available). And if you place a device on the mid-console tray and cover up the upper lefthand corner of the console, the wireless heart monitor might not register. Just move it over a bit.

a to z guarantee is a scam
1.0 out of 5 stars I can't believe a bike this expensive has such a design flaw!!!
Reviewed in the United States on May 25, 2019
Style Name: Nautilus R618Verified Purchase
I am 5'8" with a 31" inseam, which you would think was pretty average for the range of person you think they would have designed this bike for. However it has a huge design flaw! You cannot move the seat back or forth without raising and lowering it also. As a result, if I have it far enough back to have just a little bend in my knee at the farthest point of the pedal (the way you are suppose to adjust a bike to ride) then the pedal at it's highest and closest point to me is hitting me in the chest! If I have it back far enough that my knees are not knocking the air out of me as I ride then I cannot reach the pedal at it's lowest and farthest point. It won't adjust because you cannot simply raise or lower the seat or move it forward or backward. It has to be moved back and up at the same time or forward and down at the same time. It is the triangular type of base that creates this flaw and I cannot believe this went through any testing. The girl on the phone admitted she couldn't ride it either, she said she was 5'2" and said a guy 6'2" who worked there could not ride it also. I had to send it back. Probably someone who never rode a recumbent bike in his/her life but had big engineering degrees designed this. If you look close enough at the male model riding it you can see his knees are way up to high for anyone realistically to be able to ride this without developing knee problems, or to have the breathe to get a good cardio workout. If you look at the girl model closely you can see she can barely reach the bottom pedal. The male's top knee is too flexioned and he will end up with pain in the front of his kneecap. The female's knee is too straight on the lower pedal and she will end up with pain in the back of her knee. If either rode this bike regularly as shown they would end up needing to have their knees replaced.
Read more
62 people found this helpful
Helpful
Comment Report abuse