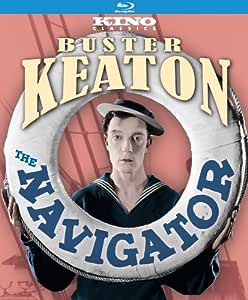 Brilliantly exemplifying Buster Keaton's ability to mime rich humor from the inanimate, The Navigator is a classic of the Golden Age of Comedy, centered on and about a single extraordinary prop: an immense five hundred-foot yacht.

In a return to the ''pampered youth'' role he had played in The Saphead (and would return to in Battling Butler), Keaton stars as Rollo Treadway, an inexperienced lad of extraordinary wealth -- and surprisingly little common sense -- who finds himself adrift on ''The Navigator'' with no one else on board except an equally naive girl (Kathryn McGuire). After discovering each other's presence in an ingenious ballet of unintentional hide-and-seek, the couple resourcefully fashion a home for themselves aboard the derelict boat, in spite of their unfamiliarity with the tools of domesticity.

They then embark on a series of misadventures on the ocean floor (where Rollo in a diving suit must parry the attacks of an aggressive swordfish) and upon the high seas, surrounded by a fleet of menacing cannibals, where the film reaches its explosively funny climax, with the aid of a crate of rocket flares. Beatifully remastered from new HD material.

A. Burchfield
3.0 out of 5 stars One of Keaton's two favorite…
Reviewed in the United States on February 23, 2018
Verified Purchase
…roles, the other being "The General", according to this movie's featurette. I think the featurette said Navigator didn't do as well in the theaters.

Navigator is scratchier than some "restorations", especially for the title and dialog cards(?), but most of the movie looks pretty good. The makeup silent film actors used to wear on their faces is more noticeable here than in some movies.
Dangerous stunts including a segment shot underwater, some funny bits and a lot of detail but I think that "The General" might be the one to buy if you can afford just one of the two.

Not very much here to be "Ultimate", great detail and lots of action…the featurette has some behind the scenes pictures, the "gallery" doesn't.
I read in the trivia section IMDB has on 2001: a Space Odyssey that the walking, rotating, stewardess (on the spacecraft) scene was an effect created by Buster Keaton for this movie…it's towards the last don't risk leaving the room, you might miss it (not very significant looking here).

Worth owning if you can afford it.

Unhappy customer
5.0 out of 5 stars Excellent silent comedy.
Reviewed in the United States on September 21, 2017
Verified Purchase
Excellent Blu-ray disc of classic comedy. I remember this film on TV when I was a child. Quality of the print is excellent. Would buy from this company that had produced this disc again.
Read more
Helpful
Comment Report abuse

J. D. Heise
4.0 out of 5 stars Not Keaton's best (that would be SHERLOCK, JR.) but still a comic gem.
Reviewed in the United States on December 9, 2012
Verified Purchase
Amazing how much story and gags can be packed into a hour and yet it never seems rushed. Nice to see the original tints restored and Robert Israel's score is a lot of fun. One quibble: no one thought to try and actually integrate the recording of "Asleep in the Deep" into the score? Seems that in the digital age that could have been done and quite effectively.
Read more
2 people found this helpful
Helpful
Comment Report abuse

Peter M Langdon
1.0 out of 5 stars Defective CD
Reviewed in the United States on January 16, 2019
Verified Purchase
This CD does not play.

I have two CG Players and it won't play on either.
Read more
Helpful
Comment Report abuse

Mrs. M. Parker
5.0 out of 5 stars My Review!!
Reviewed in the United States on July 14, 2003
Verified Purchase
Of all the Buster Keaton videos I've seen so far I think this was the best!!
It was just too funny. There was hardy a moment I wasen't laughing. One of my favorite parts was where Buster and the girl he's with are trying to find a safe place to sleep.
It's the kind of movie you have to see for you self: words can't discribe it exeped for, great and funny. and even those aren't enough. It was that good.
Read more
4 people found this helpful
Helpful
Comment Report abuse

Michael P O'Hea
5.0 out of 5 stars Five Stars
Reviewed in the United States on September 16, 2014
Verified Purchase
Excellent film quality plus insightful extra commentaries on one the best films of a giant of humour.
Read more
Helpful
Comment Report abuse

Michael Miller
4.0 out of 5 stars Buster Keaton Still a Legit Superstar 86 Years On
Reviewed in the United States on April 18, 2010
Verified Purchase
When one considers how repetitive and uninspired most artistic productions, indeed, most of life, are, Buster Keaton remains an uniquely satisfying talent nearly a century past his heyday, even when you have seen many things somewhat similar to his films, or have a pretty good idea of what is coming.

I did not enjoy The Navigator as much as I did College, the other other Keaton movie I have seen to date. This may be due to a general personal terror of boats and water, which make the comic possibilities of drowning or being adrift at sea strike me more darkly than perhaps they do other people. The film starts off with two very good jokes, and I was anticipating that it was going to be perhaps in a special category of greatness even among the acknowledged great. And it is good, but the various gags on the ship, while often ingenious, don't always strike me as being as funny as other situations do.

I have to admit I am at this point more of a Chaplin than a Keaton fan--these two camps seem to form one of those strange divisions of life across sections of which there is little commonality or fraternization. Chaplin to me is the fuller human, and brings more of what it is really like to be a person into his movies. Keaton may better represent some more particular strain of modernity though.

Regarding the two shorts on the tape, The Boat is about a family whose boat springs a leak in the middle of the night during a tempest and is actually kind of scary, though it does star the lovely Sybil Seely. The Love Nest is set on board a cargo ship ruled by a tyrannical captain; there is some good humor in it.
Read more
One person found this helpful
Helpful
Comment Report abuse

See all reviews from the United States
Pages with related products. See and discover other items: buster keaton