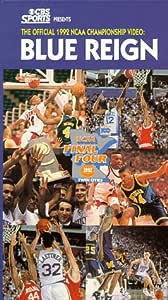 Featuring highlights of the 1991-92 NCAA Basketball Championship, focusing on the Final Four and winning team. Also includes a recap of all the special moments of the 1992 tournament, capturing the stunning upsets and emotional drama.

K. G. Dean
5.0 out of 5 stars BEST DUKE BLUE DEVILS' TEAM, EVER
Reviewed in the United States on September 21, 2005
Verified Purchase
Dating back to the days of 1986, Duke basketball has always been hated by many, but respected by all. The 1991-1992 DUKE BLUE DEVILS only had one objective...winning the national championship, again. With a record of 34-2, and a wire-to-wire #1 ranking in the AP poll, this team accomplished their goal. Christian Laettner, Grant Hill, and Bobby Hurley were definitely the catalysts for this team, and this video takes you through the their remarkable run to the tournament, the Eastern regional final game verses Kentucky (which can be considered the greatest college basketball game ever), and the national championship game against Michigan's "Fab Five".
Read more
2 people found this helpful
Helpful
Comment Report abuse

Tina Morris
5.0 out of 5 stars Murray at his best
Reviewed in the United States on March 11, 2002
This is a nice video that was produced in 1992 after Nigel Mansell had finally claimed the F1 world championship. Framing the clips from all his grand-prix victories is a very interesting and entertaining interview with Murray Walker who of course also comments on the footage shown from all the different seasons. This format choice is very wise as it makes for a good flow of the video and prevents it from becoming a boring hitparade of video-clips from races. It also puts the different wins into the perspective of Mansell's entire carreer up to that point. This is particularly interesting of course as Nigel discusses his ferocious rivalry with his team-mate at Williams, Nelson Piquet that was good for some breath-taking moments on and off the track. The quality of the footage shown is very good and paired with the solid as well as entertaining reporting style of the unforgettable Muzza it makes the tape a must-see for real F1 fans - and yes, the video does contain that funny famous interview of Nige after the race where Murray pokes him in the forehead to see if that bump really did hurt.
Read more
2 people found this helpful
Helpful
Comment Report abuse

Amazon Customer
5.0 out of 5 stars A great look at Nigel's F1 career with some nice insights
Reviewed in the United States on November 12, 2000
'Our Nige' is one of Britain's all time F1 heroes, and a video comprising the crucial moments from his 30 victories of the era makes for a must for fans. You see his wheel-to-wheel duel with Ayrton Senna in Spain 1991, his superb duels with Nelson Piquet in 1986 and 87's British races, doubtless hugely memorable to those who were there, and lots more. The interview sections with Murray Walker (a legend in his own right) are interesting and make a great package for fans.
Read more
2 people found this helpful
Helpful
Comment Report abuse

Philip G. Rose
4.0 out of 5 stars Well-Done Tape, Very Enjoyable, Had a Roaring Noise throughout for some reason
Reviewed in the United States on January 19, 2014
Very enjoyable but had a noise in the background the entire tape which took away from it some but content was great!
Read more
Helpful
Comment Report abuse
See all reviews