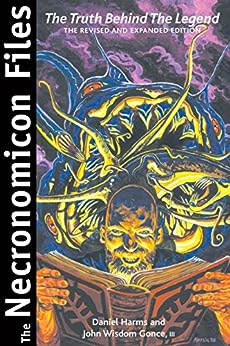 The Necronomicon Files: The Truth Behind Lovecraft's Legend Kindle Edition

by Daniel Harms (Author), John Wisdom Gonce (Author) Format: Kindle Edition
See all formats and editions
Sorry, there was a problem loading this page. Try again.
What if a book existed that gave answers to everything you've ever wondered about? What would you do to learn its secrets? Tales of such books have abounded for millennia and are legend in occult history. One of the most pervasive modern iterations is that of the Necronomicon, said to be a genuine occult text from the 8th century. The Necronomicon really is the creation of science fiction writer H.P. Lovecraft (1891-1937), in whose books the magic volume first appears in print. In The Necronomicon Files two occult authorities explore all aspects of The Necronomicon, from its first appearance in Lovecraft's fiction to its ongoing pervasive appearance in cult and occult circles.

The Necronomicon Files, revised and expanded further, reveals the hoax of the Necronomicon. Harms and Gonce show that the apocryphal history of the Necronomicon was concocted by Lovecraft to lend it verisimilitude in his fiction. The magical text was transformed into an icon among Lovecraft's literary circle, who added to the book's legend by referring to it in their own writing. People became convinced that it was a real book and its references in literature and film continue to grow. The book also examines what people have undergone to find the Necronomicon and the cottage industry that has arisen over the past three decades to supply the continuing demand for a book that does not exist.

Scholarly yet accessible, humorous and intriguing, The Necronomicon Files illuminates the depth of the creative process and the transformations of modern myth, while still managing to preserve much of the romance and fascination that surrounds the Necronomicon in our culture.
Read more
Previous page
Next page

Daniel Harms (Upstate New York) holds two masters’ degrees, one in anthropology and one in library and information science. His major area of research is magic from antiquity to the present, and he has been published in the Journal for the Academic Study of Magic and the Journal of Scholarly Publishing. Harms is also the author of two books on horror fiction and folklore.

Dan Harms is an author, librarian, and scholar who deals with topics ranging from the fiction of H. P. Lovecraft to roleplaying games to books of magic. He lives in upstate New York with a cantankerous ball python.

Blair C. aka Darby
4.0 out of 5 stars The Necronomicon Files: The Truth Behind The Legend by Daniel Harms and John Wisdom Gonce III
Reviewed in the United States 🇺🇸 on July 1, 2013
Verified Purchase
This book is huge! They mention alotta obscure Necronomicon stuff that used to be on the Web but isnt anymore. That kinda sucks.. They also devote alotta time to attacking The Simonian Necronomicon or Simonicon. What the authors need to understand is, there is no definitive authentic Necronomicon! Rather Necronomicon is a type of book & an archetype or dream-symbol of things & forces in this World & the Universe that cant be immediately understood or perceived consciously. There was a book entitled 'Necronomicon' a long time ago but it was more like a farmer's almanac & the writer was eccentric but not named Alhazred as scholars have shown, this is an improper Arabic name. Therefore SIMON's version is authentic as there is no longer extant a singular Necronomicon, but many. One of the ways i translated the word NECRONOMICON is, 'The 100 Dead Names Of ON'. Which ON, is one of the oldest names of God. So a 'Necronomicon' is just a book that uses obscure of outdated names of God. Another translation i rendered is, 'Outer On o Naci'; or Outer Annunaki. Which means it would be any book about ancient astronauts, Nephilim, or any book based on info transmitted or channeled from alien sources; either extraterrestrial or pan-dimensional.
Read more
5 people found this helpful
Helpful
Report abuse

Uncle Lewis
5.0 out of 5 stars Full of Info
Reviewed in the United States 🇺🇸 on February 1, 2013
Verified Purchase
If you-all have a corner in your library devoted to the Necronomicon, this is a must-have. It's easy to see why Mr. Levenda's kind'a upset with Gonce, as he tends to be snide--they pick on the Simon Necronomicon the most 'cause it's the biggest target--but Mr. Harms is the "good cop" of the duo, and is more even-handed. The real value of this book is the huge mass of incidental info. in it...I also advise you to pick up Simon's Necronomicon, no matter if you think it's the "real McCoy" or not.
Read more
5 people found this helpful
Helpful
Report abuse

Peter Forrence
5.0 out of 5 stars good and bad
Reviewed in the United States 🇺🇸 on April 7, 2014
Verified Purchase
Daniel's section was wonderful. John's section is mixed. The review of modern occult history is nice. The occultist attitude that John brings to a work of non-fiction is tedious.

I would certainly say the book is worth it just for Daniel's section (though I wish that were longer). Just, don't be surprised that John's section seems longer and isn't necessarily worthwhile (though not necessarily worthless). know what you are getting into.
Read more
8 people found this helpful
Helpful
Report abuse

Royce E. Buehler
5.0 out of 5 stars The Necronomicon debunker's bible
Reviewed in the United States 🇺🇸 on April 20, 2004
I've been rereading and enjoying Lovecraft, man and boy, for fifty years now. I haven't been a full-blown fan, but I've absorbed several volumes of discussion and criticism. In depth of detail, documentation, readability and balance, this one is head and shoulders above anything else I've seen. Once I track down Daniel Harms' Encyclopedia Cthuliana, I'll be able to toss my old Lin Carter. Hey, it was about to start flaking and putrescing anyway.
I snapped up the Simon version of the Necronomicon the month Avon released it in 1980. I won't bore you with the tale here, but so many unsettling synchronicities attended the purchase that I didn't have the nerve to read through it for over a year. So my mind has definitely been open to taking it seriously. At the same time, I was familiar enough with HPL's descriptions of the mad Arab's book to know it didn't match up, and was at least partly hoax. What a pleasure to find that nearly a third of this book discusses Simon's opus, exploring it from just about every angle. I found the authors' conclusions completely convincing.
Harms is a Lovecraft scholar; he gets almost a third of the book to discuss the history of the Necronomicon as an artifact of the fiction written by HPL and his circle. Even if you are one of those fans who share Howard's complete confidence that the only things that ever really go bump in the night are turns of bad plumbing, this part of the book alone justifies its space on your shelf. There's a bit of biography, a look into the evidence on sources, and a masterfully clear timeline of how, story by story, the notion of the Necronomicon was fleshed out. Harms sticks to business, discussing the Cthulhu mythos only to the extent that it bears directly on some detail about the book. (The one thing I missed seeing here was a catalogue of all the other non-existent companion titles dreamed up by Bloch and Smith and Derleth and the crew.) A reasonably complete list of published titles purporting to be the Necronomicon, with summaries and evaluations, is here too.
Then Mr. Gonce picks up the story from the perspective of the impact of the idea of the Necronomicon on the occult subculture. Of the many supposed "Necronomicons" on offer, only a few claim to include usable spells and rituals. And of these, only the Simon volume is sufficiently explicit and complete to have enticed any significant number of readers to try the contents out. The results have been, as Warren Zevon might have put it, not that pretty at all. So the core of the book devotes itself to untangling the origins of the Simon version, explaining why it is a hoax, and looking at the phenomenon of the many cults, most of them very tiny, that have sprung up around that hoax. Its grimoire is a pastiche from many incompatible cultures and some invokings invented out of whole cloth. As a practicing pagan, Gonce believes many of these individual spells "work", but the incoherence of the whole system means they don't work very well, and amateurs will get into magickal trouble because the book doesn't indicate how to banish what is invoked. For practicing skeptics in his readership, he provides sobering examples of manipulative cults and even murders, which show that you don't need to believe in magick to know that in the hands of alienated teens the Simon edition is bad juju.
All this is rounded off with a hilarious roll call of films and TV shows that have played off the Necronomicon meme. Many of the film reviews are several pages long, with plot synopses probably more entertaining than the movies themselves. And then each is scored for fidelity to Lovecraft.
If you have only one book about Lovecraft in your library, other than a biography, this is probably the one you want. If your circle of friends includes dabblers (or adepts) in magick, it definitely is.
Read more
64 people found this helpful
Helpful
Report abuse
See all reviews