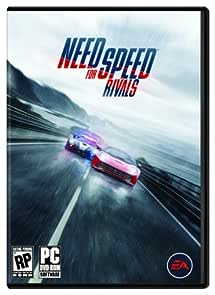 Visit the Electronic Arts Store
Platform : Windows Vista, Windows XP, Windows 7 |
Rated: Rating Pending
| DRM: Origin
3.7 out of 5 stars 177 ratings
Available now.
Ships from and sold by Amazon.com Services LLC.
Note: After purchase, you can access the item in Your Games Library.
By placing your order, you agree to our Terms of Use.
This product is non-returnable and non-refundable.
Note: Currently, this item is available only to customers located in the United States.

Welcome to Redview County, where a street-racing rivalry between cops and racers never stops as both sides compete in an all-out war to take over the social, local and national media and earn the best cars, mods and technology. Risk Everything. Trust No One.

Recommended System Requirements:
Additionally, Need for Speed Rivals will support SLI-mode if your system is SLI-enabled.

3.7 out of 5 stars
3.7 out of 5
177 global ratings
How are ratings calculated?
To calculate the overall star rating and percentage breakdown by star, we don’t use a simple average. Instead, our system considers things like how recent a review is and if the reviewer bought the item on Amazon. It also analyzes reviews to verify trustworthiness.
Top reviews

Wise Owl
3.0 out of 5 stars Fun, but has some glaring issues.
Reviewed in the United States on December 19, 2013
Platform: PC DownloadVerified Purchase
I got this game for $30 and can not imagine paying more money for this game as I don't believe after playing it that is worth any more than that. 2 and 1/2 stars.

Pros- Awesome graphics, I would say slightly better looking than the latest Most Wanted game. The landscapes are varied and the best I have seen in any NFS game. The cars sweat a lot, but it looks nice. I have an i5 3570k, HD 7870, and 8GB of RAM with this game is maxed out and it runs very smoothly. I wish it wasn't capped at 30fps, but for most it really shouldn't be an issue.
-The cars are fantastic. It is mostly all exotic beautiful expensive cars (you don't start out in anything cheap). Ferrari I missed you!
-The driving is very similar to Hot Pursuit, so is the gameplay and races. Yes you can make the car do a 180 or turn on a dime.Cop chases are super fun and difficult. It's no easy task to get away from them especially the more heat you get. Getting busted has consequences (you lose all the speed points you have been racking up).

Mixed feelings- The online is nice sometimes when you want to race real drivers, but they like to smash into you a lot. It can be laggy, but I have not had too many issues with it. I mostly play single player and enjoy that mode the most.

The bad- There is one persistent bug that really pisses me off. I can be driving along and all of a sudden my car will freeze in place while the environment loads up. The problem with this is it can last anywhere up to 5 seconds and all the while everything but you continues on (the racers, the cops, and the timer all continue while you are temporarily frozen in place).
- No wheel support for a racing game...
- Barely any cars. Only 24 cars for racers and 24 cars for cops. Maybe I am just spoiled by Gran Turismo and Forza.
- Crappy car customization. It's enough to keep me happy, but don't expect Midnight Club level customization. Heck even GTA V had better car customization.
- Absolutely no way to pause the game (what nincompoop decided that) I understand for online, but even in single player you can't pause.
- EA sucks

Overall I feel like this is a combination of Hot Pursuit and Most Wanted (the latest ones). I enjoyed both of those games much better than this one. I will say this game is still quite a bit of fun on PC and if they fixed a few things it could be even better. If you are really desperate for a racing game then this one is good enough despite it's problems that I could recommend it.

Carl Corey
1.0 out of 5 stars Completely worthless piece of garbage
Reviewed in the United States on March 8, 2014
Platform: PCVerified Purchase
The main thing I will say about this game besides the graphics, which aren't beyond playing, is that the controls are an issue with me. If you don't have the controller (Xbox 360 controller if I'm not mistaken) that the idiot PC port designers say you must have, then you are stuck using the keyboard (which is worthless). I've used my logitech dual action controller on every PC racing game I've ever used without a problem until now. It's almost as if these arse holes want to force people to bypass the PC version of this game and make them choose a console instead. Not going to happen, unless my wife finally releases the stranglehold she has on our checking account and considers the Xbox or Playstation a need and not a want.

I say do not buy this game. PC or Console. Boycott this garbage. It's a shame I've loved just about all the Need for Speed Series of games up until the last 2 or 3 poor efforts. Force these losers to go out of business, finally. Maybe a company completely different will pick up the series. A company who cares about the buyer. PC or Console owner. No bias, as EA Games seems to have total bias against the PC.
Read more
5 people found this helpful
Helpful
Comment Report abuse

Rich
4.0 out of 5 stars I'll be odd man out: A great rendition of a solid game
Reviewed in the United States on January 15, 2014
Platform: PC DownloadVerified Purchase
I just began PC gaming in the last few months after being kind of turned off by the PS4/Xb1 console wars and the thought of spending in excessive of $500 for a new console, extra controllers, $60 games, having to pay for online gaming, etc; so I purchased a GTX 760 for under $200 instead (and that came with a couple games - A. Creed IV, SC: Blacklist - which seemed like a no brainer.) I already had a decent computer (i5 Ivy Bridge, 8gb ram, ssd) so it was a quick and easy upgrade. Mixed that with Wireless HDMI and Xbox 360 controllers that I already owned (with the wireless dongle) and I was pretty much set with my little homemade console experiment. The recommended settings for NFS: Rivals on this card is everything turned up to 11. So I obliged and it frankly has run pretty much perfectly in the 30 fps mode. Maybe it's because I'm playing it on a 106" screen, but truth be told the 30 fps comes across very smoothly.

Graphics: Look fantastic for the most part. The 30 fps lock doesn't bother me as the game still has a great sense of speed and is very fluid. There is certainly a little aliasing (this is visible on every version of the game I've played) by default but it isn't particularly bad, and can at least partially be remedied with SweetFX.

Comparison with other platforms: Having played the PS4 and Xbox One versions around Xmas time (thanks to family dropping by), I can safely say the PC, PS4 and Xbox One versions of this game all look about the same on my setup. The PC version went a slightly more overkill on the physic/debris but it runs and looks nearly identically on all three platforms. Using the Xbox 360 controller with the game is seamless, buttons automatically change from "Press Enter" to "Press A" when the controller is detected, rumble support works fine.

Gameplay: I haven't played a NFS in a while. With that said, this game is an all around blast. Seriously just a lot of fun. While there are still issues with Host Migration occurring way too often, at least it doesn't kick you out of your event/return you to your garage. Some people will have an issue with the controls, on the gamepad it took a couple runs to get used to them, but it has since been pretty simple.

Overall: It's a great game that could use a few technical tweaks (the Frostbite engine is very capable obviously, but many of the Command Line modifications break the game outright (the 60 fps one, for instance, caused my car to get stuck a lot, and frankly it was a bit like having a seizure in other spots.)) but it's still one of the most enjoyable, most visually appealing racers to come out in quite some time, though there is definitely a little room for improvement. Highly Recommended.

Moderate:
+/- 30 FPS Cap, doesn't bother me at all but it's obviously a huge issue for some

Sarath
1.0 out of 5 stars Embarrassing
Reviewed in Canada on February 28, 2015
Platform: PCVerified Purchase
I liked the game so much..
but when I tried to amp up some fps by reducing resolution, it froze. no keystroke make it work again.
it kept freezing each time I tried to reduce resolution.
EA Games? seriously? this is not what I expect from a reputed company like that...
my $22 is wasted..
Read more
Report abuse
See all reviews

Page 1 of 1 Start overPage 1 of 1
This shopping feature will continue to load items when the Enter key is pressed. In order to navigate out of this carousel please use your heading shortcut key to navigate to the next or previous heading.
Back
Next
Pages with related products. See and discover other items: pc games car racing, pc games ea, pc games to play