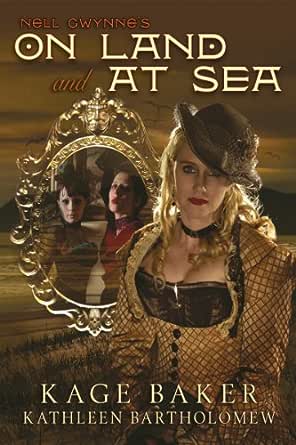 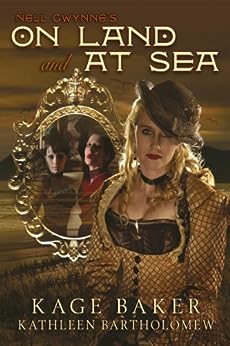 Nell Gwynne's On Land and At Sea Kindle Edition

Even a month-long seaside holiday can't keep the spy-mistresses of the exclusive Nell Gwynne brothel away from trouble in this comic steampunk novella. This time trouble arrives in the form of Tredway Pickett, an expatriate American yachtsman who seeks glory in the service of Queen Victoria by sinking French ships with his newly devised submarine. Revolutions breaking out all over Europe are tying up the operatives of the Gentlemen's Speculative Society, so the ladies are left to use their own ingenuity and a few super science devices to stop Pickett before he ignites war. Baker (1952–2010) originated the Nell Gwynne series with the Nebula-winning The Women of Nell Gwynne's (2009), and her death left this episode incomplete; it was finished by Bartholomew, Baker's sister. References to other books in the series will entice her fans, and the mildly naughty nautical double entendres and period-style illustrations by J.K. Potter will entertain readers who appreciate Victoriana. (Jan.)

The Ladies of Nell Gwynne's are not your run-of-the-mill demi-mondaines. They are refined and educated ladies all, engaged in the more elegant and expensive forms of carnal delight in order to make their way in a hard world. But they also serve the Queen and the Empire, as the invaluable Ladies' Auxiliary of the technocratic Gentlemen's Speculative Society.However, even the most dedicated operatives need a holiday from time to time. Nell Gwynne's shuts down for a month at the height of every summer for recreation and relaxation. This summer the Ladies have retired to a respectable boarding house in Torquay, since Mrs. Corvey, the Proprietress, is very fond of the sea. She also needs a deal of relaxing, as the cook at Nell Gwynne's has abruptly gotten religion and departed without notice for a less exotic position… That is Mrs. Corvey's only worry, though, when she and the Ladies arrive in Torquay, the Riviera of England. They all look forward to taking the sun, some moderate sea bathing, reading novels and indulging in a little light archaeology. As Hebertina happily observes, “Here's to blessed chastity!” However, Torquay has recently been invaded by an eccentric and overly romantic American, who has peculiar intentions—both toward the placid coast of Tor Bay, and the unassailable privacy of Lady Beatrice. There are rumours and sightings of a sea monster. There are dead butlers and thugs and fox terriers in inconvenient places. And the Ladies cannot summon assistance from the GSS, all of whose agents are pursuing convoluted schemes abroad in Europe.It appears their holidays will not be nearly as quiet as might be hoped…but they will certainly be interesting.

4.3 out of 5 stars
4.3 out of 5
21 customer ratings
How does Amazon calculate star ratings?
Amazon calculates a product’s star ratings based on a machine learned model instead of a raw data average. The model takes into account factors including the age of a rating, whether the ratings are from verified purchasers, and factors that establish reviewer trustworthiness.
Top Reviews

Annandale
3.0 out of 5 stars A Bittersweet Trifle
Reviewed in the United States on October 30, 2013
Format: Kindle EditionVerified Purchase
Kage Baker is one of my favorite sf writers, so I was fully prepared to enjoy this minor work of hers (and her sister's). I did read the previous Nell Gwynne's tale (The Ladies of) but can't remember having done so (found it in the cloud from off my kindle), so either my memory is failing or it simply wasn't very memorable. In any case, this is a fun romp, the 'ladies' are a hoot, and the background of her ladyship is quite impressive. So sad that wonderful Kage isn't with us anymore, to entertain us with her marvelous imagination, mordant wit, and stylish writing.
Read more
One person found this helpful
Helpful
Comment Report abuse

Kindle Customer
4.0 out of 5 stars Bittersweet steampunk
Reviewed in the United States on September 7, 2013
Format: Kindle EditionVerified Purchase
Best read after its prequel, The Women of Nell Gwynne's, this is one of the last works by the late great Kage Baker. It works as steampunk scifi, but is even better in conjunction with her related novels of The Company. I'm only sorry she never got to write more in this series. Baker's ear for tone and dialogue in different historical settings is uncanny and entertaining as always.
Read more
One person found this helpful
Helpful
Comment Report abuse

Kindle Customer
5.0 out of 5 stars Worth the time and an excellent read.
Reviewed in the United States on April 19, 2015
Format: Kindle EditionVerified Purchase
Kage Baker was always an unpredictable writer. At the end of this book you are left with the question as to whether or not the American gentleman central to the plot is part of the fabric of the Company or not. Worth the time and an excellent read.
Read more
One person found this helpful
Helpful
Comment Report abuse

Techie
5.0 out of 5 stars Never Underestimate the Resourcefulness of a Lady
Reviewed in the United States on November 12, 2013
Format: Kindle EditionVerified Purchase
It has adventure, humor, wonderful descriptions and atmosphere and great characters. I miss Kage Baker and wish she were still here to write more tales of Nell Gwynne's establishment and the ladies' adventures. I hope her co-author picks up the kid glove and gives us more of the wonderful escapades.
Read more
One person found this helpful
Helpful
Comment Report abuse

Christy Curtis
5.0 out of 5 stars On Land & Sea with Ladies of the Evening
Reviewed in the United States on April 4, 2013
Format: Kindle EditionVerified Purchase
Interesting concept Prostitutes who double as spies. Well written & I enjoyed every word. I like that the women are smart & resourceful & the touch of humor the book had added to the well written plot. I highly recommend it if you are looking for escapist reading this summer.
Read more
One person found this helpful
Helpful
Comment Report abuse

Austin mom
5.0 out of 5 stars Kage Baker and The Ladies to the rescue!
Reviewed in the United States on April 5, 2013
Format: Kindle EditionVerified Purchase
This book is outstanding, everything you could ask for in a mystery/steam punk adventure! The characters could walk right off the page, they are so realistic. The story is exciting, suspenseful and humorous -the Ladies and Kage Baker give Sherlock a run for the money!
Read more
4 people found this helpful
Helpful
Comment Report abuse