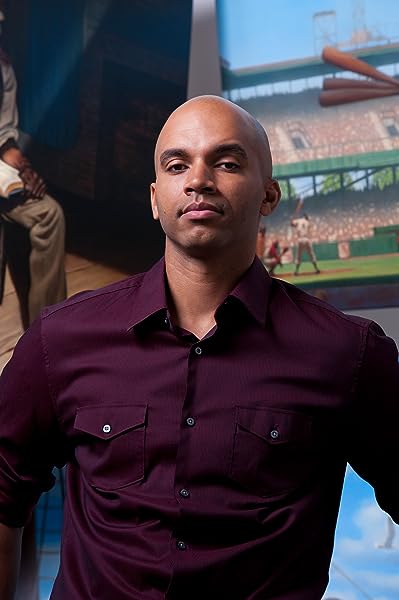 Gr 1-5-This picture-book biography matches Mandela's outsize achievements with large, powerful images, resulting in a presentation that will seize and hold readers' attention. The front cover features a portrait of Mandela that fills the space. His pleasant but determined expression immediately projects a sense of strength. The title and author move to the back cover so as not to compete with the opening image. A stark graphic design incorporating black, green, yellow, and red, colors from the South African flag, on the title page helps set the stage for the narrative. Nelson's paintings range from poignant, when Mandela's mother tells him good-bye as he leaves home for more education at the age of nine, to exuberant, when Mandela and 100 men arrested for protesting apartheid respond by dancing and singing, to inspiring, when people organize rallies demanding his release. When freedom finally comes, "a colorful sea of people" celebrate. Mandela's heroic struggle might be new to many children today, and Nelson's dynamic treatment provides enough detail to give a sense of the man and to acknowledge his important place inhistory.-Lucinda Snyder Whitehurst, St. Christopher's School, Richmond, VAα(c) Copyright 2011. Library Journals LLC, a wholly owned subsidiary of Media Source, Inc. No redistribution permitted.

Starting with the full-page cover portrait, this glowing picture-book biography offers a celebratory introduction to Nelson Mandela’s life for young readers. Clear free verse and handsome, unframed paintings follow the iconic leader from his tribal childhood and his work as a young city lawyer through his political leadership against the brutality of apartheid, his long imprisonment, and then the triumph of his election as president of his country. The story doesn’t mention conflicts both political (the splits in the anti-apartheid movement) and personal (the bitter rift with his daughters), as well as the continuing inequality South Africans face. Still, words and images bring close the cruel apartheid segregation in daily life, including one double-page spread of Cape Town’s glorious beaches with the sign that reads White Area. Then there is the view of prisoners on Robben Island hammering rocks into dust. In contrast, the final pages show today’s nonsegregated beaches and people of all races standing together free at last. A long final note fills in more. HIGH-DEMAND BACKSTORY: With an internationally beloved leader as its subject and a multi-award-winning artist as its creator, this title is sure to be on every library’s must-purchase list. Preschool-Grade 3. --Hazel Rochman

“A beautifully designed book that will resonate with children and the adults who wisely share it with them.” (Kirkus Reviews (starred review))

“An extremely powerful picture-book biography of South Africa’s first black president. It’s a solid biography in its own right, but thanks to Nelson’s characteristically stunning paintings, it soars.” (Publishers Weekly (starred review))

“A dramatic encounter indeed.” (Bulletin of the Center for Children’s Books)

One day when Nelson Mandela was nine years old, his father died and he was sent from his village to a school far away from home, to another part of South Africa. In Johannesburg, the country's capital, Mandela saw fellow Africans who were poor and powerless. He decided then that he would work to protect them. When the government began to keep people apart based on the color of their skin, Mandela spoke out against the law and vowed to fight hard in order to make his country a place that belonged to all South Africans.

Kadir Nelson tells the story of Mandela, a global icon, in poignant verse and glorious illustrations. It is the story of a young boy's determination to change South Africa and of the struggles of a man who eventually became the president of his country by believing in equality for people of all colors. Readers will be inspired by Mandela's triumph and his lifelong quest to create a more just world.

4.8 out of 5 stars
4.8 out of 5
84 customer ratings
How does Amazon calculate star ratings?
Amazon calculates a product’s star ratings based on a machine learned model instead of a raw data average. The model takes into account factors including the age of a rating, whether the ratings are from verified purchasers, and factors that establish reviewer trustworthiness.

Misha
5.0 out of 5 stars This is a great book for school-aged readers
Reviewed in the United States on February 10, 2017
Verified Purchase
This is a great book for school-aged readers. My children were born in South Africa and, while we no longer live there, I want them to know the history of Apartheid, the ANC and the New South Africa. This book is a kid-friendly introduction to the amazing work of Mandela and can teach kids many lessons about integrity and equality.
Read more
4 people found this helpful
Helpful
Comment Report abuse

Eric Selby
5.0 out of 5 stars One of the Most Beautiful Books: The Art Is Beyond Description
Reviewed in the United States on December 14, 2013
Verified Purchase
I would not have known about this book except that the author/artist was interview on the NewsHour (PBS) at the time--it was last week--of Nelson Mandela's death. I don't have the vocabulary to describe the artwork. But when one reviewer says she was disappointed because this is a children's book (yes, of course it would be sold as one), I can only say that this book is for everyone who has a love for the life and work of Nelson Mandela. This is a book that you can count on as being just one of those absolutely perfect gifts. The text is straight forward, but it is the art work that is so awe-inspiring.
Read more
2 people found this helpful
Helpful
Comment Report abuse

Brenda
2.0 out of 5 stars Not what I expected.
Reviewed in the United States on June 17, 2019
Verified Purchase
Not what I expected. I wanted more writings and essays that Nelson Mandela did and I do not see this in that book.
Read more
Helpful
Comment Report abuse

Amazon Customer
5.0 out of 5 stars Wonderful book for kids
Reviewed in the United States on February 24, 2020
Verified Purchase
This book was a great read for my son and an excellent resource for his school project
Read more
Helpful
Comment Report abuse

Barbara Angersbach
5.0 out of 5 stars Beautiful book. Inspiring story
Reviewed in the United States on January 14, 2017
Verified Purchase
Beautiful book. Inspiring story. I first saw this book at the Bill and Melinda Gates Foundation. i donated it to my granddaughter's school library.
Read more
One person found this helpful
Helpful
Comment Report abuse

Andyjam
5.0 out of 5 stars Love it
Reviewed in the United States on February 17, 2014
Verified Purchase
I bought this book to encourage my kids to learn about Mandella. The pictures worked for those who could not read that well, excellent short reading for the ones who don't like to read, and the story was told and understood brillantly short with pictures
Read more
2 people found this helpful
Helpful
Comment Report abuse

TLA in ATL
5.0 out of 5 stars Must Have!
Reviewed in the United States on January 2, 2014
Verified Purchase
I purchased two copies of this book as holiday gifts for two young boys just before the passing of Nelson Mandela, and I'm so glad I did! The illustrations are outstanding and bring the story to life! This is an excellent way to educate a young child on the life and legacy of this great leader in a captivating and meaningful way! I wish this illustrator would also produce a coffee table book of great leaders for adult consumption!
Read more
2 people found this helpful
Helpful
Comment Report abuse
See all reviews from the United States

Amazon Customer
3.0 out of 5 stars Good book not for young readers though
Reviewed in Canada on January 7, 2020
Verified Purchase
Great read however if you are unfamilar with the language it is a bit hard to understand some words... While reading to my 4 yr old i had to skip over some of the language. Great book if you want to learn more about nelson mandela
Read more
Helpful
Sending feedback...
Thank you for your feedback.
Sorry, we failed to record your vote. Please try again
Report abuse

Lynn
5.0 out of 5 stars Five Stars
Reviewed in Canada on January 8, 2018
Verified Purchase
Beautiful book. Kids enjoyed it and so did I.
Read more
Helpful
Sending feedback...
Thank you for your feedback.
Sorry, we failed to record your vote. Please try again
Report abuse

Red Bus Book Lover
5.0 out of 5 stars Luminous picture book about this most important of men
Reviewed in the United Kingdom on October 27, 2018
Verified Purchase
This book absolutely glows with warmth on every page. Nelson Mandela is so famous and so well-known that the cover does not even need a title. But his story does need to keep being told to each generation ensuring it stays alive. This book covers his life, from childhood to presidency, extremely well and is pacy enough to use as a read-aloud book.
Read more
Helpful
Sending feedback...
Thank you for your feedback.
Sorry, we failed to record your vote. Please try again
Report abuse

Page 1 of 1 Start overPage 1 of 1
This shopping feature will continue to load items when the Enter key is pressed. In order to navigate out of this carousel please use your heading shortcut key to navigate to the next or previous heading.
Back
Next
Pages with related products. See and discover other items: history of south africa, nonfiction biographies picture books, picture book biographies, south africa history