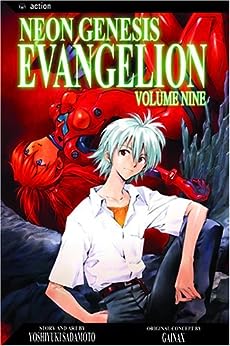 Pride in being an Evangelion pilot--that is the essence of the Second Child, Soryu Asuka Langley. But the day she was chosen to be so was the most horrible of her life--and as that truth rises to consume her, Shinji finds a new comrade in the strange, beautiful and disturbing Kaworu Nagisa. Born on the day of the Second Impact, he has been sent directly by SEELE, which alone knows him by his real name--Tabris, the Angel of Free Will.

Eva Vol. 9 contains a Japanese sound FX glossary plus a special bonus article on Kaworu, the mysterious stranger of the Evangelion story. 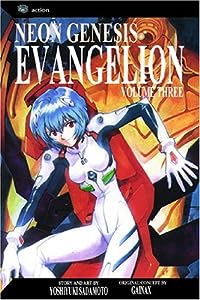 Yoshiyuki Sadamoto, one of the founding members of the animation powerhouse Studio Gainax, is the character designer for THE WINGS OF HONNEAMISE, NADIA, NEON GENESIS EVANGELION the animated series, and many other anime, illustration and art projects. His latest art book, DER MOND, is also available in English translation from VIZ Media. NEON GENESIS EVANGELION is Sadamoto's only full-length manga series. --This text refers to an out of print or unavailable edition of this title.

Cam
5.0 out of 5 stars Rare
Reviewed in the United States 🇺🇸 on April 14, 2012
Verified Purchase
I'm not sure why, but this volume is exceedingly hard to find. Snag it if you can find it, because it's exceedingly good as well. At the time of this review the book averages about 70 dollars.
Good luck and happy hunting!
Read more
2 people found this helpful
Helpful
Report abuse

AP_MAQUINA
5.0 out of 5 stars Five Stars
Reviewed in the United States 🇺🇸 on May 4, 2016
Verified Purchase
great read, loved the series and decided to collect the books.
Read more
One person found this helpful
Helpful
Report abuse

tami
5.0 out of 5 stars Where the differences sock you in the face
Reviewed in the United States 🇺🇸 on January 30, 2005
This is a review for the evangelion manga, vol 9. Because it appears as if Borders is being a little lax about including pictures or information, I'm going to add a little extra information before getting on with the review.

The cover features Kaworu in the foreground, and Asuka in the background. For you who don't know whose those characters are or what they look like, Kaworu is a pretty boy with albino-like features (like Rei.) Asuka is a redheaded teeange girl with blue eyes. In the picture, Asuka appears to be floating upside down with the head of Evanglion unit 02 behind her. She has somewhat of a dazed/hypnotized expression, and is in her plugsuit. Kaworu in sitting with his elbow propped up on his knee, wearing the school uniform, and smiling out at the viewer For those familiar with the anime, he looks somewhat thinner and larger eyed.The main color is red.

This is the blurb that was on the back:

Pride in being an Evangelion pilot-that is the essence of the second Child, Soryu Asuka Langley. But the day she was chosen to be so was the most horrible of her life-and as that truth rises to consume her, Shinji finds a new comrade in the strange, beautiful, and distrubing Kaworu Nagisa. Born on the day of the Second Impact, he has been sent directly for SEELE, which alone knows him by his real name-Tabris, the Angel of Free Will.

This is the volume of Evangelion where the differences between the manga and animation really shines through. Saying too much would ruin the plot, but expect major differences in events- mostly due to the differences in personality that everyone already underwent in earlier books. which is better relies entirely on individual preference- I was displeased, but only because Kaworu is my favorite character and I feel he is no longer anything like the character in the anime. The alternate scenarios used, however, are surprising and enjoyable, and for those who are jadedly anticipating a simple repeat of the anime story, prepare to be stunned. Some huge key changes lie in Kowaru and Shinji's meeting, Asuka's past, and the level of devastation after a certain Angel Attack. An afterword by Carl Gustav Horn does a good job of summarizing and analyzing the what and why of Yoshiyuki Sadamoto changing what he did, as well as drawing connections to a mark twain novella, "The Mysterious stranger.

There is one major annoyance that has nothing to do with the quality of book, but with the author and publisher; reaching deadlines. I bought my manga from another seller because Viz, for some reason, had problems with reliable distribution until more than a month after the initial release date. Borders sold out quickly and could not restock for the longest time. At the same time, the next volume of a manga usually takes around a month to 3 months to be released. I think the time between 8 and 9 was about 5 months. And now according to the book itself, Yoshiyuki Sadamoto hasn't worked on the manga in japan for 8 months. That means it may take as long as a year to two years for the next book to be translated into english. But I guess most diehard Evangelion fans will endure the wait...
Read more
25 people found this helpful
Helpful
Report abuse

Christy
3.0 out of 5 stars Kaworu
Reviewed in the United States 🇺🇸 on February 26, 2018
He’s a psychopath. His weird vibes freak everyone out. He straight up kills a kitten Shinji had with him when they first met. Who is this guy?
Read more
Helpful
Report abuse

Zach
3.0 out of 5 stars Not a good price
Reviewed in the United States 🇺🇸 on December 5, 2012
Not sure why this manga is so expensive, it's not rare anymore. You can get it from Viz Media's website for $5 now.
Read more
One person found this helpful
Helpful
Report abuse
See all reviews