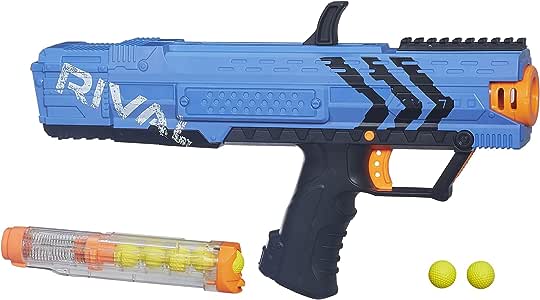 by NERF
4.2 out of 5 stars 367 ratings
| 31 answered questions
Currently unavailable.
We don't know when or if this item will be back in stock.

Experience intense head-to-head competition with the ultimate precision and power of the Nerf Rival Zeus MXV-1200 blaster! Choose a blaster color and go into battle as the Red Team or the Blue Team. The Zeus MXV-1200 motorized blaster fires at a velocity up to 100 fps (30 mps). It comes with an easy-load magazine and 12 high-impact rounds. The blaster has a trigger lock, tactical rails, and ambidextrous magazine release. Experience the intensity of Nerf Rival with the Zeus MXV-1200 blaster! Nerf and all related properties are trademarks of Hasbro.

4.2 out of 5 stars
4.2 out of 5
367 customer ratings
How does Amazon calculate star ratings?
Amazon calculates a product’s star ratings based on a machine learned model instead of a raw data average. The model takes into account factors including the age of a rating, whether the ratings are from verified purchasers, and factors that establish reviewer trustworthiness.

Summary:
Pump-action. Shoots round Nerf projectiles, rather than darts. Comes with a 7 round magazine, but they make 12 round magazines for it, which I ordered with this. It has a safety, which is the first time I've come across a safety switch on a Nerf blaster. Maybe that is unique to this line of blasters? I don't know. This is my first from the Rival line.

Pros:
-The range/velocity is tough to beat. It seems to have a very strong spring and I've heard no air restrictor (I have not opened it yet). Also, the projectile is denser than the darts, so it carries further.
-If you buy the 12 round magazine, as well; that comes with a rail-mounted holder for the magazine. So, you can carry your spare mag on the blaster. I really like that. So, I load my 12 round mag in the blaster, and keep the 7 round mag on the top rail. The way the magazine is shaped, the rail-mounted mag also doubles as a sight, which is handy.
-The ammunition seems to veer off course less often than the darts do. Probably because if a dart is misshapen, that drastically impacts the flight path. Also, the darts are probably more likely to deform.
-This ammunition seems to deform less when left in the magazine for a long time. I still wouldn't recommend leaving them in over-night, but if you forget, you haven't ruined a bunch of ammo.

Cons:
-The slide for the pump is mounted on the top, and has a really dumb shape. If it has to be on the top, make it more like a pump, instead of a rail. I don't mind the lever idea, but place it on the side of the blaster. On the top, it covers up the sight. If you mount a magazine on the top, this sight compromise is not an issue, because the magazine can be the sight.

That's really my only gripe. Other than, I guess the safety switch is irritating. I might remove mine. It's not like this is a lethal weapon. This is a really nice blaster. There is no need to mod it for power. To be honest. I wouldn't recommend it for little-ones. Don't forget eye protection either.

I do plan on opening it to have a look at the barrel. With the round ammunition, I think there is an opportunity, here. I'm going to see if I can fashion a barrel attachment that will spin (NOT rifle) the rounds coming out. Basically, keep one side smooth, and the other side ribbed. Then, we ought to be able to make this thing shoot around obstacles, if the ball is spinning when it exits the barrel. A spinning ball should also make for more predictable trajectories and make it more accurate, as well. If the ball comes out with no spin like a knuckle-ball, it tends to wobble in the air. But if you spin it, it should be more predictable. I'll edit this post if this is feasible.

Peter Q.
3.0 out of 5 stars Hype train was a little disappointing
Reviewed in the United States on December 1, 2017
Verified Purchase
You know...there's a ton of amazingly positive reviews out there and I've found that this one just isn't for me at all! This is a decent nerf blaster. It shoots very hard, not so much you'd have to worry about it hurting (other than your eyeballs), but it's notably faster/harder than your run of the mill nerf blaster and even a bit more than others in the Rival line. That's about the only positive I have. Things I didn't like, the overall smoothness and force required to prime leaves a lot to be desired. It's a tough prime for a hard hitting nerf blaster, but the ratcheting of the gears makes me wonder if I'm priming it correctly. Then you have to push the hook forward as there's no return spring. Tons of people are okay with it, but it definitely didn't vibe with me at all. The magazine didn't quite fit properly at first. It took a little wearing down the magazine or the handle a bit before the magazine started to go in smoother. It's still a little rough, but it improved after I used it for awhile. These days you can find an Artemis for around $30 and that monster holds 30 rounds without having to carry extra mags (because you can't) but I digress. I think there's better out there that's just a bit more expensive.
Read more
3 people found this helpful
Helpful
Comment Report abuse

Logan Zytes
5.0 out of 5 stars A great toy for that big kid in all of us
Reviewed in the United States on August 7, 2017
Verified Purchase
I am a big kid at heart and when I heard about the new Nerf Rival system, I just had to try it. I figured I would start off with the Apollo since it was a manual load and fire style. I was very impressed with the range and overall accuracy of this toy gun. My first experience at loading saw the gun jam but a quick venture onto YouTube helped solve that issue immediately. I have had absolutely no issues since. Easy to load, easy to cock back. and very fun to fire. My cat loves to chase the little yellow balls after I fire them. I do not think that the ammo used is overly hard and it did not sting when I shot myself...yes I did it for research and for science! Seriously though if you are going to get one of these for a battle, I strongly recommend a face shield. A direct hit in the eye could prove dangerous because they do pack some punch.
Read more
3 people found this helpful
Helpful
Comment Report abuse

QT
4.0 out of 5 stars Almost as forceful as a paintball gun
Reviewed in the United States on December 17, 2017
Verified Purchase
This has force. Certainly not a nerf gun to be pointing at anybody unless you are in protective gear. The force can almost be compared to an actual paintball gun. I took a regular nerf gun and aimed it at a target. If I missed the target the nerf bullet gently bounces off and lands somewhere nearby. Not so with this Nerf gun. If you shoot at a target take cover. It will ricochet and sometimes come right back at you with just as much force as when it came out of the gun. Otherwise, forget looking for the bullet as it will be long gone. Definitely not a nerf gun to play with while shooting at each other in close range. The bullet is soft, but you must wear goggles as it can easily damage your eyes. You will feel the impact, but it doesn't make welts like a paintball does. Definitely not for young kids by any means. It is definitely a great substitute for a paintball gun...it has long range and doesn't make you get welts.
Read more
One person found this helpful
Helpful
Comment Report abuse

timothy.p.marchant
4.0 out of 5 stars Having fun with my 8 yr old!
Reviewed in the United States on February 14, 2017
Verified Purchase
My son and I are enjoying battling one another with these blasters. The balls shot out fast and are pretty accurate. The cocking mechanism is a little weird but nothing my 8 year old son can't handle!
Read more
9 people found this helpful
Helpful
Comment Report abuse

Scott C
5.0 out of 5 stars This is a MUST BUY
Reviewed in the United States on March 4, 2016
Verified Purchase
Best, Best, Best nerf gun on the market. The ammo system for this Nerf gun makes it soooooo good.

Pros:
High velocity (these things come out fast!)
Accuracy (far more accurate than traditional darts, having to prime between shots does add some difficulty though)
Easy load magazines (soooooo much easier and faster than traditional darts)
Ammo can be used in slingshot (trust me, this is awesome)
Ammo can be thrown
Can easily tell when hit (has some force)
Trickshots (around corner shots, off the ceiling, etc..)

Cons:
Eye protection highly recommended for all foes (kids like head shots)
Prime can be difficult for younger ages (my 9 year old girl can do it though)
Can sting when hit (from close ranges with thin clothing)
Guaranteed to lose lots of ammo (comes out fast, goes far, and they roll)
Read more
36 people found this helpful
Helpful
Comment Report abuse
See all reviews from the United States
Pages with related products. See and discover other items: all hasbro games, nerf battle, nerf blasters under 20 dollars