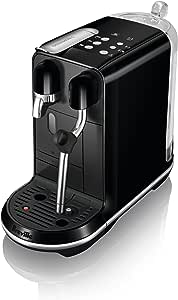 Visit the Breville Store
4.7 out of 5 stars 1,082 ratings
Amazon's Choice recommends highly rated and well-priced products.
Amazon's Choice for "creatista uno"
Available at a lower price from other sellers that may not offer free Prime shipping.

A cup of coffee is much more than a break. It is your small ritual. Make it an unparalleled experience. Choose Nespresso, do not settle for less: specially-selected coffee coming in a range of exclusive varieties, coffee machines combining smart design with simple state-of-the-art technology, refined accessories, indulgent sweet treats and services anticipating your every desire. What else?

New From Nespresso & Breville.
The Nespresso Creatista Uno, a new addition to the Nespresso OriginalLine range, is an intuitive machine that allows you to create 8 barista-quality espresso and milk recipes at the touch of a button. It has a premium design and finishing to help personalize your favorite coffee occasion.

4.7 out of 5 stars
4.7 out of 5
1,082 global ratings
How are ratings calculated?
To calculate the overall star rating and percentage breakdown by star, we don’t use a simple average. Instead, our system considers things like how recent a review is and if the reviewer bought the item on Amazon. It also analyzes reviews to verify trustworthiness.

Jlk651029
5.0 out of 5 stars 2-time Nespresso machine owner
Reviewed in the United States on April 5, 2018
Color: Royal ChampagneStyle: Machine Only
I would've purchased this machine from Amazon had I not happened to pass by a Nespresso Boutique inside the local mall. In all honesty, I was reluctant to give them another try; I had purchased De'Longhi Nespresso® Lattissima machine back in 2012, a machine I ended up loathing. My concerns with the 2012 Lattissima purchase was that the milk temperature turned out lukewarm - every time. I explained to the Nespresso gentleman working that day that I probably should've returned that machine while it was still under warranty, but that life happened and it ended up being stored away, unused for x amount of years. Having read similar reviews (producing lukewarm lattes, at best) on that particular machine and feeling jipped outside of warranty, I went back to my usual at Starbucks and forgot about Nespresso's existence (or tried to, as I had spent $500 on the Latissima at that time).

The gentleman explained the machine should have been fine, etc - but that if I was to give Nespresso another shot, he'd recommend the Creatista model, guaranteeing the milk/espresso/latte temperature would indeed be hot, and that one of the best features re: this machine was the easy cleanup (I had mentioned the Latissima was a pain to clean). The gentleman showed me how the Creatista works (display model in store), and brewed me an Arpeggio cappuccino at the highest temperature setting.

Not only was the temperature exactly how the Latissima should have been, but the texture of the milk from the wand-- was perfect. Moreover, I was impressed all I'd need to do post-brewing was to wipe down the wand with a wet cloth/paper towel, as the wand purges water post-brewing to clean itself.

Having felt I had received an honest opinion on which model I should consider, and having had the chance to see the machine work (and test the taste of a cup of cappuccino) in store... I was convinced it was worth the right investment; ended up walking out of the store with the Creatista in Champagne that day.

It's been about a month since my purchase. I haven't had any problem with it thus far (may update my review should I encounter any problem down the road), and can honestly say I am 100% satisfied with this machine in every way, shape, and form. It brews the perfect ristrettos, espressos, lungos, flat whites, and the list goes on... every time. I haven't stopped by a Starbucks on my way to work since having invested in this machine, and would recommend this to all espresso connoisseurs. Happy brewing!

Jeremy Beck
5.0 out of 5 stars Not Bad - One of my Favs
Reviewed in the United States on July 23, 2019
Color: Stainless SteelStyle: Machine OnlyVerified Purchase
So I have owned a lot of machines from a Nuova Simonelli Aurelia (world barista championship machine) which required a 20amp circuit installed at my house to a lot of the lower end machines like the Brevilles and Delonghi (not a fan of Delonghi). You never buy a pod machine to save money - you buy it to save time. I think they figured if you bought Nespresso brand coffee pods you're essentially paying around $50 or so dollars a pound which is crazy expensive. Yet when you compare the convenience of a good latte that costs you near a dollar with a $5-7 with tip coffee at starbucks, you're doing ok.
So what do I think of this machine? I actually really like it. I can make a latte in the time it takes my other machine to warm up. This machine takes 3 seconds to go and my other machine - I need to grind, tamp and then it still takes my other machine roughly 30 seconds to heat up. It could probably make a few cups before my professional machine even warms up. I love doing things myself and enjoy the art of the grind, the tamp, adjusting for weather and knowing my skills but honestly sometimes I just want a quick, consistently good latte or flat white. The machine definitely delivers there. I love how hot it makes the shot, I love how adjustable everything is, and I love that I can make a coffee two minutes before a meeting. (I can't even get my other machines warmed up) I bought one for my work and brought it home and my wife loved it so much she asked me to leave it. I ordered another for my Dad because he loved mine so much I had to get him one. The settings that work for me are flat white - milk level 2, latte milk level 5, and cappuccino milk level 8. They closer to the real deal with those settings. Please don't judge my poor latte art - I was just trying a few with the machine and thought I would post them to show how close to the real thing you can come with this machine on the first go... I'm sure if I gave it a few tries - I could probably get them a bit more symmetrical. The point is - you can still have fun with it.
So maybe you're wondering - does it match a full professional machine? First off - of course not - I can do a better shot, have more options, and can do a lot more with latte art and milk texture on a real machine. I can get a lot better and more authentic crema on a professional machine. On a professional machine I can choose exotic beans and experience crazy weird taste and half the fun of coffee is making it. (nespresso has quite a variety though which is worth trying - including some good third parties like Pete's, ect) That being said - It's not supposed to compete with a professional machine. It's a home machine under $500. We're talking a HUGE price difference to a professional machine which can range in the 10-15k range for a good one like the Aurelia. (And you still need to buy your Mazzer grinder for 1-2k!) it's a lot of work and expensive to own a professional machine. I also find I can waste more on a coffee machine - you need to drink enough to get through a bag of beans before they get past the first month of roast.
So if you want a good machine, that makes decent espresso, and can do it consistently well, and extremely fast. I think this is an excellent addition to any home.
Read more

Jeff
5.0 out of 5 stars Awesome Machine
Reviewed in Canada on November 27, 2019
Color: Stainless SteelStyle: Machine OnlyVerified Purchase
The Nespresso Creatista Plus is an awesome machine. We love it. Compact, pretty and the most important thing is it makes awesome coffee. If you don't like milk type coffees I wouldn't get this only because they have some slightly cheaper ones without all the extra's for making milk based coffees. The wand does get clogged up when making a lot of milk based drinks but you just have to clean it with the pick provided. Everything is easy from set-up to making the coffee. If you are looking for a good machine making latte's etc. I would highly recommend this one.
Read more
4 people found this helpful
Report abuse

Amazon Customer
5.0 out of 5 stars A great machine!
Reviewed in Canada on November 29, 2018
Color: Royal ChampagneStyle: Machine OnlyVerified Purchase
We have tried all selections on the machine and it seems to work perfectly. We are very pleased with it. Takes no time to start up. Very intuitive to use. Considering machines, I was concerned about the milk frothing. This could not be easier, with the temperature sensor. Very easy to adjust coffee volume per pod and milk temperature for each selection. It looks impressive and for so many functions takes little space.
Read more
2 people found this helpful
Report abuse

Wynn
5.0 out of 5 stars easy 15 minute cleaning
Reviewed in Canada on March 8, 2018
Color: Stainless SteelStyle: Machine OnlyVerified Purchase
This machine is worth every penny. Milk froth, can control temperature and froth level, comparable to barista. Expresso is hot, I do not use a capsule and prime, warming my cup, then make expresso. Nespresso capsule samples come with the machine, which range from intense to mild.
Much more convenient, can have expresso, latte, cappuccino or macchiato any time I want. A lot cheaper than going to the other place (Also have decaf variety, so can have one at night). No tasting 'the capsule' only expresso. Will tell you when to descale, easy 15 minute cleaning. Have owned another expresso machine and just love the convenience of the Creatista Plus. Within a couple of minutes you are having your drink.
Read more
5 people found this helpful
Report abuse

Colette
5.0 out of 5 stars Love the Creatista
Reviewed in Canada on March 10, 2017
Color: Stainless SteelStyle: Machine OnlyVerified Purchase
Love the Creatista, we have been a fan of Nespresso for years and decided to treat ourselves with the Creatista Plus. The milk frother is so much easier to clean and use than the frothers that come with the Nespresso machines. It basically tells you when you have to descale or clean the milk frothing nozzle. The water tank is way bigger that any other Nespresso machines we have owned which is a plus. We have had our machine since Christmas and have had no regrets.
Read more
6 people found this helpful
Report abuse

Jay B.
5.0 out of 5 stars Best of the best. #1 Espresso machine on market.
Reviewed in Canada on April 6, 2019
Color: Stainless SteelStyle: Machine OnlyVerified Purchase
As good as it gets. This machine makes an espresso or latte cappuccino with unbelievable taste and consistency. Would highly recommend this machine to anyone who might be on the fence. It is super easy to use and the screen adds a nice touch to simplicity.
Five stars and beyond.
Read more
One person found this helpful
Report abuse
See all reviews