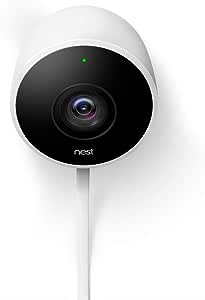 Security has never looked so good. Meet Nest Cam Outdoor. It stands watch 24/7, rain or shine. Plugs into power so you never have to worry about dead batteries. And sends an alerts to your phone when it detects activity.* It even lets you talk back through the Nest app. This is what an outdoor security camera should be.

This product contains a chemical known to the State of California to cause cancer and birth defects or other reproductive harm. For more information go to www.P65warnings.ca.gov

4.2 out of 5 stars
4.2 out of 5
4,979 customer ratings
How does Amazon calculate star ratings?
Amazon calculates a product’s star ratings based on a machine learned model instead of a raw data average. The model takes into account factors including the age of a rating, whether the ratings are from verified purchasers, and factors that establish reviewer trustworthiness.

Really wanted to like this item, and I would have written a glowing review during the 30 day Nest Aware trial period. Installation was relatively easy (more on that later), and the app worked wonderfully, as did viewing of historic footage. Clearly my home internet was quite capable of delivering the upstream needed, and I viewed the cam from a number of different apps and internet connections without issue and with very limited buffering (1-2 seconds at the most, one time). Alerts worked great.

After the trial period ended and Nest charged me for my first month of service, everything went downhill. Alerts stopped firing. Viewing live was impossible. Viewing historic footage became impossible. The buffering wheel became my best friend. Nest said it was my internet connection, either on the camera or wherever I was connecting from. Nothing had changed on my home network, and I was accessing the camera over 50+ gig LTE and from a business fiber connection, same as before the paid period started, along with the issues. This was NOT on my end, but they refused to continue to help me because it was an internet issue "on my end". Throughput on my home network is the same as it was a month ago. My downstream speeds are the same at the other locations as they were a month ago.

From here, Nest basically ignored the issue, and a quick search reveals this is NOT an uncommon problem. Think about millions of these cameras, each uploading 300 GB of data per month, and millions of users trying to stream that data--I just don't think Nest has the hardware infrastructure to serve that sort of data load, and the company just gives you a "priority lane" during the trial period to fool you into thinking the service is reliable until your return period has ended.

As to installation--Everything was easy and straightforward except for the power cable design. On one end is a huge white block of plastic--the camera. On the other, a huge white block of plastic surrounding a USB plug in the interest of weatherproofing it. This is a wire you're going to have to pass through an opening in your house's structure, and they made the thing nearly an inch in diameter, requiring you to drill a MUCH larger hole than is actually necessary. Luckily, I was able to go in through a plastic attic vent in the eave and down through sheetrock, but it was far more complicated than it should have been, since I was replacing a camera with a normal DC barrel connector wire and had to enlarge all the pass-throughs.

Also, watch your fingers around the magnet mount.

M. Brown
5.0 out of 5 stars Theft caught on video
Reviewed in the United States on December 13, 2016
Style: 1 Pack Outdoor Camera
Had a Christmas package stolen form my driveway, because of the camera we were able to identify the license plate and the thief which ultimately resulted in his arrest. My package was recovered. I posted the video on social media and people were amazed at the quality.
Read more
924 people found this helpful
Helpful
Comment Report abuse

Elijah Fulton
1.0 out of 5 stars This COULD be the best with a few changes to the services.
Reviewed in the United States on March 9, 2017
Style: 1 Pack Outdoor CameraVerified Purchase
If you don't plan on paying for nest aware which is either $100/year or $300/year then this camera isn't very useful. You will either get too many annoying alerts that aren't important or basically no alerts. They don't really tell you how bad the camera is without nest aware.

Without Nest Aware.
You only get live feed with video.
You get (Some) snapshots of alerts. You can only look at the previous 3 hours.
No Zone alerts. (This means you're probably going to get a lot of annoying alerts that don't matter to you, or you can basically not get any alerts)
Since you only have picture snapshots, a lot of alerts won't even have anything in the picture because the motion detected it too late. It also makes it hard to tell what the EVENT is sometimes.

Easy Solution to make this $200 hardware usable...
1) Allow zone alerts.
2) Instead of photo snapshots, make 5-10 second video (that starts just before the motion activation was triggered).
3) Keep more than 3 hrs. I think 24 hrs is the least you should do.

cssmgt
1.0 out of 5 stars I love it, I hate it - Nest Aware service needs more subscription offers
Reviewed in the United States on October 25, 2016
Style: 1 Pack Outdoor CameraVerified Purchase
I have mixed emotions about this product for a number of reasons. I bought 5 of these with the intention of installing all of them on the same day, so far I installed 2 - I might return the rest. The good - it was very simple to install, offers great video and audio quality, great features for motoring and play back, 2 way audio etc. I was doing some research and this is probably one of the best security cams out there. If you have a strong WiFi signal in many areas (I have access points all over my property) of your home and a power outlet you are good to go. No worries about changing camera batteries, connecting to a proprietary hub with a limited range, etc. Pretty much it is plug and play, almost. The bad: Had issues with the Nest app setting up my first cam on my iPhone (iOS 10) - the app just hung on Looking for WiFi networks. So I plugged the USB end of the cam into my computer, ran the .exe and set it up that way. The USB power connection with the cylinder lock mechanism from the camera to the power connector caused me to drill a hole much larger than theoretically needed when installing the camera wire through walls. They should have offered some sort of disconnect or a locking plug-thing on both ends that way you don't have to drill such a large hole to feed it through. Once I had it installed it worked but then stopped. I needed to reboot my router and change the WiFi channel from 1 to auto - so far so good. My biggest gripe is the Nest Aware cloud storage service to provide monitoring features and storage of your history. I found this out AFTER I bought the product - they need this information to be clear in the description of the product on Amazon's site as it is no where to be found. The problem is that they only offer 2 cloud storage option subscriptions to store your history with their Nest Aware cloud storage offering. Don't get me wrong you get some great features for it but those prices are also a bit high for cloud storage especially if you have multiple cameras. Here is the break-down: Currently as of 10/24/2016:

OR - They also have:

This is ridiculous for home consumers who want simple home security. I used this for home security, if nothing happens on that day - it can be overwritten the next day for all I care. Nest - please make a subscription option for home security for owners to choose how much storage they want or offer and entry level package to store 1 or 2 days storage at a reasonable price.

I found out that if you contact Nest and make this suggestion - they will provide your feedback and report it to the Sale organization for consideration. I lived chat with a Nest rep yesterday and that is what he told me.
Read more

Matt Ford
4.0 out of 5 stars Great camera, but cable not thought through.
Reviewed in the United Kingdom on September 28, 2017
Style: 1 Pack Outdoor CameraVerified Purchase
The cable is not well thought out at all one end is a massive USB connection, the other is a plug - not sure how you are meant to get this through a wall, other than cutting the cable and then rewiring the plug. Not what you would expect from £170 camera -.-

Having said that, it is an excellent camera, yes you need to factor in the cost of the Nest Aware service, it is not optional if you intend to use for anything serious. Buying another one.
Read more
5 people found this helpful
Helpful
Sending feedback...
Thank you for your feedback.
Sorry, we failed to record your vote. Please try again
Report abuse

Page 1 of 1 Start overPage 1 of 1
This shopping feature will continue to load items when the Enter key is pressed. In order to navigate out of this carousel please use your heading shortcut key to navigate to the next or previous heading.
Back
Next
Pages with related products. See and discover other items: magnetic camera mount, car system, wifi sticks, farm doors, cameras with wifi built in, arlo go