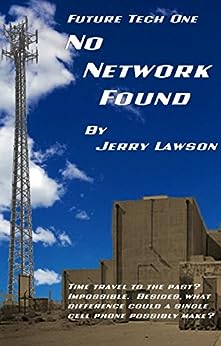 Les Lynam
4.0 out of 5 stars Yes, Virginia, there WAS a cold war.
Reviewed in the United States on October 30, 2015
Verified Purchase
I make no bones about favoring Time-Travel stories, and this series is shaping up (I think) to be an altered Time-line tale. I suppose that's one of the things I DIDN'T like about this book, no real resolution to the main event (a fully loaded cell phone popping into 1954).

I often read other reviews, mostly to make sure that I'm NOT parroting something already said, and was amused by the solitary single star review on Amazon. The reviewer took umbrage at the disparaging remarks President Eisenhower made of some of his Democrat successors. The president was Republican. Did you EXPECT him to having glowing praise of Johnson or Carter? To blame the author for those remarks is rather nearsighted, I think.

In general, I thought Lawson's coverage of the 50s was pretty good. I think his handling of the Red Menace was perhaps a little light-handed. This story takes place in 1954, one year after Josef Stalin's death. Nikita Khrushchev was still a largely unknown equation at the helm of the USSR, but the Cold War was in full swing, and the Korean War was barely over. I think the Eisenhower administration would have been TERRIFIED by the thought of any advanced technology.

Another thing that I didn't like about this story was the set-up (in 2017) for WHY the cellphone popped into 1954. I felt that part was contrived and not readily believable. I personally would have been just as happy with NO explanation, since the people of 1954 didn't have one. Could have added to the mystique of the phone itself. WHY would someone send all that data to the past? Did they WANT to change the timeline? Why?

I will probably eventually read the other books in this series, just to finish the story that No Network Found begins.
Read more
Helpful
Report abuse

Bhakta Jim
5.0 out of 5 stars Great verisimilitude!
Reviewed in the United States on May 26, 2015
Verified Purchase
The author of this book gives verisimilitude to a neat premise. You've read stories about people discovering alien technologies, but this is a story about people in the past stumbling on an all-too-familiar technology, complete with books that explain events in their own future. The author describes the events happening in 1954 so well that I can believe that they would happen exactly that way. He knows a great deal about the technology of that day and he gets the details right, or at least makes them convincing.

I used to read a magazine called Analog (named back when the word "Analog" sounded futuristic, instead of obsolete) and one of its critics described it as "the one with the rivets". Its competitor, Galaxy, specialized in more literate fare. Analog was for the hard science fan. I read and loved both, and I still enjoy a story with some rivets. This story has rivets. I will probably buy more installments in the series, something I've resisted doing for many other authors.

The author's politics are more conservative than my own, but that is forgivable.
Read more
Helpful
Report abuse

Keith Glass
5.0 out of 5 stars Amazing Inversion of the "Six Books Game".
Reviewed in the United States on April 4, 2014
Verified Purchase
For those who don't know it, the "Six Books Game" was a mental game, back before the advent of digital books. The premise: You're going into your bomb shelter, or boarding your starship, and you can take 6 books with you, no more. Which books do you take ??

This is the flip side: A veritable library of books, from 60 years into the future has arrived. How will it change the world ?? A rather compelling tale of the beginning days of just such an event. What would today be like, if we knew how the experiments of the 1960s turned out ? If we had the basic knowledge to build 21st Century tech, 50 years earlier.

I'm impressed, have already bought the second volume of the series, and will be watching for other works by Mr. Lawson. . .
Read more
Helpful
Report abuse

David Hopkins
1.0 out of 5 stars Promising story, amateur attempt
Reviewed in the United States on May 11, 2015
Verified Purchase
Very interesting story idea and, in more capable hands, it could be done very well. Mr. Lawson's attempt felt extremely amateurish to me. The story was rushed and terribly underdeveloped. I did not feel transported to the 1950's at all and found it difficult to believe that the characters at that time could so easily pick up on the nuances of modern times, like figuring out what LOL means in a text message. The breaking point for me was the description of the presidential succession after Eisenhower. Could the author be any more obvious about his political leanings? In my opinion, the novel is worth exactly what I paid for it...$0.00.
Read more
One person found this helpful
Helpful
Report abuse

James D. Young II
5.0 out of 5 stars An excellent beginning
Reviewed in the United States on November 4, 2013
Verified Purchase
A wonderful examination of the question "What would you do if knowledge of the future was dropped into your hands?" The story moves on well without over use of the "deus ex-machina," if you exclude the mcguffin that forms the centerpiece of the story. An easy read without being childish, the audience is expected to follow along and keep up. At the end I was ready for more, always a great sign in a novel. Excellent first novel. So, where's the rest of it?
Read more
One person found this helpful
Helpful
Report abuse

M.A.D.
4.0 out of 5 stars Nice, light story. Quick read.
Reviewed in the United States on March 17, 2017
Verified Purchase
Good story about changing the future with the discovery of a cell phone from the future.
Read more
Helpful
Report abuse

Richard Allen
5.0 out of 5 stars What if?
Reviewed in the United States on October 8, 2013
Verified Purchase
I just love books that make me start asking questions- and this one is a festival of "What if?" Not the "what if" of doing things differently, but the "What if?" of having access to different knowledge. Funny, quick-paced, and unexpected, I eagerly await the next installment!
Read more
2 people found this helpful
Helpful
Report abuse

Imaginos
5.0 out of 5 stars Five Stars
Reviewed in the United States on May 30, 2015
Verified Purchase
A neat concept that is very well executed
Read more
Helpful
Report abuse
See all reviews