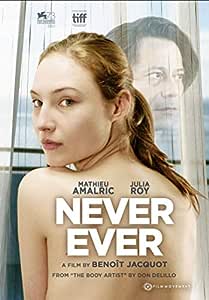 Mathieu Amalric (Actor), Benoît Jacquot (Director) Format: DVD
1.7 out of 5 stars 3 ratings
Available at a lower price from other sellers that may not offer free Prime shipping.

Based on Don DeLillo's novella The Body Artist, Never Ever swirls around a self-centered filmmaker (Mathieu Amalric) who, during a screening of one of his films, wanders into an adjoining gallery and becomes mesmerized by a young performance artist (Victoria Guerra). Dumping his leading lady and long-time lover, Rey embarks on a wild and delirious affair with the equally willing Laura, who jumps on the back of his motorcycle and rides with him into instantaneous love. Holed up in Rey's remote country mansion, the couple appears to have found bliss until, one day, Laura is disturbed by strange noises that turn out to be a prelude to disconcerting developments. The dreamlike world the two have constructed slowly begins to come apart.

[B]reakout scripter-star Julia Roy...adds her own enigmatic shading to proceedings via her terrific leading turn as a grief-stricken performance artist preserving her husband's presence in more ways than one. --Guy Lodge, Variety

1.7 out of 5 stars
1.7 out of 5
3 customer ratings
How does Amazon calculate star ratings?
Amazon calculates a product’s star ratings based on a machine learned model instead of a raw data average. The model takes into account factors including the age of a rating, whether the ratings are from verified purchasers, and factors that establish reviewer trustworthiness.
Top Reviews

Veronique
1.0 out of 5 stars Lost Patience after 5 Mins.
Reviewed in the United States on September 24, 2019
Verified Purchase
No dialogue for a huge amount of the film. I lost patience.
Read more
Helpful
Comment Report abuse

Amazon Customer
3.0 out of 5 stars very experimental, kinda spooky
Reviewed in the United States on September 30, 2019
Verified Purchase
It was interesting once the wife became the main character. Experimental uses of sound and editing to talk about grief and loneliness, a take on the haunted house trope. Super pretentious, but worth sitting through if can because it gets good eventually.
Read more
Helpful
Comment Report abuse
See all reviews from the United States