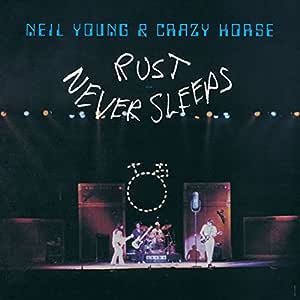 Reissued in 2017! Incredible 1979 album of live and studio recordings. Includes "My My, Hey Hey (Out Of The Blue)" and "Pocahontas".

4.6 out of 5 stars
4.6 out of 5
445 global ratings
How are ratings calculated?
To calculate the overall star rating and percentage breakdown by star, we don’t use a simple average. Instead, our system considers things like how recent a review is and if the reviewer bought the item on Amazon. It also analyzes reviews to verify trustworthiness.

Gordon Hoffman
5.0 out of 5 stars One of my favorite albums. Neil Young at his best.
Reviewed in the United States on August 2, 2018
Verified Purchase
"Rust Never Sleeps" is one of Neil Young's seminal albums. Backed by Crazy Horse, he displays his acoustic skills on the A-side (on the original vinyl-tracks 1-5 on the CD/MP3) and his electric skills on the B-side (tracks 6-9). "Hey, Hey, My, My" provides one of the most memorable lines in Rock lyrics, "It's better to burn out than to fade away." Kurt Cobain certainly took it to heart, as he included it in his suicide note. "Powderfinger" captured the attention of reviewers worldwide with Rolling Stone magazine stating it to be "one of the top 10 songs" ever written. It is one of my favorite albums, and I listen to it regularly. I also recommend "Harvest," "After the Gold Rush," & "Harvest Moon" all available on vinyl, CD, or MP3 on this site. There are many more albums I haven't listened to yet. Young is such a prolific writer/performer.
Read more
5 people found this helpful
Helpful
Comment Report abuse

SeattleRaybo
5.0 out of 5 stars Luckily, the MP3s were included with the CD purchase
Reviewed in the United States on July 11, 2019
Verified Purchase
Great album.
Luckily, the MP3s were included with the CD purchase, since Amazon sent the wrong CD. Instead of this album, they sent "Jack Bruce - Harmony Row". Picture uploaded.
Since the MP3s of Rust Never Sleeps were included with the purchase, I figured no harm no foul, and maybe I'll be pleasantly surprised by this Jack Bruce guy, and went ahead and popped it into the player.
Wow, I'll never be able to get that time back. Jack Bruce needs to keep his day job. Seriously, I figured at the least I'd be able to listen to the first minute or so of each song. Nope. Couldn't even listen to the first 15 seconds of each song. I quit at around track 6. Yikes. Well, I think I can use it for target practice.

Amazon Customer
5.0 out of 5 stars Live records rule!
Reviewed in the United States on March 23, 2018
Verified Purchase
Obviously, this album is a classic that still resonates well today. My favorites are "Powderfinger" and "Sail Away," but who doesn't love some "Hey Hey, My My?" Kurt Cobain didn't put those lyrics in his suicide note for nothing. Some people will say this album is not as good as Live Rust, but I disagree, but I guess they're both really great. In today's new music a good live album seems to be few and far between. Nothing beats cranking up this record with a cocktail on a Saturday night after the bars. Listen to this and you'll know why Neil Young was called the Godfather of Grundge!
Read more
3 people found this helpful
Helpful
Comment Report abuse

Amazon Customer
3.0 out of 5 stars Great album, TERRIBLE shipping
Reviewed in the United States on June 10, 2020
Verified Purchase
Great album, but when I got it in the mail, it was in a plastic sleeve within a standard bubble wrap envelope. There was no damage fortunately, but it shocked me. It needs to be a standard to use a cardboard vinyl sleeve to ship records. Other than that, the album is fine, just fix the packaging.
Read more
Helpful
Comment Report abuse

Larry Moran
4.0 out of 5 stars If you really enjoy, or love Neil Young, this is for you!
Reviewed in the United States on September 27, 2018
Verified Purchase
Being an older person, the song "Thrasher", means even more to me today. Than it did one this album was originally released. Over the years, I've found the song "Powderfinger", to be particularly poignant also.
Read more
One person found this helpful
Helpful
Comment Report abuse

William A Greiner
5.0 out of 5 stars another great Neil Young album
Reviewed in the United States on November 3, 2019
Verified Purchase
Been looking for this for awhile
Read more
One person found this helpful
Helpful
Comment Report abuse

DJ
5.0 out of 5 stars Love this CD
Reviewed in the United States on March 13, 2020
Verified Purchase
The CD is great, exactly what I wanted. It arrived on time and I would recommend the seller.
Read more
Helpful
Comment Report abuse
See all reviews

The Punk Panther
5.0 out of 5 stars This is the story of Johnny Rotten.....
Reviewed in the United Kingdom on November 15, 2019
Verified Purchase
This is a collection of live recordings by Neil Young that were later enhanced by studio overdubs. The first three tracks are largely acoustic and recorded in early 1978 at The Boarding House in San Francisco. The rest were recorded on the Young/Crazy Horse tour in late 1978. Two exceptions were not recorded live - Sail Away from the Comes A Time sessions and Pocahontas which dates from 1976.

My My, Hey Hey (Out Of the Blue) is the acoustic version of Hey Hey, My My (Into The Black). It has a haunting, mesmeric appeal, enhanced by some excellent harmonica.

Thrasher is a Springsteen-esque (later era) piece of folky country. It has shades of early Dylan with hints of Love Minus Zero/No Limits's rhyme scheme.

Ride My Llama is a deep but acoustic number, with some really sonorous, heavy rhythmic bits thumping behind its plaintive country-ish melody. Again, but in a different way, there is something Dylanesque about this. Another similarity with Dylan is that the first five tracks are acoustic (the old "side one"), while the second side is electric, like Dylan's Bringing It All Back Home.

Pocahontas is another one that you could imagine post 2010 Springsteen doing. It is acoustic as well, but strongly acoustic if you know what I mean. In the lyrics, Young imagines that he was a trapper who got to sleep with Pocahontas. He then imagines "Marlon Brando, Pocahontas and me...". Hmmm, ok Neil. The afore-mentioned Sail Away is a fetching, laid-back folky number with a comforting country air to it.

Right, now it's time for Neil to strap on that electric guitar, get Crazy Horse to join him and give us some of that buzzy electric rock as only he and "The Horse" can. Powderfinger is a Young classic as well. Driven on by a superb riff, enhanced by a big, scratchy guitar solo and some great lyrics, it is up there as one of his best songs. Another corker is the similarly rifftastic and wryly amusing Welfare Mothers . "Welfare mothers make better lovers..." he tells us. You can find them "down at every Laundromat in town...". Really? I never did on any of my weekly visits to the Launderette back in the day.

Sedan Delivery is almost punky in its initial guitar attack and grungy drum thump. In between its frantic thrashing there are some slow, almost sixties psychedelic moments. For a member of rock's old school by 1978, this was incredibly punky stuff. Finally, we get the iconic Hey Hey, My My (Into The Black) with more top class mega-chunky riffs and the mention of Johnny Rotten, "gone but not forgotten", in 1978. Old Neil had his finger on the pulse. He always was "old Neil" as Lynyrd Skynyrd described him, wasn't he? Even when he wasn't that old.

This was certainly an interesting album, but it never really comes across as a "live" album. That sort of feeling is better found on Live Rust, released soon after this.

Paul Warman
5.0 out of 5 stars Lovely re-release
Reviewed in the United Kingdom on February 22, 2019
Verified Purchase
This was a recommendation from the Naim forum and I’m glad I acted on it.
This is how all re-releases should be at a minimum. Well mastered, well pressed and well packaged.
A joy to own and play.
Read more
One person found this helpful
Report abuse

Duncan Light
5.0 out of 5 stars Thrasher
Reviewed in the United Kingdom on July 9, 2013
Verified Purchase
One of my all time favourite albums (this is the fourth time I've bought it). The first half is intelligent, sometimes playful, rustic while the second half is full on electric rock.
Without going into all the songs, a special mention has to be made for Thrasher. On one level it details Young's breakup up with CSN&Y but on another describes the feelings of all many people who have walked away from one form of life to start another. In many ways it is as much a poem as a song. When listening to Thrasher I always want to dig out some road films, such as Vanishing Point, or watch again Five Easy Pieces with Jack Nicholson.
It's difficult to describe just how good this album is (the playing, the singing and the production are great) but I can say, Rust Never Sleeps together with Live Rust, represent some of the bet rock music you will ever hear.
Read more
4 people found this helpful
Report abuse

Amazon Customer
5.0 out of 5 stars Great CD.
Reviewed in the United Kingdom on March 6, 2020
Verified Purchase
Great CD. Great service. Would use seller again and would recommend them. Thank you
Read more
One person found this helpful
Report abuse

Superwolf
5.0 out of 5 stars Legendary
Reviewed in the United Kingdom on August 8, 2020
Verified Purchase
Great Album from a legend. Should be near top of any Neil Young fans list
Read more
Report abuse
See all reviews

Page 1 of 1 Start overPage 1 of 1
Previous page
Next page
Pages with related products. See and discover other items: Crazy Magazines