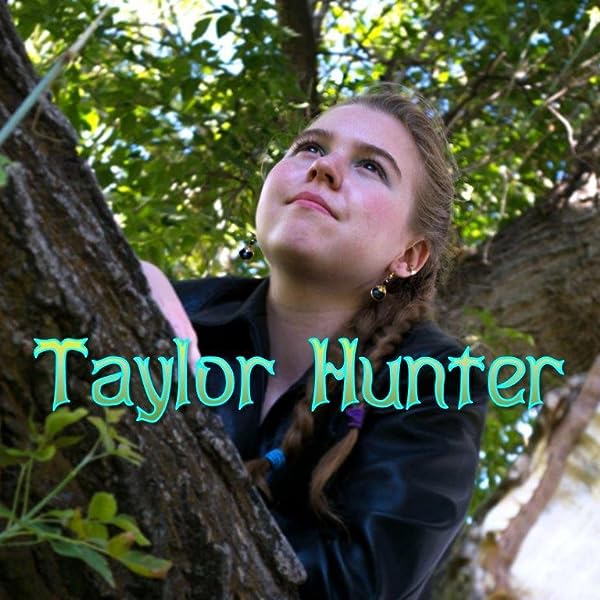 Taylor Hunter is a teenager living in Boise, Idaho with her parents and a lot of pets. Her interests include engineering, ceramics, story boarding, film making, epic fantasy movies, and all things Marvel. She has a green belt in Tae Kwon Do, got her motorcycle endorsement at the same time she received her driver’s license, and is exceptionally accurate with her compound bow.
Start reading on your Kindle in under a minute.

4.5 out of 5 stars
4.5 out of 5
9 customer ratings
How does Amazon calculate star ratings?
Amazon calculates a product’s star ratings based on a machine learned model instead of a raw data average. The model takes into account factors including the age of a rating, whether the ratings are from verified purchasers, and factors that establish reviewer trustworthiness.
Top Reviews

Michael Johnson
5.0 out of 5 stars Truly remarkable and unique book!
Reviewed in the United States on October 20, 2014
Verified Purchase
The characters and the story were very unique, well written and interesting. The story line kept me reading anxiously on to see what would happen next. A truly exceptional book for a young author!!! And perhaps a new genre has appeared on the literary scene!
Read more
Helpful
Comment Report abuse

ShyReader
5.0 out of 5 stars Welcome to the world of the Fae
Reviewed in the United States on May 30, 2016
I received a free copy from this author in exchange for an honest review. Thank you to Taylor Hunter for that.

The beginning of NeverSeen has a bit of a poetic feel to it and it unfolds rather eloquently, then the action starts and the pace picks up, often frantic at times. It's quite a roller coaster of a ride and borders on the cusp of being what I'd define as an epic novel. There are a couple of issues with the story, but they are masked rather well, and I'd rather not point them out and let other readers make their own decision. (nothing major, just a couple of things I noticed).
That being said, I found Emmaline and her two sisters, Ash and Umala, rather likeable (even though Umala is a baby). Emmaline's friends were also likeable for the most part, except for Shade, who constantly taunts Emma. Although this story is a bit too young for me, I can see the younger crowd latching onto it much as they did with Harry Potter or Percy Jackson.Excellent first novel, Taylor Hunter.

Sandy Penny
4.0 out of 5 stars Too Smart, Too Strong, Too Much to be Accepted
Reviewed in the United States on July 19, 2016
A coming of age fantasy adventure in fairyland. Nice descriptions of fairies and their lives and purposes. Seems like pre-teen and teen audience would be most appropriate. Some violence, strong emotions but no sexual content or bad language. As Emmaline comes to terms with how special and gifted she is, those who would use her talents and skills show up to either recruit or neutralize her. A good story dealing with some questions regarding religion, belief, and rebellion against the powers that be. Some funny and clever homages to modern culture. Some challenges with bullying, lack of confidence and self-acceptance. Well done.
Read more
Helpful
Comment Report abuse

Tinyd
5.0 out of 5 stars Excellent
Reviewed in the United States on April 8, 2016
Very good! On the edge of your seat good. I felt like I could relate with the characters; the book was so hard to put down. I am looking forward to reading more books by Taylor Hunter.
I was given this book in exchange for my honest review and very honestly it was very good.
Read more
One person found this helpful
Helpful
Comment Report abuse

Maari
5.0 out of 5 stars Amazing debut!
Reviewed in the United States on April 1, 2016
Very different than any book that I have read before.. The story held my attention and I had to read it in one setting. It did end in a cliffhanger, so I am ready to read what comes next, soon please!?!
Read more
Helpful
Comment Report abuse

Cowgirl
5.0 out of 5 stars A Must Read for those who are Harry Potter fans!!
Reviewed in the United States on November 12, 2014
I thought I would just quickly peruse through the first chapter of this book - and then pick it up for serious reading later when I had more time. I WAS CAUGHT and couldn't put it down!! Incredibly good story and now I CAN'T WAIT for the next book in the series!! I highly recommend this book to everyone who has enjoyed the Harry Potter series. It's THAT good!!
Read more
One person found this helpful
Helpful
Comment Report abuse

Triston Guest
5.0 out of 5 stars A Good Read for Young Adults
Reviewed in the United States on November 1, 2015
This book is a great read for young adults. It has great imagery and scenes, and the action within is detailed as well. From tree cities, to caverns, to magic, and yes, even a colony of nerds, this book is well worth your time.
Read more
Helpful
Comment Report abuse
See all reviews from the United States