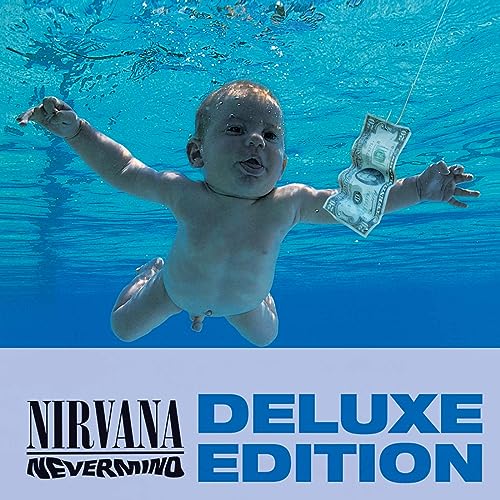 Nirvana
September 27, 2011
4.6 out of 5 stars 2,421 ratings
Buy the CD album for $24.49 and get the MP3 version for FREE.&nbspCD album ships from and sold by Amazon.com. Terms and Conditions. Does not apply to gift orders. Complete your purchase of the CD album to save the MP3 version to your Music Library.

Listen Now
Buy MP3 Album $17.49
Your Amazon Music account is currently associated with a different marketplace. To enjoy Prime Music, go to Your Music Library and transfer your account to Amazon.com (US).

4.6 out of 5 stars
4.6 out of 5
2,421 global ratings
How are ratings calculated?
To calculate the overall star rating and percentage breakdown by star, we don’t use a simple average. Instead, our system considers things like how recent a review is and if the reviewer bought the item on Amazon. It also analyzes reviews to verify trustworthiness.

Blue Cyprinus
5.0 out of 5 stars Great VALUE, Pressing, Remastering, and Extras!
Reviewed in the United States on February 3, 2020
Verified Purchase
First of all, $55 for a 4LP set is a rare and fantastic value in modern new vinyl. I already had the 2015 Geffen pressing of Nevermind and held off on this purchase. What did it for me were the excellent reviews of this pressing, remastering, packaging, and getting Aneurysm (one of their best songs) on vinyl without having to get Incesticide -- an "album" with some interesting inroads, but only for the hardest core.

And nearly 30 years after first listening to this album (as well as Butch Vig's original mix known as the "Devonshire Mix"), I finally get the Beatles comparisons. For starters, you have to understand a bit about Beatles songwriting, which I didn't when I was a teenager. These are essentially pop songs. Kurt was an amazingly talented pop song writer. I read somewhere that his goal when writing a song was to make it as short and memorable/catchy as possible. Then I guess he just covered up his pop tracks by drowning his songs out in sonic chaos. Go back and listen to their first release Bleach (of which there's also a beautiful 20th anniversary edition on vinyl), and you'll hear Nirvana in its raw pop glory.
Read more
2 people found this helpful
Helpful
Report abuse

Erika
5.0 out of 5 stars Started my Obsession!
Reviewed in the United States on January 19, 2020
Verified Purchase
This CD set the stage for me to start listening to a bunch of nirvana songs. I had only known of the classics: smells like teen spirit, come as you are, lithium, and actually heart shaped box. But as I listened to this album, I fell in love with nirvana. So I started buying more cds. I have more cds of nirvana than I can fit in my car including Silver which I didn’t even know existed until I started seeking it out. I’ve become a huge nirvana fan and now when I listen to this CD it’s both nostalgic AND superficial to me! I actually like some other albums better now that I’ve listened to most of nirvana’s songs but come as you are will always hold a place with my heart along with all apologies, do re mi, sappy, aneurysm, about a girl, plateau, etc.
Read more
2 people found this helpful
Helpful
Report abuse

Guitarzan
5.0 out of 5 stars Even better, 20 years later
Reviewed in the United States on June 29, 2011
Verified Purchase
It's a sobering thought when you realize that this album is now 20 years old. I was a sophomore in high school when this came out and at the time, I wasn't that crazy about it. I liked "Smells Like Teen Spirit" and "Come As You Are", but that was about it. All I knew was that within a year, girls started wearing flannel shirts and combing their hair straight, and all of the guys quit trying to learn "Eruption" on their guitars and started bashing out distorted power chords. I didn't like Nirvana (or any of the "grunge" bands) very much when they first came out, but as time went on, I really began to understand just how important they were to rock music. They changed everything. Hair bands were never really that cool, and for the better part of 10 years, we were stuck with pointy guitars, Marshall stacks, and boys that dressed up like girls. Some of the music, like Guns 'n Roses, was very good, but most of it was over-the-top, cheesy and wasn't really anything any common person could relate to. When Kurt Cobain's distorted power chords first shot out of our speakers, we knew that something different was happening. Most of us didn't know what the lyrics were, and we didn't care. Rock music was taken out of the coke-infused culture of '80's Los Angeles, and put back in the hands of common people everywhere. No more spandex, no more Aqua Net, and no more two-handed tapping guitar solos on every video that MTV played. I help out with the youth group band at my church, and kids who weren't even born until after Kurt's death love Nirvana. Those are the riffs that they're always playing when I walk into the practice room. Nirvana is still cool, and rightfully so. Whether you love this album or hate it, it's importance, both musically and culturally, cannot be overstated.
Read more
31 people found this helpful
Helpful
Report abuse

Rocky Raccoon
5.0 out of 5 stars Alternative's Definitive Masterpiece
Reviewed in the United States on February 19, 2007
Verified Purchase
Listening to "Smells Like Teen Spirit," the starter to Nirvana's 'Nevermind' will always remind one why the album is such an alternative classic. Definitive for the fast-forward thrust of their guitars and the primal scream trajectory of Kurt Cobain's blistering vocals, they literally invented alternative as we know it. Nevertheless, even the most creative endeavors have their influences, and ingredients are mixed and matched for the newest alchemy. While one can cite John Lennon's 'Plastic Ono Band' as a vocal first and The Replacements as influences, their blend here is new and masterful. While "grunge" may be more of a fashion statement than a sound bite for the C.D., "garage band" is a more apt description of what they perfected for all. With a mix of punk and heavy metal, they jump start a whole new genre.

Besides the absolutely sublime primal angst of "Smells Like Teen Spirit," there's the propulsive "Breed," and the iconoclastic "Territorial Pissings". With a mocking intro that starts falsely with "Get Together," the latter song does more than separate the generations musically and lyrically. Then, there's the expert texture of more mid-tempo gems like "Lithium," the beautifully acoustical "Polly," and the throbbing and multi-layered "Drain You". "Lounge Act" keeps the energy going and drummer, David Grohl, whose gruelling efforts are remarkable all the way, really delivers on "Stay Away". The vocal tradeoff between Cobain and bassist, Chris Novoselic proves that you can do alternative and have great voices--that is tuneful and with great trajectory. If the variations of expert guitar patterns don't disappoint, then the variety certainly scotches any complaints of formula. "Something in the Way," which closes the album, forecasts a more "unplugged" future, even though the expertise of guitar work hardly needs elaboration.

After 'Nevermind' has played endlessly on the radio, it is easy to take their work for granted. I, for one, didn't even realize that all these songs were Nirvana's. Which goes to prove that their innovations would make music new again, and it would take some people a while to catch up--not just musicians, but even some listeners.
Read more
3 people found this helpful
Helpful
Report abuse
See all reviews

Izk07
4.0 out of 5 stars Great sound but WHY DID YOU COVER IT UP WITH STICKERS?!!?!
Reviewed in the United Kingdom on May 12, 2020
Verified Purchase
Amazing album. Well it's Nirvana isn't it so what do you expect? Great sound quality, and pleased to find the "secret song" was included. (Endless Nameless.) Everything was fine with the music, but some idiot decided to cover up Kurt's middle finger on the album sleeve with a sticker and another one covering up territorial p!savings. Quite disappointed about that. Tried to rip the sticker off the sleeve but it ripped the paper aswell. Territorial sticker came off easy. But the mark adds to the grunge experience, I guess.
Read more
2 people found this helpful
Report abuse

Shinyrock300
5.0 out of 5 stars Nevermind
Reviewed in the United Kingdom on November 16, 2016
Verified Purchase
Arguably one of the best Grunge albums in existence. Nirvana show how they can appeal to the mainstream while maintaining a very underground type presence. The album consists of many of the favourites such as Smells Like Teen Spirit, Come As You Are and In Bloom, but also has some great lesser known songs like Breed and Lounge Act. This album spans many fans of different genres - The occasional rock fan, the heavy metaller, the punk rocker and sometimes even the 80s fan. It's one of those albums that if you haven't listened to it, then why not? You're missing out!
Read more
3 people found this helpful
Report abuse

Reuben Burgess
5.0 out of 5 stars The best Grunge album ever released!
Reviewed in the United Kingdom on May 16, 2014
Verified Purchase
Its Nirvana. On September 24, 1991, Nirvana released what is in my opinion one of the, if not the best grunge album ever released. Every single track on this album could stand on its own and I would still pay the full asking price of the entire album, it's that good. What makes the album so good is both the phenomenal music but also the mastering on the album, this is definitely an album to get on CD as opposed to a compressed MP3 file! Every single song is great on this album and I highly recommend it to any self respecting rock or grunge fan!
Read more
4 people found this helpful
Report abuse

Pete
4.0 out of 5 stars It's good, it's not great
Reviewed in the United Kingdom on April 21, 2021
Verified Purchase
People throw out Nevermind so easily as the best album ever made, it's really not. It would fit in a top 100 perhaps but as a non grunge and passable rock fan, it is decent but never outstanding.
Read more
Report abuse

Lucy
5.0 out of 5 stars Buy this album!
Reviewed in the United Kingdom on January 8, 2015
Verified Purchase
I'm not going to pick apart the wonderment of this album, there are plenty of those type of reviews below which are worth reading but no need to repeat. For me personally, this album is very special. I simply love it. These are/were amazing musicians who are such important influences for music now and should never be forgotten. Unfortunately, I am too young to have ever had the privilege of seeing Nirvana perform live (I was only 4 when Kurt died), nevertheless I consider myself a major fan of this band and it's musical genius and I urge you all to spread the word! Buy this album.
Read more
One person found this helpful
Report abuse
See all reviews