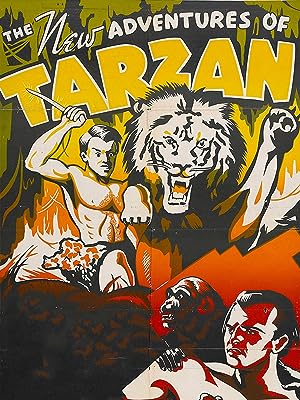 The New Adventures of Tarzan

(34)
5.558min1935NR
The Green Goddess is a totem worshiped by the primitive natives of a lost city deep in the jungle of Guatemala. It contains both a fortune in jewels and an ancient formula for a super-explosive which could threaten world safety.

Rich WannenReviewed in the United States on September 21, 2019
3.0 out of 5 stars
Cleaned-Up Picture, Yes. Restored Film, No.
Verified purchase
Perhaps a better-than-usual source print and remastering from it, and perhaps also some computer work, have given this serial's picture a brighter look and, to a lesser extent perhaps, its soundtrack more audibility with no "tape hiss", than is available elsewhere. However, it has nonetheless been sourced from a film version with the heavily-edited and re-dubbed 47-minute first episode instead of the original 62 minute one. That a film print of the complete first chapter must exist somewhere is known as I once actually saw it, used to source a Beta tape of the serial by, I believe, Nostalgia Home Video in the mid-80s. A true restored version of this interesting little serial remains to be made available. Caveat emptor.
3 people found this helpful

Patrick W. CrabtreeReviewed in the United States on June 22, 2008
5.0 out of 5 stars
A superb old, historic Tarzan serial
Verified purchase
I suspect that the title of this production, "The New Adventures of Tarzan," has been confusing to some folks since it was only "new" in 1935 when Edgar Rice Burroughs himself produced it!

What we have here is an old "cliffhanger" of twelve episodes which were originally shown at theaters, one week at a time, to run alongside main feature films. The idea was to keep you "hanging" so you'd come back the next week to see what happened -- someone was always about to be heinously knocked off at the end of each episode, (except for in the last one).

The story is this: Tarzan and his companions, headed by Major Martling, go head-to-head in the Guatemalan jungle against the nefarious P.B. Raglan in an effort to secure "The Green Goddess," a priceless ancient artifact which also contains the formula for a super-explosive. Of course, the Green Goddess is in the hands of first one and then another of the two factions and it becomes clear that only Tarzan can finalize its possession for the good guys. There is also a sub-plot of Tarzan going to the region for the priority purpose of rescuing his old friend, d'Arnot.

This film was actually shot on location, for the most part, in Guatemala where the action is supposed to have taken place so that is a big plus of this film. Herman Brix, a 1928 Olympic shot-putter, plays Tarzan but he later changed his name to Bruce Bennett and went on play roles in films like "Treasure of the Sierra Madre" (1948) and, "Sahara" (1943). His "Tarzan yell" sounds a great deal like Minnie Pearl's "How-deeee!!!" but, other than that, he makes for a pretty believable jungle hero.

The episodes of the serial are entitled:

This particular print has been digitally re-mastered and marketed by the Columbia River Film Group. Of course, the film is shot in black and white, full-screen, and runs for a total of FOUR HOURS! It's all on a single DVD and, having owned this serial issued by a couple of different distributors, this particular one is as good as it gets, a fairly clear print with decent sound. The film is in the public domain so it can be copied and sold by anyone and inferior copies abound.

This serial was later heavily edited to produce the film, "Tarzan and the Green Goddess" (1938), which only runs for a total of 90 minutes. The serial version is by far the superior choice of the two productions if you are really into the older black and white adventure films.

R. P. GlassReviewed in the United States on December 29, 2008
5.0 out of 5 stars
The Only Edgar Rice Burrroughs TARZAN Talkie
Verified purchase
I have read all of the Burroughs Tarzan books. As much as I've enjoyed the various film incarnations of the character from the '40's through the '60's, none of them were as close to the character as written as is Herman Brix in this serial. Brix was chosen by Tarzan's creator ERB himself. The film was produced under ERB, Inc auspices. As such, this 1935 serial closely conforms to the novels in structure: back and forth between competing expeditions at cross purposes, a lost city, death traps, coincidences, and a hurricane at sea.
I have sought out THE NEW ADVENTURES OF TARZAN for many years. I viewed it first as a 2 cassette VHS set. I graduated to the 2003 2-disk DVD from Best of Cliff Hanger Serials then to the 1-disk 2005 edition from Alpha Home Entertainment. Each time I was disappointed in the muddiness or flaring of the prints. When I saw that the Pop Flix Family edition was "Digitally Re-mastered/Sound Enhanced" for such a reasonable price, I could not resist buying yet another release of this serial classic. This is the best rendition of this film that I've seen to date.
CAVEAT: Although this print has been re-mastered, it is not fully restored. There are still scratches, less than a minute that repeats itself in Chapter 3, and some clipped sound towards the end. However this is the first print consistently viewable throughout so that one can actually focus on the story.
A ragged French aviator comes to Africa to find Tarzan. He was on a flight with Tarzan's great friend D'arnot in Guatemala when their plane goes down in a storm. The aviator parachutes only to watch D'arnot ride the plane down only to be captured by strange savages. The aviator goes into the jungle with George [a flunky comic relief - Lewis Sterling] in search of Tarzan.
The aviator is mauled by a lion which is then killed by Tarzan. The aviator dies in Tarzan's arms, but not before he tells Tarzan of D'arnot's plight.
Tarzan joins the Martling Expedition already headed for Guatemala in search of the lost city. Martling [Frank Baker] has a notebook containing both directions to the city and instructions on opening a goddess statue full of jewels and the formula for a great explosive [?]. Countering the Martling Expedition is Raglin [Don Castello], an adventurer in the pay of foreign powers, out to steal the goddess for his masters. Also against Raglin is the mysterious Ula Vale [Ula Holt] who eventually joins with Tarzan and Maitling. . [Ula Holt looks very much like a heroine from a J. Allen St. John illustration from the Tarzan novels especially when racing to save Tarzan from the alligators while he's dazed from falling over a huge waterfall.]
There are ambushes at sea both going to and leaving from Guatemala. There are death traps going to and escaping from the lost city. While trekking across Guatemala Raglin carries the heavy goddess. He can't open it without the book. He never has both the goddess and the book at the same time. Tarzan is thought dead several times. He battles multiple foes [up to hundreds in the lost city] with apparent ease. He never stops or considers his own life over others. He is equally at ease in town or on ship as he is in the jungle. This is true to the Tarzan on the page.
Considering the hardships of shooting with sound on location in the jungle, it is remarkable how well this serial matches the spirit of the novels.
MINOR GRIPES: The comic relief is a tat too feckless. N'kima is a chimp rather than a monkey [but the traditional cinema sidekick]. The queen of the lost city is the frumpiest I've ever seen. The young love interest [Martling's daughter & her fiancé] leaves as soon as they can since they have little to do other than to be put into peril. How did an African lion end up in a lost city in Guatemala? The last chapter ends too abruptly as if the serial were originally planned for 15 chapters and cut to 12 due to funding. But on the whole, THE NEW ADVENTURES OF TARZAN should please both devotees of the original novels as well as fans of b&w serials of the mid 20th century.
This version is from 2006. There is a 4-disk version from 2007 also offered from Amazon in the $20 rather than $6 range. There have been no reviews as to its content; but unless it is a pristine print with lots of bonus features, I would say that this 1-disk 2006 edition is the version for the curious to buy. As flawed as it may be, THE NEW ADVENTURES OF TARZAN is a must for the collection of any Edgar Rice Burroughs TARZAN aficionado.
13 people found this helpful

Fidel Molina FernandezReviewed in the United States on October 4, 2018
1.0 out of 5 stars
Flee this terrible edition
Verified purchase
Horrible editions! I attach the photos of the covers of the two editions to which I refer as there are several in the market.

PopFlix: Horrific edition, lacking the slightest definition in the image and with such a horrible sound that it is practically impossible to distinguish any dialogue. In the cover they say "Digitally re-mastered and sound enhanced", which is nothing but a hoax.

Unlabeled editor: I understand that not even the editorial brand dares to support this garbage. It is a DVD-R disc, not a printed disc, and it is only indicated on one side of the cover in a barely visible size. Logically, they do not even want to inform about it clearly. Very bad image and sound.

I advise you to flee from these editions as from the plague. The only acceptable edition I know of this serial is the Roan Group Entertainment edition (2004).
One person found this helpful

U. N. OwenReviewed in the United States on April 1, 2021
4.0 out of 5 stars
Odd Tarzan film.
Verified purchase
Quality a bit weak. Closer to the books. Interesting take on Tarzan out of Africa.

Dr James ManosReviewed in the United States on June 11, 2018
5.0 out of 5 stars
A movie that you will enjoy
Verified purchase
Amazing movie

Harold BillingsReviewed in the United States on August 19, 2017
4.0 out of 5 stars
Well done in classic style
Verified purchase
One of the old classics!

Ron WiseReviewed in the United States on February 1, 2004
1.0 out of 5 stars
Tarzan gets trashed
Verified purchase
This rare serial and important addition to the Tarzan canon is totally ruined by the awful treatment giving to it in this DVD set.
The picture quality is fair at best with most of it too dark or either too washed out. The sound is so bad that it's almost impossible to understand 90% of the dialogue through the loud sea of hiss.
Save your money, this is a total rip-off.
38 people found this helpful
See all reviews
Back to top
Get to Know Us
Make Money with Us
Amazon Payment Products
Let Us Help You
EnglishChoose a language for shopping. United StatesChoose a country/region for shopping.
© 1996-2021, Amazon.com, Inc. or its affiliates