You've subscribed to A New Beginnings Book! We will preorder your items within 24 hours of when they become available. When new books are released, we'll charge your default payment method for the lowest price available during the pre-order period.
Update your device or payment method, cancel individual pre-orders or your subscription at
Your Memberships & Subscriptions
There was an error. We were unable to process your subscription due to an error. Please refresh and try again. 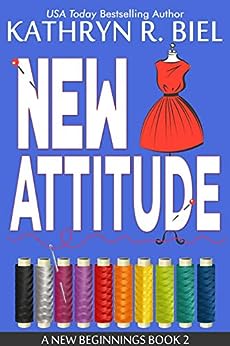 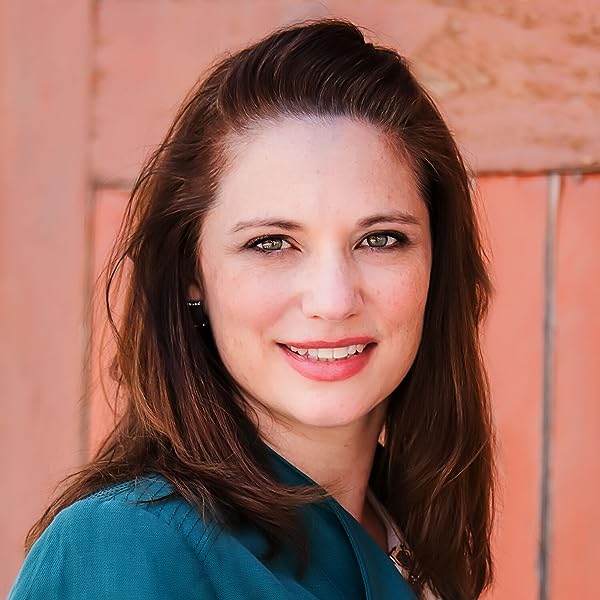 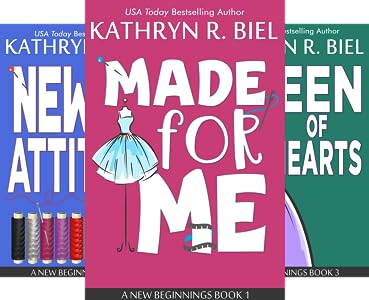 "Instantly likable, humorous and sometimes one-hundred percent painfully truthful, this is a great chick-lit story that really connects with the mind and heart!" --InD'Tale Magazine

RoloPoloBookBlog
4.0 out of 5 stars Kira has no idea which end is up and she had better figure it out soon because her daughter needs her ...
Reviewed in the United States on April 14, 2017
Verified Purchase
New Attitude by Kathryn Biel
Source: ARC from author and purchase
My Rating: 4/5 stars
My Review:

When it rains, it pours . . . . Kira left home six weeks ago to participate in the Made for Me sewing competition; she left behind her husband and her daughter and when she got home, only one of them was still there. Oh, and she didn’t win the competition either. Yeah, it’s pouring in Kira’s world right now.

With her house cleaned out and her deadbeat, soon-to-be-ex-husband dropping one bombshell after another, Kira has no idea which end is up and she had better figure it out soon because her daughter needs her to be a mom more than Kira needs to be depressed.

First up on the life after divorce agenda, getting a job. Though Kira has mad sewing and designing skills, her creativity isn’t quite what it was, so the craft store is it for the time being. Thankfully, the craft store is flexible and has people who aren’t just nice, but like minded in terms of their creativity. Kira quickly begins to make friends, and with friends, comes an interest in her private life. Kira doesn’t hide what’s happened to her, and her new friends quickly start in on finding her a new man. Dating, for the first time in 15 years, is not something Kira ever saw herself doing again, so she a whole lot like a duck out of water. Seriously, who knew “Netflix and chill” really meant sex to a guy???

Um, Tony knows and he isn’t at all pleased about Kira dating someone other than himself! Tony met Kira when she helped his cousin, Michele, win the Made for Me competition. Tony was interested instantly, but knew Kira was married and wasn’t going to cross the line. Kira, comfortable in her marital status, harmlessly flirted with the decade-younger hottie, know it would never go anywhere. That is, until she came home to find herself unmarried and clueless about dating. To Kira’s way of thinking, Tony is sexy and kind, good for but way too young and about 600 miles to far away to consider as a serious dating contender. Turns out, Tony isn’t nearly as skittish as Kira and he’s willing to put in the work to convince her of their rightness 😊

Over weeks and weeks of ups and downs and more ups and downs, Kira struggles to get her life on track. From every direction, someone has advice for her, and her head and heart can’t seem to get on the same page. But, there is always one defining moment in every romance read and wowsa, is Kira’s defining moment a bog one . . . . .

The Bottom Line: I am still very much liking this series and particularly enjoying the carrying over of characters from one story to the other. Though New Attitude is Kira and Tony’s story, Michele makes several very appropriate appearances that not only enhance the story, but further the overall plot for the series. Like book one, New Attitude is a good mix humor, drama, and mild naughty bits. All of the characters are full-bodied and interesting, the conversation between them is often witty and quick, and the plot is just flush enough with all the good stuff to keep it moving at a steady, yet not too fast pace. My only complaint about this read is the presence of some unanswered questions. Maybe it’s just me, but I certainly would have enjoyed knowing what happened to Kira’s ex, especially if it’s him getting what he deserves 😊 With that being said, I still found New Attitude to be a fine addition to the series!
Read more
2 people found this helpful
Helpful
Report abuse

Minnie
2.0 out of 5 stars Relationship not believable
Reviewed in the United States on May 7, 2021
Verified Purchase
I was Disappointed with this book. I enjoyed the first one quite a bit, but there was a lot of missing relationship development in the first one, or more specifically the relationship she did develop wasn’t the one that ended up being the love match. But the rest of the story was very good so I let it slide a bit.

Unfortunately this one added onto that theme. The relationship wasn’t developed at all, they were only together a few times and it was very superficial. It just wasn’t very believable and even though I liked the h, I didn’t understand what the H saw in her.

Then on top of that it ended very abruptly and there’s no resolution to many issues that are standing in the couples way. Including the fact that the H never said one word in the entire book to the h’s 5 yr old daughter.
Read more
Helpful
Report abuse

cadoug
5.0 out of 5 stars Loved this book
Reviewed in the United States on March 4, 2019
Verified Purchase
I had the divine pleasure of reading New Attitude by Kathryn R. Biel recently. This book fulfilled the “Book I Mean to Read Last Year” challenge for PopSugar. (Sorry, Kathryn.) I’ve read several of her books previously so I’m totally biased. My favorite of Kathryn’s books tie between Live for This and Made for Me. That said, I loved New Attitude.
The novel is the second in the series, A New Beginning. The story follows Kira’s journey after being on a reality TV show and oh, her husband left her while she was gone.
What I liked best about Kira is she’s an everyday woman. A real mom concerned with living her life right, keeping her weight down, and dealing with a troubling situation (total abandonment by her spouse—jerk). She’s a victim here, dealing with loss (the show) and loss (her ex-husband). All she wants to do is raise her daughter right and maybe just maybe have something for herself.
I loved watching her struggle. (Wait! That doesn’t sound right…) I felt for her in every step of her journey towards a new life. Finding that new attitude ain’t easy. And Kathryn Biel illustrates the journey from failure to success beautifully.
Read more
Helpful
Report abuse
See all reviews

Penguin
5.0 out of 5 stars Kira, she's not just the one with the hair!
Reviewed in the United Kingdom on September 30, 2017
Verified Purchase
You need to read book 1 first! So if you've done that you know Kira's the one with the hair ...and you probably know where this is going and how it's going to get there, and you're probably right, but that doesn't mean you shouldn't read it! To me Michele was a fun read but kind of annoying. Kira, it turns out, is not just the girl with the hair but a much more interesting and rounded character who we follow through a messy divorce, a massive loss of confidence and struggles to do right by her little girl, through, eventually, to a happy conclusion. We also see Michele through Kira's eyes, which is entertaining! They are very different characters but still good friends, and it's nice to see where Michele's life has taken her since book 1.
Read more
One person found this helpful
Report abuse

Angie Hackett (Stormageddon)
4.0 out of 5 stars Good read
Reviewed in the United Kingdom on February 24, 2018
Verified Purchase
This was a good read and well written. It was a decent follow up book, the characters were decent enough and largely relatable.

There were two things I didn’t like about this book, hence 4 stars. Firstly, I didn’t like that the author seems to consider a woman who is a size 10 in clothing is fat. Secondly, I felt that the author was wrong in making the assumption that kids who come from broken homes, especially girls, are messed up and have a hard time of things growing up. I had a single mum and I don’t feel any different to anyone who grew up in a two parent family. Maybe that says more about my upbringing than anything else.

LBxUK
5.0 out of 5 stars Love it couldn't put it down!
Reviewed in the United Kingdom on December 31, 2018
Verified Purchase
Loved this book a follow up to "Made for me" would definitely recommend to lovers of chick lit. Couldn't put it down! Read it at every opportunity 😊
Read more
Report abuse

Mrs P
5.0 out of 5 stars A quick and easy read with great ideas.
Reviewed in the United Kingdom on April 26, 2020
Verified Purchase
I found this book really helpful in refocusing my mind on what is important. Found it so useful 4 more colleagues went and got a copy.
Read more
Report abuse