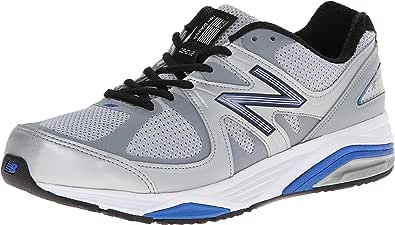 We encountered an unexpected issue.
OK

4.4 out of 5 stars
4.4 out of 5
1,362 customer ratings
How does Amazon calculate star ratings?
Amazon calculates a product’s star ratings based on a machine learned model instead of a raw data average. The model takes into account factors including the age of a rating, whether the ratings are from verified purchasers, and factors that establish reviewer trustworthiness.

Michael Jaynes
5.0 out of 5 stars Helped my heel pain
Reviewed in the United States on October 21, 2017
Size: 12Color: BlackVerified Purchase
Update 2/17/19: Well over a year later, I'm here to purchase my second pair. My heel pain had been down to zero for a long time, but it's beginning to return. I'm hoping it's because these are very worn out...as expected with a year and some odd months of daily use (walking, not running, see below). Actually I'm impressed they lasted this long (although most would have tossed them before now - I'm a cheap spender :) . Still wonder why they cost so much, but for the lack of pain worth every cent. To this day, they are the ONLY remedy I found for my plantar fasciitis and I have needed no other products or treatments. Crossing my fingers this new pair will do the same again

Original late 2017:
I`m not a runner, quite the opposite. While researching plantar fasciitis, I came across a recommendation for these. I was hesitant to spend this much, but desperate with pain (even after trying several other shoes, inserts, exercises, stretching, everything). I`m in no way advocating they will work for everyone, but they have been a godsend for me. I can't believe how much better my affected foot is, almost immediately. Just days later my heel pain is 1/10 from before. I`m no New Balance fanboy, but I do have a new appreciation for this model!

E. Allison
4.0 out of 5 stars The Best I've Found for Plantar Fasciitis and Gout
Reviewed in the United States on August 19, 2017
Verified Purchase
I have two pairs of these shoes; one white, one black. They seem to run about a half size large, but I have come to expect sizing issues from just about every shoe company because I have larger than average (U.S. size 16) feet. While these shoes won't help you win any fashion awards, they aren't bad looking. Personally, I think the black ones have a slight advantage in the looks department, as they lack the bright blue rubber inlay that the white pair sport.
As an elementary teacher, I spend about nine hours a day on my feet, and my entire school building is floored in decorative concrete. I suffer from gout and plantar fasciitis, and, as such, I have spent a lot of time and money trying to find the perfect shoe and/or insert to alleviate the pain of spending 40+ hours a week on what is literally a rock-hard surface. These shoes aren't perfect, but they are the best thing I have found so far. I still have near constant foot and knee pain, but it is bearable, and my feet don't swell nearly as much or as often as they did in any other shoe/insert combination I have tried. Additionally, I can take normal strides without having to put my feet down gingerly on the concrete floor.
Aside from the sizing issue I really have only two complaints about these shoes. The first is that the tongue is slightly too short, so that if you want to lace them all the way to the top you will have the shoelace slipping over the tongue and digging into your foot. I avoid the issue by lacing mine to the second-to-last eyelet. My second complaint is that, after about a year of daily use, the insoles in the black pair have started to dissolve (presumably from sweat). They are however replaceable, and the rest of the shoe still looks nearly new.
If you have gout in your feet, and especially if you have plantar fasciitis I recommend that you try these shoes. If you don't have foot problems, but you spend a lot of time on a hard surface, wearing these shoes might help you avoid painful foot issues somewhere down the line.
Read more
26 people found this helpful
Helpful
Comment Report abuse

Daniel
3.0 out of 5 stars Now a midlevel shoe
Reviewed in the United States on December 4, 2015
Size: 11 WideColor: Silver/BlueVerified Purchase
You can tell it is a much lower quality then the original 1540 as soon as you touch them.

They are still comfortable but are no longer worth the top dollar price in my opinion. Would be a great $80-$100 shoe.

Included are photos of my new 1540v2s after one week of wear and my old 1540s after six months of wear.

Also included is a side by side of both shoes. I do like the new tongue on the new shoes better but where there used to be leather training there is now plastic.

I do not expect these new shoes to hold up well. As you can see my shoes get HEAVILY used.

The last photo shows the new shoe already separating from the base after a week vs the old shoe after months of heavy use.
Read more

William B.
1.0 out of 5 stars Poor quality
Reviewed in the United States on February 17, 2018
Verified Purchase
I've worn New Balance for years, this is the first pair I've worn that fell apart after a couple months of wear. Leather coming off from the nylon and a hole in the back of the shoe. Will never buy these online again.
Read more

Ash Yanac
5.0 out of 5 stars Great shoes and that roll bar works!
Reviewed in the United States on September 26, 2016
Verified Purchase
I went to a New Balance Store to try these on before purchasing, so I knew what size and width I needed before ordering on Amazon.

They have a rollbar which has truly cut down on the amount of times my ankle rolls. I have "c-shaped feet" and have had surgery on my Ankle so my right ankle rolls often. However with the rollbar in these shoes I do not have the issue nearly as often (or at all).

I have worn these to work out and to work and they are very comfortable.

I wear 2E shoes and these fit perfectly. My ankle doesn't roll and they are comfortable.

Charles
5.0 out of 5 stars in very good shape. As a UPS driver
Reviewed in Canada on June 14, 2016
Verified Purchase
I am 55 years old, in very good shape. As a UPS driver, I walk a very fast pace.
These shoes changed my body. I did the Costco Dr. Scholls machine for Ultimate Performance.
My feet feel great. No more Overheated Feet.
Read more
4 people found this helpful
Helpful
Sending feedback...
Thank you for your feedback.
Sorry, we failed to record your vote. Please try again
Report abuse

Bernie Howitt
5.0 out of 5 stars The best shoes I own!
Reviewed in Australia on September 24, 2019
Size: 10 X-WideColor: Silver/BlueVerified Purchase
I always buy these shoes because they are the perfect shoe for my wide feet. Sturdy and comfortable, they are a strong construction that gives me the support I need. I wear them daily until they wear out, and then buy another pair. They are the perfect shoe for wide footed walkers like me.
Read more
Helpful
Sending feedback...
Thank you for your feedback.
Sorry, we failed to record your vote. Please try again
Report abuse