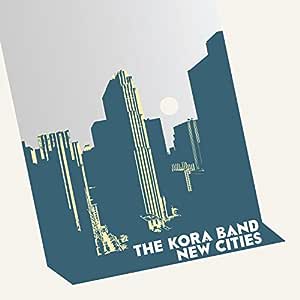 $13.99
& FREE Shipping on eligible orders. Details
Sold by: Amazon.com
Have one to sell?
Sell on Amazon

The Kora Band, an ensemble which integrates the uniquely entrancing timbre of the kora - a traditional 21-string harp from West Africa - into a jazz context, present their third release 'New Cities' and first for Whirlwind. The album showcases a suite composed by pianist and bandleader Andrew Oliver. The material explores the intersection between contemporary jazz and one of its main ancestors in West African Mandinka music, exploring the boundaries between these two musical cultures and honouring the jazz tradition of combining disparate musical elements into a vibrant and coherent whole. Each song takes an element from a traditional piece, deconstructs it, and uses the resulting material as the basis for a new composition. The original pieces range from common tunes such as "Kaira," made popular in the 1950's and "Mami Wata," originally a highlife guitar piece from Ghana which entered the Malian and Guinean repertoire in the post-colonial era, to obscure tunes such as "Fayinkunko," dedicated to a mostly forgotten Gambian patron. Personnel: Andrew Oliver (piano), Kane Mathis (kora, vocals), Chad McCullough (trumpet, flugelhorn), Brady Millard-Kish (double & electric bass), Mark DiFlorio (drums, calabash), Lee Elderton (clarinet - 3,6)