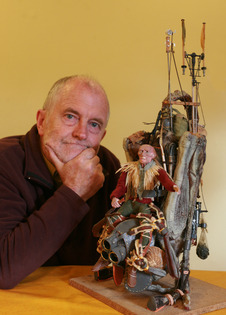 Suppose that the giant meteorite never reached the earth 65 million years ago, that dinosaurs continued to exist and followed predictable patterns of evolution. What would they be like today and where would they live? Dixon, author of After Man , offers some hypotheses as he takes us on a marvelous excursion into a fantasy that has the trappings of reality. He gives a perfectly straightforward account of theories about the Great Extinction, dinosaur evolution, habitat and distribution. Then, denying that the Great Extinction took place, he introduces us to his nearly credible creatures in each of the seven geographic realms. Dixon's illustrations are superb, and his imaginative descriptions of morphology, breeding behavior, feeding and nesting habits are so close to standard animal-encyclopedia style we have to remind ourselves that this is fantasy. The Gestalt (Formisaura delacasa) of the Palearctic Realm lives in a "thatched nest, usually around a sloping tree trunk over a stream." Other animals are the Gwanna and Dingum from the Australian desert, Footle and Treepounce from the Oriental rain forests. Each new dinosaur is a delightful addition to the world of imaginary animals. First serial to Smithsonian magazine; Literary Guild alternate; author tour.
Copyright 1988 Reed Business Information, Inc.

Many sf writers have created worlds where dinosaurs still walk the earth, but Dixon's new book pursues the premise in the most realistic way yet. In After Man: A Zoology of the Future (LJ 10/15/81), Dixon meticulously described a future earth biota 50 million years hence, but in this book he uses a world setting with today's climate and continental configurations, in which the mass extinction that closed the Mesozoic era has not occurred. Dinosaurs and the like have diversified consistent with zoogeographic and evolutionary principles and their own known fossilized morphology and diversity; mammals are small and secretive, and no humanoid has appeared. Intriguing to all. Margery C. Coombs, Univ. of Massachusetts, Amherst
Copyright 1988 Reed Business Information, Inc.