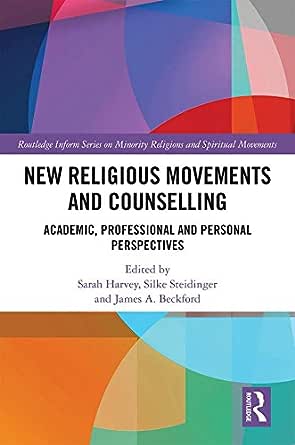 Flip to back Flip to front
Audible Sample Playing... Paused   You are listening to a sample of the Audible narration for this Kindle book.
Learn more
ISBN-13: 978-0367881573
ISBN-10: 0367881578
Why is ISBN important?
ISBN
This bar-code number lets you verify that you're getting exactly the right version or edition of a book. The 13-digit and 10-digit formats both work.

Sarah Harvey, Researcher at Inform since 2001, has an undergraduate degree from the University of Manchester in Comparative Religion and Social Anthropology and a Masters degree from the London School of Economics and Political Science in Social Research Methods (Sociology). She is studying for her PhD at the School of European Culture and Languages, University of Kent, UK, on the subject of ‘natural’ childbirth. She is co-editor, with Dr Suzanne Newcombe (2013) Prophecy in the New Millennium: When Prophecies Persist Aldershot: Ashgate, has guest-edited a special issue of The Pomegranate: The International Journal of Pagan Studies (volume 11, no. 1, 2009), and has written numerous other encyclopaedia entries and short articles.

has been an Assistant Research Officer at Inform since 2006. The primary focus of her work is researching religious groups for the Inform database and cataloguing the Inform library. In 2004, she received an MSc in Religion in Contemporary Society (Sociology) from the London School of Economics, the focus of her dissertation being on death in New Religious Movements. In 1999, she received a BA (Hons) in Religious Studies from King’s College London. She has been practising as a UKCP registered attachment-based psychoanalytic psychotherapist (qualified at The Bowlby Centre in 2014) and has worked at Tower Hamlets National Health Service Personality Disorders Service since 2014. Currently she is doing an MA in Information Experience Design at The Royal College of Art, UK.

, a Fellow of the British Academy, is Professor Emeritus of Sociology at the University of Warwick, UK, Vice-Chair of the Board of Governors of Inform and a former President of the Society for the Scientific Study of Religion. His main research interests are chaplaincies and relations between religion and the state. His publications include Cult Controversies (1985), Religion in Prison. Equal Rites in a Multi-Faith Society (1998, with Sophie Gilliat), Social Theory and Religion (2003), Muslims in Prison: Challenge and Change in Britain and France (2005, with D. Joly and F. Khosrokhavar), The SAGE Handbook of the Sociology of Religion (2007, edited with N.J. Demerath III) and Migration and Religion (2 edited volumes, 2015). --This text refers to the hardcover edition.