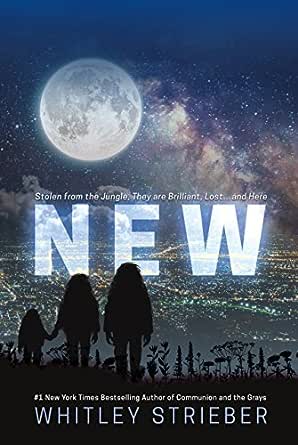 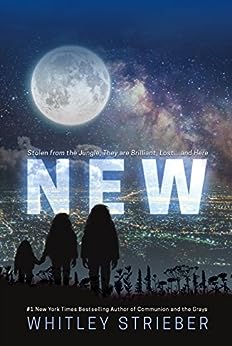 Starrymom
5.0 out of 5 stars A fascinating book I couldn't put down...
Reviewed in the United States on July 27, 2018
Verified Purchase
New by Whitley Strieber introduces us to the Tanda, a new species of humans found in a jungle and exploited by a large corporation. They are being taught to run an assembly line and will be treated as slaves. They won't breed, however, and they are needed to breed in order to reproduce more of them for sale.
Enter Beth, a primatologist hired to study the Tanda and get them to breed. Beth and her husband Charlie run a primate shelter, a shelter strapped for cash.
In order to keep the center running, Beth reluctantly takes the job, mainly for the money. She soon realized that the Tanda are unique and special...highly intelligent creatures who do not deserve their fate.
Once she tells her husband, Charlie hatches a plan...to break the Tanda out of the building they are being held in. (Breaking primates out of captivity is his specialty.)
Add several unsavory, unscrupulous villains who wish to exploit the Tanda for cash, and the rescue is on! Will it be a success, though?
New was a fast-paced exciting read. Meet Joe, Betty, Jack, Jill, Flutter and Crunch and travel with them as they are exploited and learn from their new surroundings.
This is a book that makes us look inside ourselves, and wonder who are the more civilized creatures here.
Read more
9 people found this helpful
Helpful
Comment Report abuse

Ray F
VINE VOICE
3.0 out of 5 stars Great idea for an SF story but falls short in execution.
Reviewed in the United States on September 11, 2018
Verified Purchase
New is Whitley Strieber’s novel that asks the question: what if the “hobbit” creatures (homo floresiensis) whose fossils were found in Sumatra, survived to this day? In Mr. Strieber’s imagination, six homo floresiensis (also called: Orang Kanda) infants are rescued when logging operations in Sumatra kill their parents. They are are taken by a corporation, Barrett Scientific, and raised by a Barrett employee, Dr. Greg Keller. The Kanda live in a section of the Barrett office building back in the US. They are found to be very intelligent, and able to perform complex assembly line tasks. Because they are not considered human, they can be owned by the corporation, used and sold as slaves. This neo-slavery is challenged when Barrett hires a primatologist, Beth Cooke, whose husband is an ex-soldier and veterinarian with a hobby of rescuing primates from laboratories. The thriller plot-line follows the Cooke’s rescue of the Kanda.

I liked the idea that the novel is based upon (the current existence of homo floresiensis) but I felt like the plot driving this idea was contrived, formulaic, and written to be a TV movie or series. Actually, it would probably make for a better TV drama than most TV science fiction, but in my opinion, it falls short of what the story idea could have achieved. The Kanda’s slave labor could have been used to criticize the wage slave system used by all corporations. The idea of “what constitutes humanity?” could have been explored more than it was. The intelligence and humanity of the Kanda could have been revealed more gradually for greater impact on the reader.

Now, I realize that my criticism of the New plot-line may be biased by my pessimistic view of the world. I think the discovery of surviving homo floresiensis beings would result in their seizure by the US government (abetted by corporations) and their existence classified along with UFOs and Directed Energy Weapons. They would be experimented upon and no anti-slavery law would save them. Mr. Strieber doesn’t go there. He has the Kanda’s suppression and suffering coming from a “bad corporation” with the government remaining impartial, and eventually coming to the Kanda’s aid via anti-slavery law. For me, this presents a framework of the rule-of-law that strains credulity.

For all those criticisms, I thought that Mr. Strieber renders the Kanda compellingly, and the scenes told from their point-of-view are well done. Their intelligence is limited by a dreadful living experience, but we cheer their development and their eventual run from imprisonment through the hazards of corporate guards, regular people, and the wider world that is beyond their experience. It should have been bigger in scope, however, and I thought the story’s resolution was too gratuitous.

Showing love as a higher virtue that the Kanda understand and desire is a good theme, and that’s the theme that works best in this novel. It is meant to be mirrored in the relationship of the human protags, but that doesn’t come off as well for me. The backgrounds of the human protagonists (Beth and Charlie) seem incompatible to each other, and Charlie’s background is a current stereotype of the “wounded warrior” who uses his military skills for good purposes (with no criticism of the Iraq war where Charlie served).

Overall, the storytelling in New is too light-weight. The escape scenes are unbelievable and should have been more Spielberg-like in intensity. The idea of a novel based on the discovery of living homo floresiensis beings (the so-called “hobbits”) is brilliant, and the scenes depicting them are brilliant. It’s just that this idea is developed within a mediocre thriller plot and it comes off weak. Mr. Strieber does try to say something about what defines humanity and about love as an advanced concept, but that’s all watered down by the cheap plot.

Now, I took much greater enjoyment from New than I did from Mr. Strieber’s novel (that was a SF Channel series), Alien Hunter. It’s not a bad read, it just could be so much better, and I know Mr. Strieber is capable of better storytelling (re: Majestic). Of his recent works, though, Mr. Strieber’s nonfiction has been much better than his fiction. For instance, I was greatly inspired by his book about the passing of his wife, Anne (re: The Afterlife Revolution).

I consider New to be a good book, an OK SF story, but one that doesn’t live up to its potential.
Read more
4 people found this helpful
Helpful
Comment Report abuse

harleychic
5.0 out of 5 stars A wonderful surprise...
Reviewed in the United States on March 28, 2020
Verified Purchase
O.M.G. Intense. NEW, by Whitley Strieber, was a good book when I first started reading it. Good enough to keep reading it. Then, BAM!!!!! It took off. I couldn't stop. The story called to me. I'd read in bed until I fell asleep and then if I awoke for some reason in the night, I'd read some more. I totally became antisocial reading this. I became immersed in the book's world. I laughed. I cried. Strieber threw 'feelings' at me until I was exhausted...wanting more. This is a standalone novel...a wonderful standalone novel.
Read more
One person found this helpful
Helpful
Comment Report abuse

Kindle Customer
5.0 out of 5 stars A wonderful story!
Reviewed in the United States on June 11, 2019
Verified Purchase
I have always admired this brave man with his fearless telling of his adventures into the unknown. Now I respect him even more with this wonderfully imagined tale of innocence and love. Way to go Whitley!! I believe that future generations will recognize him as one who helped us be led out of the dark. BTR... Driftwood, TX
Read more
3 people found this helpful
Helpful
Comment Report abuse

Kindle CustomerMerlady
5.0 out of 5 stars Fantastic book
Reviewed in the United States on November 23, 2019
Verified Purchase
I thoroughly enjoyed this book! It was very unique w aliens(kind of), animals(kind of), and a whole new look at our world through virgin eyes. I enjoy reading books that combine sci-fi and animals, especially when the animals are "talking" to us! This story shows us how a new humanoid would look at life in our society (U.S.) from a totally new yviewpoint, as virgin as physically possible. Unfortunately, humans have a great amount of fear of the unknown and that fear many times turns to violence. It's part of humanity, not one we're proud of but is there.
Read more
Helpful
Comment Report abuse

NJC
4.0 out of 5 stars Half and half
Reviewed in the United States on February 20, 2020
Verified Purchase
First half was terrific. One remembers how top-shelf a thriller writer Strieber can be. I was fascinated by the concept and riveted by the storytelling. The second half felt rushed and not fully baked, with the couple dozen typos illustrating this impression. Another run through with an editor seems needed.

Note: This is for Strieber's "New," not his similarly titled and also recent "A New World." Amazon seems to be conflating the two books.
Read more
Helpful
Comment Report abuse

Tompkinsassoc
5.0 out of 5 stars New
Reviewed in the United States on April 7, 2020
Verified Purchase
A wonderful story, I didn’t want to end.
One of the best I’ve read in a very long time. I laughed so hard at one scene I had in my head, and shed tears in others.
I highly recommend reading this book!
Read more
Helpful
Comment Report abuse

Jcsz
5.0 out of 5 stars Insightful
Reviewed in the United States on August 31, 2018
Verified Purchase
I think Strieber must be a very empathetic person because he is so capable at getting inside the minds and hearts of "creatures" that only exist on the page. This is what makes the reader become so invested in their welfare while seeing the world from their point of view. He did this also, very chillingly, in Wolfen. Definitely recommended!
Read more
Helpful
Comment Report abuse
See all reviews

Leanne Bazinet
5.0 out of 5 stars Great light read, simple yet extremely thought provoking
Reviewed in Canada on November 9, 2018
Verified Purchase
i especially like the Tandy.....so funny yet so realistic in their views of our world, a great thinker book, loved it.
Read more
Report abuse
See all reviews