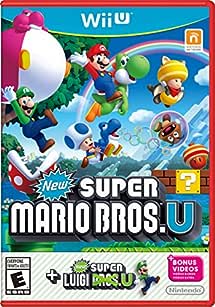 Buy this product as Renewed and save $27.09 off the current New price.

New Super Mario Bros. U + New Super Luigi U - Wii U $62.90
(13)
Works and looks like new and backed by the Amazon Renewed Guarantee

Get two huge games in one bundle with this pack, which includes both the New Super Mario Bros. U and New Super Luigi U games.

Up to five players* can jump into the fun, with up to four people using Wii Remote controllers and one on the Wii U GamePad. Using the GamePad, a player can create Boost Blocks out of thin air to help other players, or access hard-to-reach items.

Boost Mode also makes cooperative speed runs possible for the first time. Use the GamePad to interact with and manipulate enemies and objects in real time, and discover new ways to find the fastest route through each stage.

In addition to the main Story Mode, in which players must rescue Princess Peach, there are three more exciting game modes, including Boost Rush, Challenge Mode, and Coin Battle Mode.

In New Super Luigi U, you get to take control of Luigi in his first starring role in a platform adventure. Get ready to run, because your time limit is just 100 seconds for each course!

4.3 out of 5 stars
4.3 out of 5
555 customer ratings
How does Amazon calculate star ratings?
Amazon calculates a product’s star ratings based on a machine learned model instead of a raw data average. The model takes into account factors including the age of a rating, whether the ratings are from verified purchasers, and factors that establish reviewer trustworthiness.

MetalMichelle
5.0 out of 5 stars Fun for the whole family!
Reviewed in the United States on June 15, 2015
Verified Purchase
This is a game that my whole family enjoys playing together. My wife is not a gamer but she really likes this game (and Mario 3D World). My daughter is 5 years old and she enjoys this game immensely. This game is EXTREMELY similar to New Super Mario Bros WII but the style hasn't gotten old and worn out yet. The amazing level designs seem to keep things fresh. I wish they would make another expansion for this game. Super Luigi Bros U is really fun but it's time for more!
Read more
21 people found this helpful
Helpful
Comment Report abuse

Sherri
5.0 out of 5 stars Fun Game for the Whole Family!
Reviewed in the United States on May 30, 2017
Verified Purchase
Bought this used from third party seller "Ocean Reef Electronics" for $37.99. Game came in perfect condition as well as the case. I was impressed. Daughter and I played a few levels tonight. Love the squirrel suit. Didn't know if you play multi player mode you can't use the Wii U game pad, you have to use plain ol' Wii remotes or pro controllers. Gonna hit up Amazon and grab two extra Wii controllers so my wife and son can play as well with my daughter and I.
Read more
5 people found this helpful
Helpful
Comment Report abuse

Joanna Williams
5.0 out of 5 stars Kids love it!
Reviewed in the United States on October 22, 2016
Verified Purchase
This was a gift for my son's birthday. He loves to play this game on our Wii U. Him and his sister love to play this game together, and it helps them interact with each other. I personally love this game because it gives them bond time, and they both enjoy the game together.
Read more
8 people found this helpful
Helpful
Comment Report abuse

FamilyOf4
4.0 out of 5 stars It's a lot of fun. My 6 year old looooves it
Reviewed in the United States on March 15, 2016
Verified Purchase
We recently bought a Wii U and wanted a game that four people could play so we settled on this one. It's a lot of fun. My 6 year old looooves it. We would give it 5 stars but it seems to have a glitch where randomly it freezes up for just a second, or you hit the jump button and it doesn't work (all controllers do this so its not the controllers) which leaves your character just walking off the cliff to die instead of jumping to the next area as you intended. I can say this gets very frustrating. Other than that the game is fun for the whole family!
Read more
6 people found this helpful
Helpful
Comment Report abuse

Not form this seller
5.0 out of 5 stars Great for the entire family!
Reviewed in the United States on February 13, 2016
Verified Purchase
This game is so fun for the whole family. I have a 4 year old who loves the other Super Mario and since we play it all the time we surprised him with a new game. This entertained the whole family for hours and we can't wait to play it again.
Read more
6 people found this helpful
Helpful
Comment Report abuse

Mr. Fish
5.0 out of 5 stars Very nice, colorful fun game
Reviewed in the United States on February 18, 2016
Verified Purchase
Wow, this is a very cool Mario game. Its not hard to see why Nintendo has been around for so long...its because they make games like this. The world is huge and there are tons of different boards. The graphics are nice and slick--it looks like the graphics from an animated movie. Some of the boards are pretty tough so it might not be for younger kids, unless there is someone older around to help them out. I think someone younger, say, 5 or 6, could play it if they are playing with an adult or teen who is into video games. But, overall, a great game.
Read more
3 people found this helpful
Helpful
Comment Report abuse

anonymous87
1.0 out of 5 stars Didn't Work. Don’t buy used games !
Reviewed in the United States on March 25, 2020
Verified Purchase
Bought a "used acceptable" game disc. It didn't work. Was defective, I tried many times to reinsert the disc in different positions but it still didn't work. Returning for a refund.
Update:
I decided to buy the game again instead in “good” condition through Amazon. Unfortunately the game could once again not be read and I had to return it for a refund.

Benny Oblivion
5.0 out of 5 stars Platforming Perfection
Reviewed in Canada on February 7, 2019
Verified Purchase
I ended up buying this title a second time when ported to the Nintendo Switch, so when a game is good enough that you purchase it on more than one platform, I'd say you can't get a much more emphatic endorsement than that. Cute, colorful, smooth controls, full of hidden easter eggs to find, diverse levels, fun with any of the available controller configurations available on WiiU… Like platformers? Love Mario ( and Luigi, Toad, Toadette, and more...) ? If you just answered yes twice this is a must buy.
Read more

JRDN
5.0 out of 5 stars Great Game
Reviewed in Canada on December 2, 2016
Verified Purchase
I have been a fan of the New Super Mario Bros. games, and this does not disappoint! Highly recommend to any Nintendo Fan or Mario fan!

Amazon Customer
1.0 out of 5 stars Disk doesn’t work
Reviewed in Canada on November 5, 2019
Verified Purchase
Disk only worked twice before it quit working on us. Says the disk can’t be read. The kids seemed to like it so still thinking of replacing but to have a disk only work 2 times in a brand new gaming system should never happen
Read more
Helpful
Sending feedback...
Thank you for your feedback.
Sorry, we failed to record your vote. Please try again
Report abuse

Kevin
5.0 out of 5 stars Awesome.
Reviewed in Canada on May 14, 2019
Verified Purchase
Disk is in minty shape.
Works great, awesome game, shipped nice and fast, and in perfect shape.

Amazon Customer
1.0 out of 5 stars Eh
Reviewed in Canada on July 23, 2018
Verified Purchase
Too repetative, no need for this game unless you're collecting. Buy used. I sold mine for way under retail price. The levels aren't creative or different enough than previous renditions.
Read more
Helpful
Sending feedback...
Thank you for your feedback.
Sorry, we failed to record your vote. Please try again
Report abuse

Page 1 of 1 Start overPage 1 of 1
This shopping feature will continue to load items when the Enter key is pressed. In order to navigate out of this carousel please use your heading shortcut key to navigate to the next or previous heading.
Back
Next
Pages with related products. See and discover other items: first games, console game, consoles video games, game new, rocks for kids, beach game for kids