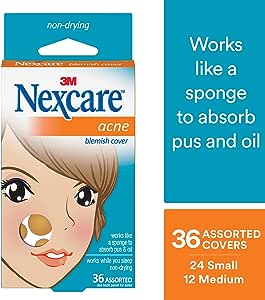 Say good-bye to blemishes with the help of Nexcare Acne Blemish Covers.

Safe to use on a variety of skin types, these non-medicated covers help absorb excess oil from the affected area. Simply peel a cover off the liner and apply to clean, dry skin. When the color changes from clear to white, you know it is working.

How to Use Nexcare Acne Blemish Covers

Can I use the acne covers with other medicated products?

No. Do not use 3M Nexcare Acne Blemish Covers with medicated products or treatments. If your acne becomes worse, consult a doctor.

Are the acne covers sterile?

3M Nexcare Acne Blemish Covers are sterile, unless the individual pouch is opened or damaged.

Do the Acne Blemish Covers come in different sizes?

Help blemishes clear with Nexcare Acne Blemish Covers. Safe to use on a variety of skin types, these non-medicated covers help absorb excess oil from the affected area. Simply peel a cover off the liner and apply to clean, dry skin. When the color changes from clear to white, you know it is working. Say good-bye to blemishes with the help of Nexcare Acne Blemish Covers.

mirasreviews
HALL OF FAMETOP 500 REVIEWERVINE VOICE
4.0 out of 5 stars Clears Infected Pores Without Pinching or Damaging Skin.
May 26, 2018
Size: 36 CountVerified Purchase
Nexcare Acne Absorbing Covers are little adhesive hydrocolloid patches coated on one side with some mixture of pectin, carboxy-methylcellulose, and polymers that absorb fluid. When placed over an open wound, they pull the fluid out, encasing it in a white gel. In the case of acne, the patches will pull the mixture of white cells, bacteria, dead skin, etc. that forms the white head of an infected pore. You have to wait until the pimple has come to the surface and you can see white. I know that some people don't do this, but I recommend pricking the white head with a pin or similar sharp object before applying the patch. I have experienced some patches that did not work because there were too many layers of skin over the infection, though it didn't appear that there were. If you prick the white head, the goop inside will definitely have an escape route.

I leave the patches on over night. If you see a white blob on the patch in the morning, remove it. If the pimple is completely flat and looks like it will heal, you're done. If you think there is still stuff to clear out of the pore, apply another patch. I wouldn't walk around wearing these patches. They are flesh-tinted (pale tint), but they are thick. You couldn't cover them with makeup. There are 36 in patches in a package, 12 large (13mm) and 24 small (8mm). Unfortunately, the adhesive is not strong, and the small patches don't stick well. I tend to knock them off, so I wish that there were more large patches. There is no medication on the patches, so they are non-drying and suitable for all skin types. Nexcare says that the patches "are not made with natural rubber latex." The package I ordered on 6 March 2018 was sold and shipped by Amazon and has an expiration date of 8 May 2022.

BMac
5.0 out of 5 stars May be magic
July 13, 2016
Size: 36 CountVerified Purchase
I don't know how these little guys work, but work they do. I had one blemish for so long that I assumed it and I would be cremated together when that time came. Two of these guys later, and not only was the blemish gone, the portal through which it came from the underworld into my life was miraculously not only closed but healed. I'm now working on my new identity without the devil's own blemish, which is a refreshing change from my usual daily partnership with that soulless eruption. Thank you, Nexcare.
Read more
1,127 people found this helpful
Helpful
Comment Report abuse

tattoofox
5.0 out of 5 stars Believe the hype
August 20, 2018
Size: 36 CountVerified Purchase
I finally bought this after reading rave reviews in an article and then here.

I bought it and stuck it in my cabinet and forgot all about it, until...

Until I woke up with one of those brewers. The kind that feel tender like a week before the finally become that monstrous, right by the mouth on the chin, you try to mess with it for days, but just pissed that thing off, kind of giant lump miles below the surface pimples.

The kind where you feel like your face is going to have a tire blow out.

And, naturally, it was just days before my daughter's open house where I had to meet her new teacher, my ex and all the parents that I have to see the rest of the year.

So I race up to the cabinet and slap on a big patch and press it on really well and waited, replacing it around bedtime and morning.

Oh my gawd. Legit, 2-3 patches and it was a memory. It's like it never was. It went from some horrific, thunder on the horizon, omen of aesthetic death, tremors 5 harbinger of zit, to just flat, normal skin. NOTHING THERE.

quakermoment
5.0 out of 5 stars My dermatologist has some splainin' to do.
November 3, 2017
Size: 36 CountVerified Purchase
I'd had this box tucked away for months. Forgot about them. A few days ago, I felt that tell-tale pain of a knot under my cheek which was going to be a cystic acne spot. You know the kind. Takes forever to ripen and even then is not always productive and satisfying to pop, and then has the audacity to get all red and angry and leave a scar. Can't put make up on the damn things either!
THIS time, I vowed not to squeeze it until it reached obvious ripeness. I washed and dried. Then, put one of these mysterious patches on the knot. Left on all night and into the next day. Removed and washed my face. Not expecting anything, I pressed gently with my fingers - not even my nails, and white liquid flew out easily. Then I stopped so as not to over do it (you know who you are!), washed, dried, and put on another patch overnight. Next day - it's gone. No knot. No open sore. No anything.
What I want to know, is why in the hell hasn't my dermatologist told me about these?! I've been on accutane twice since the age of 40. Highly recommend. Game changer. Also, helps keep me from picking at pimples in my sleep. 😳😁
Read more
132 people found this helpful
Helpful
Comment Report abuse
There are 4,222 customer reviews and 5,564 customer ratings.
See all 4,222 customer reviews
Write a customer review

Page 1 of 1 Start overPage 1 of 1
This shopping feature will continue to load items when the Enter key is pressed. In order to navigate out of this carousel please use your heading shortcut key to navigate to the next or previous heading.
Back
Next
Pages with related products. See and discover other items: face acne, cleansing for oily skin, oily skin care, makeup oil, oils to help you sleep, cleansing oil for dry skin