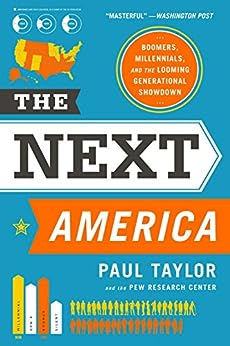 The Next America: Boomers, Millennials, and the Looming Generational Showdown Kindle Edition

Paul Taylor is a Senior Fellow at the Pew Research Center. He previously served as its executive vice president, where he oversaw demographic, social, and generational research. He is the author of See How They Run and coauthor of The Old News Versus the New News. He is a former reporter with the Washington Post, where he covered presidential politics and served as a foreign correspondent. He and his wife live in Bethesda, Maryland. --This text refers to the paperback edition.

4.2 out of 5 stars
4.2 out of 5
151 global ratings
How are ratings calculated?
To calculate the overall star rating and percentage breakdown by star, we don’t use a simple average. Instead, our system considers things like how recent a review is and if the reviewer bought the item on Amazon. It also analyzes reviews to verify trustworthiness.
Top reviews

Armando Fox
5.0 out of 5 stars Essential and well-reported information, wherever you are on the political or generational spectrum
Reviewed in the United States on August 13, 2016
Verified Purchase
To paraphrase a famous scientist, the nice thing about data is that it doesn't matter whether you believe it or not. This book contains a tremendous amount of (summarized) data about the current and future demographics of the United States, gathered from both public sources (eg statistics published by the Bureau of the Census, the IRS, and other Federal agencies) and from one of the world's best-known nonpartisan survey-based research foundations.

I'd summarize the biggest takeaways as follows:

- The combination of immigration, intermarriage, and changing social morés among younger generations (the author identifies today's primary generational groups from oldest to youngest as Silent, Boomers, GenX, and Millennials) mean that the social attitudes of current and future voters lean overwhelmingly towards what most people would associate with "progressive values" or with the Democratic Party. In particular, as the Republican Party has tacked farther and farther to the right, the segment of the electorate receptive to their messages is shrinking and in fact dying. On the other hand, these younger-but-growing segments of the electorate have a much poorer voter-turnout record than their older and more conservative counterparts. This combination of elements has profound consequences for future elections.

- The biggest coming "showdown" (to which the subtitle alludes) is the aging of the world's population. Japan, China, and some European nations will get there ahead of the US, in part because although birth rates are falling everywhere throughout the developed world, in the US that effect is partially offset by immigration, especially economically (since most immigrants arrive ready to work rather than newborn). But all these countries are rapidly approaching a point where fewer and fewer working people are supporting more and more seniors. (In Japan the ratio will approach 1:1 by about 2040 if current trends continue.) There is an unfortunate positive feedback loop in countries like the US where most legislation is made democratically: the older generations constitute a large and growing voter bloc to whom politicians must cater, and that bloc has been using its influence to appropriate a growing share of government wealth redistribution. In the US, Social Security and Medicare are basically on the ropes. At some level most of us know this, but the statistics and trends presented to quantify the situation are stark.

In other words: not only will the older and younger generations find themselves at odds on how to redistribute wealth, but their positions will be even farther apart because their social contexts are so different. As the author states in the introduction, "either transformation by itself would be the dominant demographic story of its era."

The book does a nice job of including enough charts and graphs inline when necessary to illustrate or back up a point, but relegating vastly more charts and tables to an Appendix you can browse at leisure or for more detail.

There is also a fascinating and well written appendix describing in high level terms the survey methodologies used by Pew and other professional research organizations, for those who think surveys are just a matter of asking some questions and tabulating answers. The appendix covers random sampling; a lay-person explanation of sampling error and reweighting; various biases including recency, confirmation, and self-selection; running meta-surveys to test the effect of different phrasings or presentations of the same questions; and much more. Indeed, this appendix is useful reading for anyone involved in doing rigorous surveys, whether they are interested in the rest of the book's content or not.

Whether it cheers you up, depresses you, or just causes you to raise an eyebrow may depend on where you fall on the political spectrum, but regardless of where you do, this is essential and well-reported information.
Read more
15 people found this helpful
Helpful
Report abuse

PJ M.
4.0 out of 5 stars Not A Real Cheerer-Upper
Reviewed in the United States on April 26, 2015
Verified Purchase
I wouldn't say this is the kind of book you buy for the story narrative.

As a research item, it is loaded with valuable information. It paints a picture some may be missing, but I think we all see the writing on the wall whether we want to or not.

Bob Speer
5.0 out of 5 stars Well Written and Thought Provoking
Reviewed in the United States on November 6, 2017
Verified Purchase
It is a very interesting read. The author shares significant insight about where we have been and where we are headed. He shares his understanding of the consequences of economic choices made in the past and what must be done to sustain the economy.
Read more
2 people found this helpful
Helpful
Report abuse

John A. Stayn
4.0 out of 5 stars Informed at a dazed level
Reviewed in the United States on May 23, 2014
Verified Purchase
I am partway into this book, but I can already tell how full of relevant information it is. Unfortunately, the presentation format of the writing is somewhat repetitive, so my eyes start to glaze over at the stats and text. Perhaps this book is meant to be absorbed in small quantities, like a good box of chocolates. However, don't let my impressions take away from the importance of the information, especially as it relates to electoral predictions and changes in cultural norms.
Read more
2 people found this helpful
Helpful
Report abuse

Happy Sociologist
5.0 out of 5 stars Fascinating reading
Reviewed in the United States on June 11, 2014
Verified Purchase
Anyone who is trying to understand generational differences and the Millennial generation needs to read this book. I teach in a small college, and it is really helped me understand my students. In fact, I will be using it in class in the fall. It is well-written, easy to read, and has many useful and surprising demographic and social facts. It is the best I have read on this topic.
Read more
3 people found this helpful
Helpful
Report abuse

Amazon Customer
4.0 out of 5 stars Insightful and well-supported analysis
Reviewed in the United States on July 28, 2015
Verified Purchase
This is a thoughtful analysis of political trends by the Pew research folks, identifying the political biases of succeeding generations of Americans and extrapolating from that information some insightful predictions of the future. I thought the presentation was well-reasoned and documented and that it provides a likely picture of the near future.
Read more
One person found this helpful
Helpful
Report abuse

shufti
5.0 out of 5 stars If you feel this isn't the same country you grew ...
Reviewed in the United Kingdom on October 9, 2016
Verified Purchase
If you feel this isn't the same country you grew up in. You need to read this book. It is all about identifiable generational cohorts; boomers, millenials etc. The most convincing explanation of social change I have seen - in much of the western developed world people are divided by their attitudes to immigration - this book explains why this has become such a big deal. Fundamentally it is natural human resistance to social & cultural change. And, if Taylor is right, the change is going to increase over the next 10 years. The more you understand something the more you can plan for it and accept it.
Read more
Report abuse

Nambu
5.0 out of 5 stars What will America and Americans look like in another two decades?
Reviewed in Japan on February 27, 2018
Verified Purchase
This excellent well-supported interpretation of where Americans will be and what they will be doing in the years to come deserves serious attention. The survey material is excellent, and the overview shows what the country will look like in the decades to come. Definitely a buy.
Read more
Report abuse
Translate review to English
See all reviews