You've subscribed to The Exit Series! We will preorder your items within 24 hours of when they become available. When new books are released, we'll charge your default payment method for the lowest price available during the pre-order period.
Update your device or payment method, cancel individual pre-orders or your subscription at
Your Memberships & Subscriptions
There was an error. We were unable to process your subscription due to an error. Please refresh and try again. 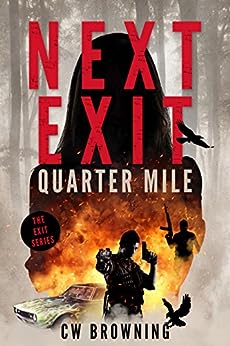 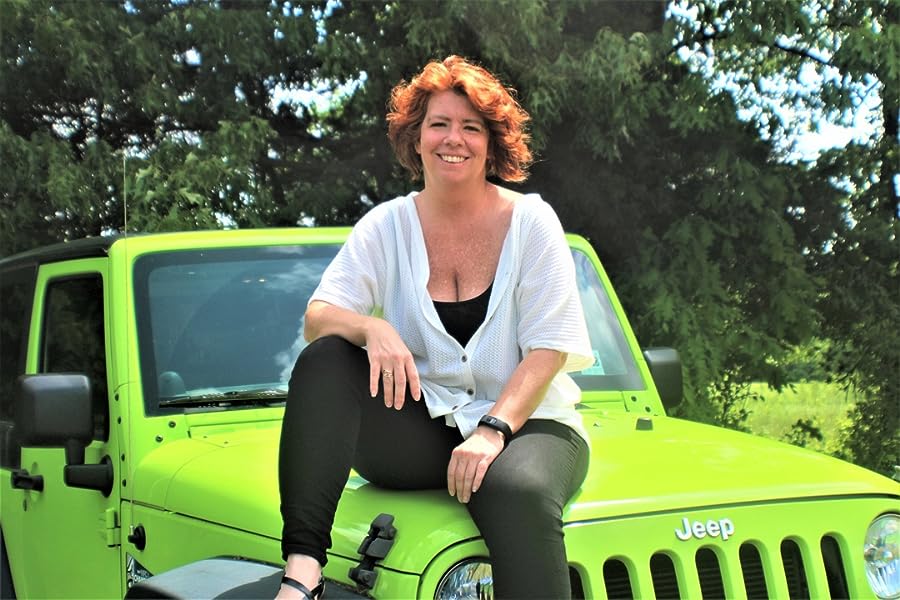 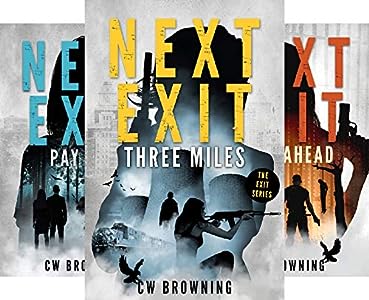 CW Browning was writing before she could spell. Making up stories with her childhood best friend in the backyard in Olathe, Kansas, imagination ran wild from the very beginning. At the age of eight, she printed out her first full-length novel on a dot-matrix printer. All eighteen chapters of it. Through the years, the writing took a backseat to the mechanics of life. Those mechanics, however, have a great way of underlining what genuinely lifts a spirit and makes the soul sing. After attending Rutgers University and studying History, her love for writing was rekindled. It became apparent where her heart truly lay. Picking up an old manuscript, she dusted it off and went back to what made her whole. CW still makes up stories in her backyard, but now she crafts them for her readers to enjoy. She makes her home in Southern New Jersey, where she loves to grill steak and sip red wine on the patio. --This text refers to the paperback edition.

4.6 out of 5 stars
4.6 out of 5
101 global ratings
How are ratings calculated?
To calculate the overall star rating and percentage breakdown by star, we don’t use a simple average. Instead, our system considers things like how recent a review is and if the reviewer bought the item on Amazon. It also analyzes reviews to verify trustworthiness.
Top reviews

D A Bale
4.0 out of 5 stars Death's Bill Comes Due
Reviewed in the United States on June 24, 2018
Verified Purchase
Next Exit, Quarter Mile is the latest offering in the Exit Series – and things are about to change in ways Alina never saw coming.

Viper is told to stand down and returns to New Jersey after being unexpectedly chased across the Middle East to the Amalfi Coast, a strange concept when the assassin is usually the one doing the hunting. The Organization has a mole that is leaking like a sieve and death lurks just around the corner.

And when the bill comes due, death always collects.

Alina knows this better than most, having lost her brother to enemy fire twelve years ago, prompting her to join the Navy and Naval Intelligence which eventually led her to the Organization. But the past is sneaking up, ready to explode like the handiwork of the terrorist’s bomb signature she knows all too well.

And he’s coming for more than just Viper this time.

Quarter Mile is part Fast and Furious, part Taken, and part Jason Bourne, and for a gal that loves cars and things that go ‘splodey, this was a really nice mix. But it isn’t all street races in this offering. We are talking about assassins – and even assassins have a human side.

That’s where this novel becomes a pivoting point in the series. Circumstances from all sides force Alina (and that mysterious Hawk) to explore the humanity that was buried long ago in order to become the weapon of mass destruction her government needed. But now that that government might be targeting her, she must reexamine the reasons for what she does – and what it has required her to give up.

And in this, Quarter Mile takes a darker turn – and you’ve gotta know how much I like the darkness. The stakes are high once again and the heat gets turned up on much more than the relationship that has simmered between Viper and Hawk. There is at times a level of gruesome we haven’t seen before in the prior novels that rivals the torture scene in Taken – and I’m talking the one that didn’t make the cut in the final theatrical release version. Viper goes deep, and for an assassin that means dark.

Since we’re dealing with so much introspection, the pace at times moves a bit slower than your typical thriller, but there’s so much meat to process in this novel that it’s appreciated. Things are set up here that promise an explosive next book – and yes, that means that not all loose threads are tied up in this one when it comes to the overall larger story. But that’s okay in my book. I like the anticipation of the upcoming possibilities.

As with previous books in this series, there are a few incidences of head-hopping with point-of-view, though it’s much better this time around. Overuse of eye narrowing, lip twitching, and the word slightly ran rampant at times. However, these didn’t decrease my overall enjoyment of the novel – especially after that killer ending.

But you’ll have to read it to discover what that is.

Another solid outing of the Exit Series, to which I’ll again offer up four stars. I received a complimentary copy of this book for review purposes – but I liked it so much I went ahead and purchased it for my library.
Read more
Helpful
Report abuse

I got book 1 Next Exit, Three Miles (Exit #1)
as a freebie on amazon.com and from the first chapter I was hooked.
This is a new to me author and I like the writing style and the genre.
There is secrecy, action, intrigue, suspense, a bit of romantic/sexual tension, conspiracy, CIA, Dept of Homeland Security, FBI, Secret Service , and the main character is an assassin for the Government, what more could you ask for?
After finishing book 1, I bought Book 2, 3 and 4 and went on a reading binge, I have not been disappointed.
All 4 books can be read as stand- alone books as there is enough information given to follow the story, but I feel that you get more enjoyment out of these books if you read them in order.
Settle yourself in a comfortable chair and enjoy the twists and turns. A great read.
Book 4 finished with a bang and I look forward to Book 5.
Read more
Helpful
Report abuse

dennis barron
5.0 out of 5 stars Next Exit, Quarter Mile. CW Browning
Reviewed in the United States on February 17, 2021
Verified Purchase
Alina's past has apparently caught up with her. People, not friends apparently know about her past performances. As an assassin. She returns home, stateside , New Jersey with orders to keep a low profile. A Mexican Cartel is running merchandise utilizing very experienced street racers to move there product. A terrorist attack at multiple locations on Palm Sunday. Non stop intrigue, action. Another excellent read in this series!!
Read more
Helpful
Report abuse

Spy Guys And Gals
5.0 out of 5 stars Another Terrific Time Spent In New Jersey
Reviewed in the United States on November 26, 2018
Verified Purchase
Okay, that headline might be a bit hard to take but the book is most definitely NOT hard on the eyes or the brain. It is, as usual in the Exit Series, a really fun, fast, and pleasant trip. I enjoy the daylights out of Viper and Hawk and their friends and colleagues and was pleased as punch to find, after having finished the 3rd book, that this one was ready. My only regret is that it will now be a while before the next one comes out. When it does, I'll read it, too, cause this is a fun series.
Read more
Helpful
Report abuse

Amazon Customer
3.0 out of 5 stars Still a good read but...
Reviewed in the United States on September 24, 2019
Verified Purchase
I guess it would be difficult to continue with the excellent first two books in the series. This one is good but maybe they weren't written to be read one after the other. I am definitely buying the next one. Well, actually I already have. If you haven't read them, do yourself a favor and read them!
Read more
Helpful
Report abuse

lily
4.0 out of 5 stars Wow!!
Reviewed in the United States on October 3, 2019
Verified Purchase
This series just gets better and better. I really appreciate that these are full sized stand alone books and not some cheesy sequel. You Get your money's worth with these books. A lot of twists, turns, and surprises here. Also, lost one of the main characters. No spoilers here.
Read more
Helpful
Report abuse

Amazon Customer
5.0 out of 5 stars Finale but Left Door Open
Reviewed in the United States on December 10, 2018
Verified Purchase
As in previous books in serirs story moves fast with interesting lines. Script is believable laced with humorous dialog between characters. Hate to see series end but door appears to be left open for additional books with same characters due to the unexpected twist in the ending. Looking for that next book to come along if in fact it does.
Read more
Helpful
Report abuse

Bill
5.0 out of 5 stars Heartpounding
Reviewed in the United States on June 28, 2020
Verified Purchase
I just finished the fourth book in the Exit series, been reading non-stop all week, all four books. Can't wait to start the next one.
Absolutely outstanding series. Non-stop action and intrigue. Great stories and great characters.
This is one series that is a must read.
Read more
Helpful
Report abuse
See all reviews

Roger Rhodes
5.0 out of 5 stars Great books
Reviewed in the United Kingdom on March 8, 2019
Verified Purchase
Just finished number four, enjoyed it very much. Just got time to start the next one before lights out. 👍
Read more
Report abuse

BA Muir
4.0 out of 5 stars Fast Paced Read
Reviewed in Canada on October 13, 2020
Verified Purchase
#4 in the series which should be read in order. A fast paced thriller with lots of twists and turns. Unfortunately to get the end of book 4 you must purchase book 5. Sneaky!
Read more
Report abuse

Samantha Hiscock
5.0 out of 5 stars What a cliffhanger!!
Reviewed in Canada on November 30, 2018
Verified Purchase
How am I supposed to wait for the next instalment? These books have me HOOKED! I can’t wait to read the next one.
Read more
Report abuse

Jo-Anne Landriault
5.0 out of 5 stars The name for book 5 in the series
Reviewed in Canada on June 4, 2020
Verified Purchase
Did not like the ending was forced to buy book 5 it is great reading
Read more
Report abuse
See all reviews