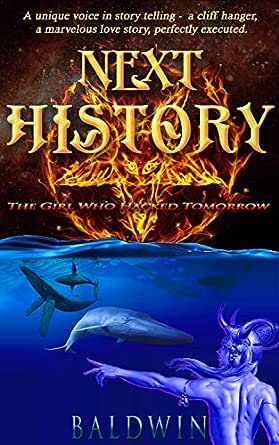 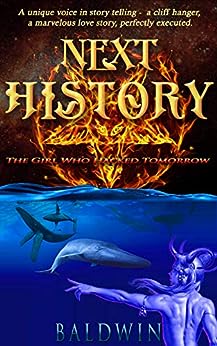 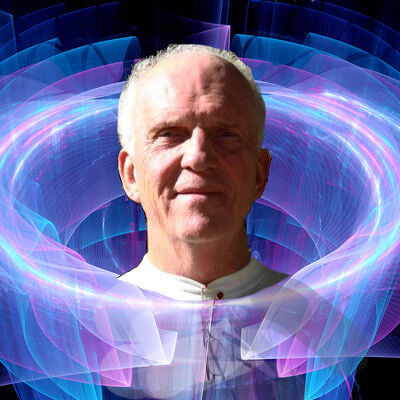 Next History: The Girl Who Hacked Tomorrow Kindle Edition

5 stars - Really worth reading. If you can imagine reading Neal Stephenson - before anyone much had heard of him and mix it with Good Omens - this might be that novel.

4 stars - Science and magic, legend and myth. Very well written story; I had a hard time putting it down. What a greatread! Tharcia, reads out a spell that ultimately changes the world. Iwould definitely recommend it. A fantastic novel! ~ p c

4 stars - Hope... The reading of this book reinforced beliefs I have held for some time.  Thank you for hope. I loved the book... I recommend it. ~ Dragonviolet­­­­­

5 stars - What a Find! Absolutely AWESOME book! I was looking for escape fiction, and while the bookprovided that, it is so much more. It made me think, and it is changingmy life. If you want to know the deepest secrets of the universe, thisbook won't spoon feed you, but will give you lots of terrific hints.Look over there! Consider this! What would you choose? And last, best,what will I choose? Now I need to find another book by Lee Baldwin! ~ Maggie Uh-O

5 stars - A being in a state of gratitude connects to all that is good. Empowering story of esoteric knowledge blended withcryptology, whalesong and supreme beings. Couldn't put the book down. ~ dj-1984

What If an adventure novel slid over the boundary into dystopian romance with contemporary fantasy themes? Where carnal desires battle human spirituality, there you will find the next history of humankind.

What if we found a completely accurate history of our beginnings, an unbiased record that was not passed down verbally, not reimagined in every telling?

I looked at creation myths of many cultures, located the first feminine archetype, and found scholarly writings that I used as an energy source for every writer's favorite question: What If?

I am a novelist in Ashland, Oregon. I have waited 25 years to be able to say that, through a half-dozen careers including my own creative copywriting agency in Vancouver (Canada) and Hawaii, operating an advertising business in Honolulu, and 17 years as a human interface designer in Silicon Valley. It was worth it.

My characters often have a quirky edge, because in contemporary fantasy romance I see human individuality and personal foibles as the launch points of dramatic conflict. Working in epic science fiction and fantasy I strive to achieve dialog and narrative as a mental landscape, with rhythms of dramatic reveal, turning points, and cadences.

Science fiction romance generally satisfies the reader's hunger for vicarious experiences. You know, the cool stuff. Such as glamorous adventure, epic situations, sex and romance, and generally overcoming obstacles that must be impossible yet seem plausible. I beleive that dystopian books for teens must blend humor and terror in a subtle dance.

Some of my work, Next History in particular, I wrote so that people would gain hope, in a way, or at least think about some things in a new light. Anytime someone gains something from my books, that fulfils my purpose.

Baldwin-Books.Com has the full skinny on my titles. Perseverance furthers!
Read more

4.1 out of 5 stars
4.1 out of 5
44 global ratings
How are ratings calculated?
To calculate the overall star rating and percentage breakdown by star, we don’t use a simple average. Instead, our system considers things like how recent a review is and if the reviewer bought the item on Amazon. It also analyzes reviews to verify trustworthiness.
Top reviews

Old Eagles fan
5.0 out of 5 stars Great fantasy with cosmic twists galore!
Reviewed in the United States on June 8, 2015
Verified Purchase
The author let his creative license take flight in this book and I enjoyed it immensely. The plot takes previously normal (sort of ) characters and inserts them into the ultimate cosmic intrigue. I would love a sequel but can't imagine what it might be. What do you think, Mr. Baldwin? Maybe a P-51` ride to heaven?
Read more
One person found this helpful
Helpful
Comment Report abuse

JRPCPA
2.0 out of 5 stars A Confusing Novel with a Title that Fails to Describe Its Purpose
Reviewed in the United States on July 25, 2015
Verified Purchase
Obviously Mr. Baldwin has done an extraordinary amount of research from philosophy and religion, to various aspects of science in developing his plots (and I use the plural intentionally here) for Next History, however this is one of the weaknesses I found in this book. He simply tried to include too many different concepts and too many different stories. Consequently, I found the novel to be a tangled, confusing, meandering, inconsistent, repetitive collection of jumbled thoughts with little coherent purpose as if the author were simply reciting his nightly dreams. Furthermore, characters were inadequately developed impelling the reader to care little about their eventual outcome, which in some cases was very ambiguous.

As it relates to the novel's structure, I found Mr. Baldwin's writing very accomplished, but inconsistent. For example, I disliked his technique of changing writing styles during chapter transitions. One chapter would demonstrate a grammatically skilled writing structure with proper sentence and paragraph format, and another chapter improperly used a style of incomplete sentence structure (i.e. phrases) probably to illustrate random thoughts or experiences. Some chapters inconsistently combined, most likely intentionally, past and present tense, and the author's attempt to render artistic prose, in many cases, simply caused confusion about what was really occurring. In addition, images would abruptly appear in the narrative of the novel for no apparent reason, as if the writer simply determined something weird would be nice to include at this point (i.e. a snake in a tree suddenly appeared). Finally, I didn’t appreciate the writer’s technique of obfuscation (i.e. confusing language) in writing some text messages, acronyms, and phrases that the normal reader would be unable to interpret. Was the purpose to illustrate the author’s intelligence, or to simply mock the reader?

Finally, I hoped this novel would offer a more positive and technological vision of the future rather than ultimately submerging itself into the same metaphysical dreamland offered up by many other "science fiction" writers of today. Personally, I feel that many of the philosophies Mr. Baldwin shared in this novel were ridiculous nonsense, but if they had been expressed more plainly and convincingly, I may have taken them more seriously. Rather, I feel that the author simply wasted his time and mine.

LiverTransplant1
5.0 out of 5 stars fun read
Reviewed in the United States on May 29, 2014
Verified Purchase
I enjoyed reading this very much. It had me engrossed for a long time and stayed up quite late in order to finish.
Read more
One person found this helpful
Helpful
Comment Report abuse

dj-1984
5.0 out of 5 stars A being in a state of gratitude connects to all that is good.
Reviewed in the United States on September 11, 2013
Verified Purchase
Really makes you sit back and reflect on your own life. Empowering story of esoteric knowledge blended with cryptology, whalesong and supreme beings. Couldn't put the book down.

I always thought the Akashic Record was in the Van Allen Belts, but that's not my only notion that was changed by the essence of the story. Intuitively, I understand and believe many of the ideas in the book - we are part of everything around us, we are cared for by a higher intelligence - and because (we find out) our fate is not sealed, we can "achieve all the things you ask" for.

Kindle Customer
4.0 out of 5 stars Combines science and magic, legend and myth
Reviewed in the United States on September 11, 2013
Verified Purchase
Very well written story; I had a hard time putting it down. I started it this morning before work and now it's after midnight. What a great read!
How to describe this book? There are way too many layers! It is set in current times for the most part, at the Pentagon and other US locations. The heroine, Tharcia, reads out a spell that ultimately changes the world. I don't want to say anything more, except that I would definitely recommend it.

Results: A fantastic novel! And it was a freebie. Read it.

John W. Baughn Jr.
4.0 out of 5 stars A fun read!
Reviewed in the United States on February 24, 2014
Verified Purchase
Was a fun read. I liked the build up and interactions among the characters. The characters seemed reasonable and well thought out. Things were a little chaotic though with some characters having different names or being referenced by a different title in different scenes. I found myself rereading some pieces to get all the implications. This is definitely a book you might reread later and pick out some new things.
Read more
One person found this helpful
Helpful
Comment Report abuse

Anthony Patterson MD
1.0 out of 5 stars Fantasy, not sci-fi
Reviewed in the United States on April 28, 2014
Verified Purchase
The marketing blurbs about the book suggest that it is a doesn't-fit-in-any-genre work, which may be true of the first few pages, but it rapidly falls into the fantasy category. You might also put it into the "Polemic" or "Sermonizing" categories were they to exist. The book gets preachy maybe half-way through. While the sermon is about some inoffensive, trendy, eastern religion, new age kind of stuff, it is all very derivative and stale. And unoriginal. Nothing new here. Certainly not the speculative anthropology I look for in Sci-Fi.
Read more
One person found this helpful
Helpful
Comment Report abuse
See all reviews

Kindle Customer
5.0 out of 5 stars Real or fiction?
Reviewed in the United Kingdom on November 22, 2013
Verified Purchase
It took me a while to get into this book but when I relaxed and let it flow, the pages flew by as I was entrapped in what felt like sci-fi movie woven with a reality not many experience. 'This is already available' said Lian, and so it is in one form or another. I've recommended it to a few friends already and look forward to some more from the author.
Read more
Report abuse

Amazon Customer
5.0 out of 5 stars Fantastic read !
Reviewed in the United Kingdom on September 24, 2013
Verified Purchase
I'm not often disappointed by the books I download, but equally I'm not often blown away by them.
Next History: The Girl Who Hacked Tomorrow *did* blow me away.A superb piece of work IMHO.Well-paced, thought-provoking and hard to put down.The characters are well drawn and believable, the plot rivetting.I enjoyed the style of writing and am now looking for other books by the author.
Apologies if the review isn't wordy enough....just download the book and enjoy it.

claudia d
4.0 out of 5 stars Nice story
Reviewed in Germany on May 31, 2013
Verified Purchase
I found the story to be very original. The writing style is also OK. However, I would recommend this book for 'fantasy' rather than 'science-fiction' lovers.
Read more
One person found this helpful
Report abuse