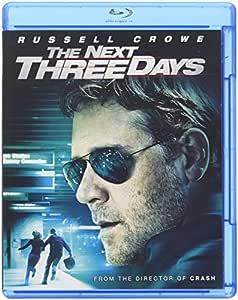 The Next Three Days [Blu-ray]

Life seems perfect for John Brennan until his wife, Lara, is arrested for a murder she says she didn’t commit. Three years into her sentence, John is struggling to hold his family together, raising their son and teaching at college while he pursues every means available to prove her innocence. With the rejection of their final appeal, Lara becomes suicidal and John decides there is only one possible, bearable solution: to break his wife out of prison. Refusing to be deterred by impossible odds or his own inexperience, John devises an elaborate escape plot and plunges into a dangerous and unfamiliar world, ultimately risking everything for the woman he loves. Lionsgate presents a Hwy 61 Films / Lionsgate production. The Next Three Days stars Russell Crowe, Elizabeth Banks, Brian Dennehy, Olivia Wilde and Liam Neeson, and is directed by Paul Haggis from a screenplay by Paul Haggis. The Next Three Days is produced by Michael Nozik and Paul Haggis, and Olivier Delbosc and Marc Missonnier.

4.6 out of 5 stars
4.6 out of 5
705 global ratings
How are ratings calculated?
To calculate the overall star rating and percentage breakdown by star, we don’t use a simple average. Instead, our system considers things like how recent a review is and if the reviewer bought the item on Amazon. It also analyzes reviews to verify trustworthiness.
Top reviews

F. J. Gonzales
4.0 out of 5 stars Don't underestimate Russell Crowe in a Prius!
Reviewed in the United States on October 8, 2017
Verified Purchase
Russell Crowe plays "John Brennan," whose wife, "Lara" (Elizabeth Banks), gets arrested for murder, but with so much evidence against her, only John believes she's innocent. But is she? After 3 years at a temporary holding facility in urban Pittsburgh (and their young son growing up barely knowing his mama), she's then given a notice that she'll be moved to a full-scale prison in only 3 days, hence the film's title. As an upstanding teacher in the city, John hardly has the mind of a fugitive, but a seemingly shut-and-close case against his wife forces him to become a fast-learner, if he's going to successfully break his wife out, no matter the sacrifices. Former Best Actor Oscar winner Crowe ("Gladiator), using a convincing Yankee accent while initially showing a softer/family man side, proves without a doubt that he's a Hollywood heavyweight, with Banks also holding her own (even without makeup in most scenes). Moreover, there's Liam Neeson, Daniel Stern, Jonathan Tucker, and Kevin Corrigan in cameos, along with Jason Beghe (TV's "Chicago PD"), Brian Dennehy, and Olivia Wilde (who sure reminds me of Banks). My only mini-complaints are it being maybe 15-20 mins too long and an odd choice of background vocal music. The end product, however, is a calculated, invigorating, thrilling, and satisfying movie experience, with shades of Quentin Tarantino's "True Romance."
Read more
7 people found this helpful
Helpful
Comment Report abuse

Casan
5.0 out of 5 stars Lots Of Scenes
Reviewed in the United States on August 12, 2020
Verified Purchase
A woman (Crow's wife) goes to prison because the evidence makes her guilty of killing her friend. Russel Crow decides to get her out of prison, even though his wife is amazed at his determination. The acting, of course, is good, and the script an adaptation of a French movie. In watching the commentary, the director tells us there were lots of scenes -- prison scenes, escape scenes etc etc. Good movie!
Read more
One person found this helpful
Helpful
Comment Report abuse

BillyBulb
5.0 out of 5 stars Excellent movie
Reviewed in the United States on June 4, 2017
Verified Purchase
Superb acting, this movie will have you holding your breath, as the drama has many twists that determining the outcome becomes totally unpredictable. Russell Crowe and Elizabeth Banks were outstanding as husband and wife in this thriller of crime and love. A must see movie!
(Not sure why they have Liam Neeson headlined, though his role is important, he has little more than a cameo appearance).

Suzy Ditte
5.0 out of 5 stars Great FAST Paced Movie!
Reviewed in the United States on April 1, 2017
Verified Purchase
Love this movie! Really fast paced. It's clever and very suspenseful. It will have you on the edge of your seat! Russell Crowe is SO awesome in this as is Elizabeth Banks and Liam Neeson is great too! There are others surrounding casts members who do a really good job that you'll recognize. i strongly recommend this film. Never a dull moment.
Read more
5 people found this helpful
Helpful
Comment Report abuse

David H. Hanneman
4.0 out of 5 stars Makes you wonder what you would do
Reviewed in the United States on October 18, 2013
Verified Purchase
... if your loved one was imprisoned for what you thought was a crime they didn't commit. I don't want to spoil the ending, but basically the movie starts out with a weird little dinner party, and the next day the police bust down the front door and arrest a man's wife for murder. They try the appeals process, and she reveals some more information, and he decides to break her out of prison. The couple has a son, which makes the movie even more poignant.

You will want to watch this movie at least once - they don't show the women's actual trial, but it does make you wonder how many innocent people get sent to prison based on circumstantial evidence or the lack of a good defense attorney.

Ingrid
5.0 out of 5 stars One of my favorite movies
Reviewed in the United States on April 16, 2012
Verified Purchase
The Next Three Days is a movie full of suspense. It really kept me on the edge of my seat and that doesn't happen very often.
Russell Crowe is absolutely brilliant as John Brennan the main character. The rest of the cast is also well chosen and their acting is great. The different characters are nicely developed, convincing and plausible. The dialogs are well written.
There are many touching scenes where no words are spoken. It's just the acting and some background music which tell you more than any words could say. The soundtrack is also very well chosen. Layout and scenery of Pittsburgh play an essential part in the story line.
The plot is very densely packed and fast-moving and consists of many small scenes. Some of the deleted scenes would have filled some gaps and provided the viewer with some helpful explanations. It's a pity that there is no extended version on the DVD. There are for example deleted scenes that would have explained how John Brennan came up with the plan to tamper with his wife's blood test to get her out of prison.
The Next Three Days is definitely one of the best movies I have seen lately but nothing is perfect. You just can't push up the door knob of a car with a tennis ball. There would have been some other means like a device to intercept the door lock mechanism with remote control. John could have obtained such a device from the same shady neighborhood he got the passports from. I also didn't like the scene of Lara trying to throw herself out of the car just because John made a sudden change in plans. Why a second suicide attempt now when she is almost home free? A freaked out Lara pushing at her husband while driving could have just as easily caused the near accident.
Anyway, I think the whole story is quite believable even though there are some very convenient coincidences. Just watch Reality TV and you will see even more unbelievable stories.

Amazon Customer
5.0 out of 5 stars One awesome thriller. !!!!!
Reviewed in the United States on August 28, 2020
Verified Purchase
Its been a long time, since I've seen a movie, that had me this caught up in it, I felt like I was living it myself. I don't want to give anything away, but, I wanted a certain thing to happen so badly, this is just one of the greatest movies, I have ever seen, and I watch alot of movies. If someone gave this movie a bad review, they don't know a great movie, when they see one. I am just now calming down, that's how caught up, I was in this movie.
Read more
Helpful
Comment Report abuse

Sandra L. Thornton
5.0 out of 5 stars Amazing movie for anyone who likes a lot of action and adventure.
Reviewed in the United States on March 21, 2014
Verified Purchase
Russell Crowe was master mind in getting his wife out of prison and was going to leave child at birthday party because they were running late and he figured road blocks would be up. His wife would not accept this idea and tried to throw herself out of car and he was holding her by hand as she was half out of car with 18 wheeler witnessing ordeal. Trucker stopped ahead of them and got out of truck and got back on road as Crowe assured him all was okay. Crowe got beat up many times while getting false passport, ID and social security cards. The wild car drives were miraculous and adrenalin was pumping through my body.
Read more
One person found this helpful
Helpful
Comment Report abuse
See all reviews

P. Rae
5.0 out of 5 stars Don;t miss out on this one
Reviewed in Canada on October 29, 2020
Verified Purchase
Keeps you on the edge of your seat the whole way through. Loved it!
Read more
Report abuse

Brenda Devins
5.0 out of 5 stars AWESOME MOVIE!!
Reviewed in Canada on January 2, 2014
Verified Purchase
What an awesome movie!!!! I have wanted to see this movie since the first time I saw it advertised. It was well worth the wait!!
Read more
2 people found this helpful
Report abuse
See all reviews