Nigel G. Mitchell was born in Brooklyn, New York. He earned a Bachelor's in English at Arizona State University in 1999. He's a writer for the popular sci-fi blog, The Geek Twins, where his work has been featured regularly in CBR, Blastr, io9, and Screenrant. His short stories have been published in Lost Worlds, 365 Tomorrows, and Black Hole Magazine.
Read more 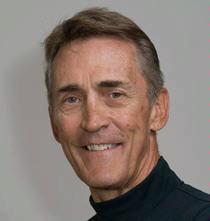 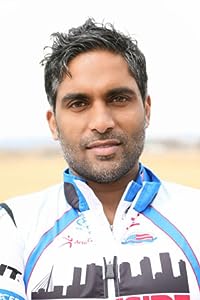 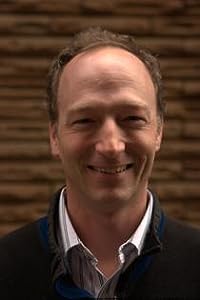 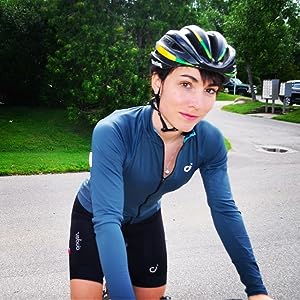 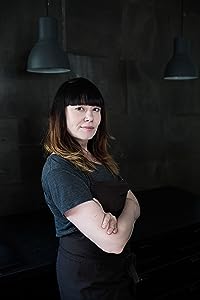 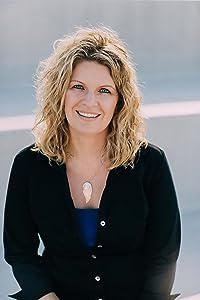 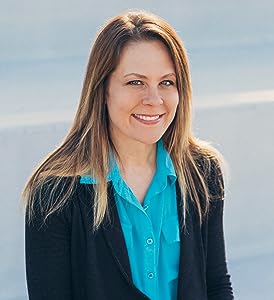 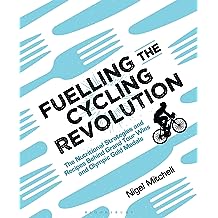 Fuelling the Cycling Revolution: The Nutritional Strategies and Recipes Behind Grand Tour Wins and Olympic Gold Medals Jun 15, 2017
by Nigel Mitchell
( 43 )
$9.99
The must-read practical guide to what to eat (on and off the bike) for any cyclist looking for a training or performance advantage

If you're looking for success on the bike what you eat is at the core of all your training. You are what you eat - and if you're on the bike for long periods and expecting results then your diet is crucial. Get it wrong and you can feel sluggish and below par – but eat right and all the training and preparation will be worth it.

Nigel Mitchell, head of nutrition at Cannondale–Drapac, is at the pinnacle of delivering cutting edge nutrition, and has demonstrated this at the elite level of cycling.

Now Nigel lifts the lid on his nutritional secrets and the knowledge and experience gained from working with the top professional to help you get the most from your diet to fuel your cycling and gain a performance advantage.

This accessible and practical toolkit features crucial rules to follow and 24 nutritional recipes for breakfast, main meals and snacks. This is a no-nonsense and non-faddy approach to a subject that's often shrouded in mystery and pseudo-science. Pro rider anecdotes and race case studies feature throughout to help you identify your own requirements.
Read more
Other Formats: Paperback , Digital 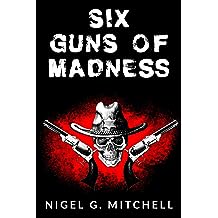 Dylan Blaine and his gunfighters have seen a lot on their journey through the Old West, but they face a new danger. The town of Blackwood is terrorized by the Darke Boys, a gang armed with bizarre and exotic weapons. They want an Aztec scroll guarded by an eccentric inventor, the key to awakening an ancient evil. Blaine must take up conventional and steam-powered weapons to stop a nightmare from rising out of the desert.

It's Western. It's steampunk. It's Lovecraftian horror. It's a pulse pounding adventure unlike anything you've read before. Download SIX GUNS OF MADNESS

"Six Guns of Madness is everything the title implies: gunfighters against Lovecraftian horrors" - Dan Schwent 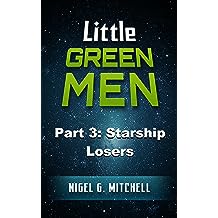 Little Green Men #3: Starship Losers Jun 24, 2018
by Nigel G. Mitchell
( 1 )
$0.99
Once, Jeffrey Foster was just a cashier at a convenience store until an alien warlord invaded Earth. He helped to fight them off but they returned, and this time they mean business.

The alien Xenon Empire has sent a fleet of battleships to destroy Jeffrey Foster and the planet Earth, but Jeffrey is trapped in a rickety spaceship more likely to kill him than the Empire. The military training facility trying to teach him to become a hero has been destroyed. His ship's crew is fighting a duel to the death. Other than that, Jeffrey's goal of trying to save Earth from destruction is going great.

This is it, the final part of "Little Green Men!" Fans of Douglas Adams, Terry Pratchett, "Red Dwarf," and other comedy science fiction will love this series. 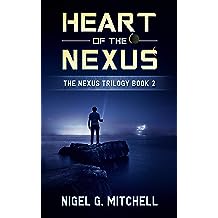 Heart of the Nexus: The Nexus Trilogy Book 2 Jun 1, 2018
by Nigel G. Mitchell
( 1 )
$2.99
Four people have been taken from Earth to the interplanetary maze known as Nexus where they've survived their first journey to a dangerous world, but the trip home is far from over. It isn't long before they discover the brutal alien Kraghs have returned, and they don't plan to leave them empty-handed. When one of the four is threatened, the other three must fight to save them but they discover the Kraghs have a plan that could threaten the Universe.
Read more 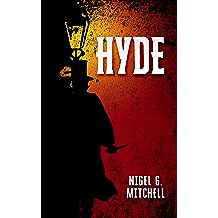 In the spirit of "Maleficent" and "Wicked," get ready to see one of fiction's greatest villains in a whole new way with HYDE.

You may think you know the story of Jekyll and Hyde, but what if Hyde wasn't the monster? That's the question faced by Henry Jekyll's lawyer Utterson when a mysterious woman gives him a manuscript in the dead of night. In the pages, Utterson finds a new account of the story from the perspective of Edward Hyde. Trapped in the body of Henry Jekyll and hated by all men, Hyde struggles to build his own life independent of his creator. He finds himself drawn into sin and corruption, abused and pushed to violence while exploring the cruelty and hypocrisy of society at large. Prepare for a chilling and thrilling story, not about good and evil but the shades of gray that lie in between them. Get your copy now
Read more 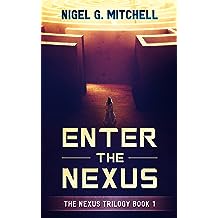 Enter the Nexus: The Nexus Trilogy Book 1 Sep 19, 2017
by Nigel G. Mitchell
( 1 )
$2.99
A shy librarian, a tough cop, an arrogant businessman, and a geeky teen girl are transported from Earth to an alien world where they find fierce monsters and terrifying aliens. They soon discover they are the victims of a bizarre experiment and the only way home is to make their way through an interplanetary maze that crosses countless worlds across the Galaxy. They'll have to work together to settle their differences, uncover the secrets, and survive the dangers of the Nexus.
Read more 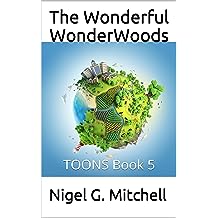 The Wonderful WonderWoods: TOONS Book 5 Jun 29, 2017
by Nigel G. Mitchell
$0.99
The epic conclusion to the hilarious series is here!

In a world where cartoons are real, and every genre has its own country, Crafty Wolf and his companions have finally reached their goal: the WonderWoods. In the fairytale land, they will have to get into the Apex Corporation to stop the ruthless CEO who plans to enslave their world. But first, they'll have to get through a dangerous forest, face a sociopathic fairy godmother, and an army of giant robots. It's a zany and side-splitting adventure for all ages, especially fans of "Shrek," Disney movies, and Terry Pratchett. Download your copy now!
Read more 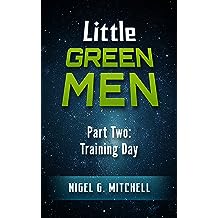 Jeffrey Foster wants to save Earth from the alien armada heading right for it, but first he'll need to go through training at the Planetary Savior School. It won't be easy. If the training doesn't kill him, the alien food will. Meanwhile, the Empire of Xenon is scouring the Galaxy to hunt him down. Will Jeffrey graduate as a full Planetary Savior? Will the Empire get to Earth first? Will Jeffrey be able to keep from strangling his annoying squadmates?

"Little Green Men" is a three-part series of 20,000 words each, and is the second in the "Flying Saucers" trilogy. Fans of Douglas Adams, Monty Python, and "Red Dwarf" will enjoy this new series. Download it today!
Read more 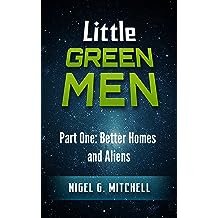 Jeffrey Foster thought saving Earth from an alien invasion would be the high point of his life. Now he just wants to find a nice place in the Galaxy to settle down. But he's unaware that the Xenon Empire plans to send its deadliest warlord to destroy the Earth. Will Jeffrey turn his back on his home world to enjoy a quiet life? Or will he interrupt his favorite HoloVision show to save the day? And can he ever find some alien food to eat that won't make him gag?

"Little Green Men" is a three-part series of 20,000 words each, and is the second in the "Flying Saucers" trilogy. Fans of Douglas Adams, Monty Python, and "Red Dwarf" will enjoy this new series.

Check out the other books in the series!

Other comedies by Nigel G. Mitchell: 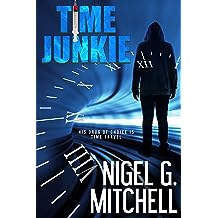 Timothy was just a frustrated teenager until he stumbled across krono, a new drug which sent him back in time while he tripped out. From the moment he first tries it, Timothy begins a downward spiral into crime and corruption, all while living through the moments that led to his addiction. Explore his funny and emotional journey as Tim explores his past while trying to grapple with the present and determine his future. Fans of Kurt Vonnegut will enjoy this mind-bending novel. Download it today!
Read more
Other Formats: Paperback 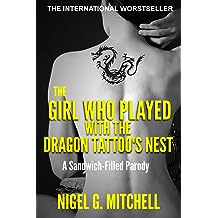 The Girl Who Played With The Dragon Tattoo's Nest Mar 23, 2015
by Nigel G. Mitchell
( 8 )
$1.99
Harried Avenger, niece of one of Sweden's wealthiest families, disappeared over forty years ago. At the same time, a string of women have been found dead inside gigantic sandwiches. Many years and sandwiches later, her aged and slightly insane uncle continues to seek the truth. He hires Marty Stu Bonkvist, a bed-hopping journalist who totally isn't an idealized version of the author, to investigate. Aided by his sociopathic hacker sidekick Elzbeth Salamander, he taps into a vein of sandwiches, Apple computers, and unbelievable plot twists. 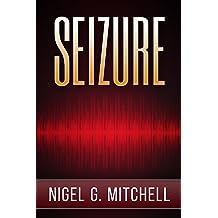 When Kent Reynolds' closest friend dies of a fatal seizure, he thinks it's just another tragedy in his life, like the death of his wife years earlier. But as more people die the same way, he uncovers a horrifying conspiracy. Someone has found a way to make computers trigger lethal seizures in anyone who uses them. And it's spreading around the world. Kent must race to find the truth behind the murders and stop them before the Internet becomes a weapon to wipe out Mankind.

Fans of Michael Crichton will appreciate this techno-thriller