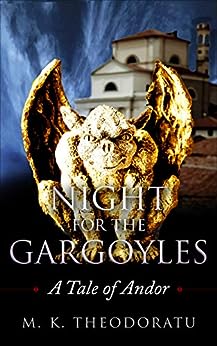 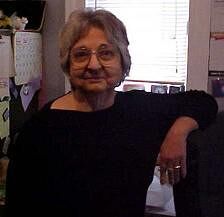 Night for the Gargoyles is the inspiration of my Andor books. For some reason, I wrote a short story, and then, was surprised when it sold to Spectra, a British fantasy ezine.

Hi. I don't do very much social media, but you can reach me at myFacebook writer's account if you want to comment or ask me a question: facebook.com/M-K-Theodoratus-Fantasy-Writer-235376633158175

Mareena McGirr
4.0 out of 5 stars The very first Tale of Andor
Reviewed in the United States on June 4, 2017
Verified Purchase
The residents of the world of Andor live in a parallel realm very much like our own. However, the major difference between our world and that of Andor - is that the curtain between the physical world and the supernatural one is much thinner than we would think. As a result of this, the residents of Andor are quicker than most people to ascribe a supernatural or magical motive to everything that happens.

In the city of Trebridge, St. Edmund's Church has been sheltering parishioners for as long as most people can remember. The church has also provided a daylight sanctuary for the embattled guardians of the boundaries between the realms. Within the hallowed foundations of this church, humans have found all manner of peace, solace, and sanctuary - yet they have absolutely no idea of the true purpose of St. Edmund's.

Only the four gargoyles who guard the portal to the demonic realm of Gehennathh - Gillen, his scheming second-in-command Orvil, Treasa, and Frens - realize that St. Edmund's has provided so much more than just spiritual support to troubled souls through the years. The church has also been something of a sacred barrier against the malevolent forces that have always sought to escape from Gehennethh. This is why Gillen is so disturbed to learn of the imminent demolition of this sacred ground.

Demons and imps have attempted to prey upon the citizens of Trebridge for centuries, yet the foundations of St. Edmund's have provided divine protection against such demonic intrusion for generations. Gillen is loathe to acknowledge that he and his three fellow gargoyles are severely outnumbered; however this is exactly the type of situation in which they will soon find themselves. These humans just don't realize how much danger they will create for themselves if they demolish St. Edmund's to make way for a series of highrise condominiums.

So Gillen turns to his angelic commanders for guidance. Just as the angels continue to counsel the gargoyle to have patience with Orvil, they have promised to send reinforcements to guard against the subtle disintegration of the spiritual barrier over the portal leading to Gehennathh. While Gillen certainly welcomes his commanders' advice, the leading gargoyle still remains highly suspicious of Orvil's true loyalties. He needs to know that he can trust his fellow gargoyle to have his back during this coming battle.

With malevolent forces set to overwhelm Trebridge much sooner than anticipated, Gillen remains hopeful that the promised reinforcements will arrive as soon as possible. However, will that be soon enough to be of any help? Only Heaven knows...

Despite having this book on my TBR pile for just over two years, I have only just managed to read it now. I was completely drawn into the story immediately and found myself connecting with many of the characters. The author's note at the end of the story says that this is actually a vignette from a full-length novel: There be Demons.

Although the book seems to have been stalled in its publication, I would certainly have loved to read a full-length novel by this author. I definitely look forward to reading more from this author in the future. I would give this story a very strong A!
Read more
One person found this helpful
Helpful
Report abuse

mmmurdoog
5.0 out of 5 stars Wonderful characters. Tragic. Unpredictable.
Reviewed in the United States on October 4, 2019
Verified Purchase
Gillen and Britt are delightful. This seems to establish the beginning of an environment from which they continue to learn and work together.

Kindle Customer
5.0 out of 5 stars Faith not Fear
Reviewed in the United States on September 6, 2020
Verified Purchase
This short story was good. It left a taste of, there should have been to read. I hope there will be a series about their adventures.
Read more
One person found this helpful
Helpful
Report abuse

Christine Rains
3.0 out of 5 stars Gargoyles in a modern setting
Reviewed in the United States on September 22, 2015
Verified Purchase
The church that has stood for centuries over a portal to Hell is being torn down. Gillen and his fellow gargoyles will lose their daytime sanctuary. How will they stand guard now? And how can they do their duty when they're fighting amongst themselves?

A good urban fantasy short story. I like seeing gargoyles in a modern setting, and the plot has potential for a lot more. The infighting among the gargoyles was interesting but it needed more substance.
Read more
Helpful
Report abuse

Mia Theodoratus
5.0 out of 5 stars gargoyles fighting for good!
Reviewed in the United States on January 3, 2017
Verified Purchase
great adventure with my favorite creature-gargoyles!!!!
ok, it is obvious that we are related, but this is my favorite one of her books.
Read more
2 people found this helpful
Helpful
Report abuse

Beth Wilson
3.0 out of 5 stars Short
Reviewed in the United States on September 11, 2017
Verified Purchase
This was much shorter then I anticipated. It also end d on a cliffhanger! No more cliffhangers please. It was intriguing.
Read more
One person found this helpful
Helpful
Report abuse

TJo
3.0 out of 5 stars Needs Coherence
Reviewed in the United States on November 7, 2014
Verified Purchase
A little disjointed. There was use of odd terms with no background, and it seems a little chaotic, and didn't flow well. I liked the basic story line, but it needed more coherence.
Read more
Helpful
Report abuse