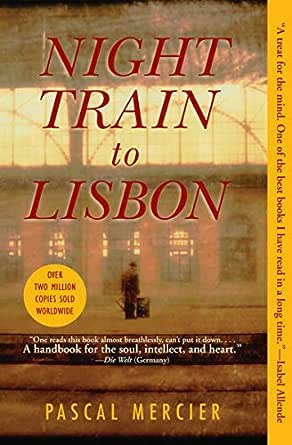 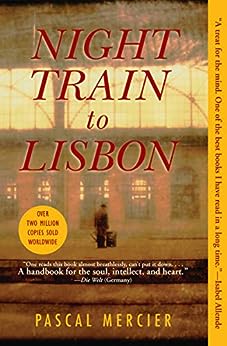 A professor of philosophy, Pascal Mercier was born in 1944 in Bern, Switzerland, and currently lives in Berlin. --This text refers to the mp3_cd edition.

In Swiss novelist Mercier's U.S. debut, Raimund Gregorius is a gifted but dull 57-year-old high school classical languages teacher in Switzerland. After a chance meeting with a Portuguese woman in the rain, he discovers the work of a Portuguese poet and doctor, Amadeu de Prado, persecuted under Salazar's regime. Transfixed by the work, Gregorius boards a train for Lisbon, bent on discovering Prado's fate and on uncovering more of his work. He returns to the sites of Prado's life and interviews the major players—Prado's sisters, lovers, fellow resistors and estranged best friend—and begins to lose himself. The artful unspooling of Prado's fraught life is richly detailed: full of surprises and paradoxes, it incorporates a vivid rendering of the Portuguese resistance to Salazar. The novel, Mercier's third in Europe, was a blockbuster there. Long philosophical interludes in Prado's voice may not play as well in the U.S., but the book comes through on the enigmas of trying to live and write under fascism. (Jan.)
Copyright © Reed Business Information, a division of Reed Elsevier Inc. All rights reserved. --This text refers to an alternate kindle_edition edition.

"'One reads this book almost breathlessly, can hardly put it down... A handbook for the soul, intellect, and heart.' Die Zeit (Germany) 'This excellent novel is a lesson in life and lucidity.' La Quinzaine Literaire (France) 'A sensation. The best book of the last ten years... A novel of incredible clarity and beauty.' Bucher (Germany) 'One of the great European novels of the past few years.' Page des libraires (France)" --This text refers to an alternate kindle_edition edition.

According to its American publisher, Night Train to Lisbon has rung up "over two million copies sold worldwide" and has been lavishly reviewed throughout Europe. Pascal Mercier is a professor of philosophy who writes under a pen name -- his real name is Peter Bieri -- and, obviously, a person of intelligence and erudition, qualities that are evident throughout this novel. But though it is being launched in this country with more energy and enthusiasm than are generally mustered for works of fiction in translation, my hunch is that this will be yet another European bestseller met with indifference on this side of the Atlantic.

It's a strange book. Its protagonist, Raimund Gregorius, is 57 years old, a professor of dead languages at a secondary school -- a "gymnasium" -- in Switzerland. He is set in his ways and most unlikely to change them:

"Mundus, the most reliable and predictable person in this building and probably in the whole history of the school, working here for more than thirty years, impeccable in his profession, a pillar of the institution, a little boring perhaps, but respected and even feared in the university for his astounding knowledge of ancient languages, mocked lovingly by his students who put him to the test every year by calling him in the middle of the night and asking him about the conjecture for a remote passage in an ancient text, only to get every time off the top of his head information that was both dry and exhaustive, including a critical commentary with other possible meanings, all of it presented perfectly and calmly without a soupçon of anger at the disturbance -- Mundus, a man with an impossibly old-fashioned, even archaic first name you simply had to abbreviate, and couldn't abbreviate any other way, an abbreviation that revealed the character of the man as no other word could have, for what he carried around in him as a philologist was in fact no less than a whole world, or rather several whole worlds, since along with those Latin and Greek passages, his head also held the Hebrew that had amazed several Old Testament scholars."

He is comfortable with words, with texts, far less comfortable with people. His childless marriage ended several years ago. Now he lives alone in a drab apartment, talks from time to time with his friend Constantine Doxiades, wears heavy eyeglasses and assumes that the rest of his days will be spent in exactly the same way. Then, on his way to the school on a rainy morning, he is stopped in the street by a woman who writes a telephone number on his forehead with a felt-tipped pen. He is startled but recovers, and in their brief encounter before she disappears he learns that her native language is Portuguese. He feels his life changing. He goes to a Spanish bookstore, where he is drawn to a book called A Goldsmith of Words, by Amadeu de Prado. The dealer, who "found it last year in the junk box of a secondhand bookshop in Lisbon," presents it to him as a gift. The book is in Portuguese, which he does not know, but he obtains a dictionary and laboriously sets about reading it, learning a new language in the process.

As he immerses himself in the book, Gregorius recalls the words of Marcus Aurelius: "Do wrong to thyself, do wrong to thyself, my soul; but later thou wilt no longer have the opportunity of respecting and honoring thyself. For every man has but one life. But yours is nearly finished, though in it you had no regard for yourself but placed thy felicity in the souls of others. . . . But those who do not observe the impulses of their own minds must of necessity be unhappy." He realizes that the chance encounter with the woman and the gift of the book are omens that cannot be ignored. He tells himself that "I'd like to make something different out of my life," that "my time is running out and there may not be much more of it left."

So he quits the school, closes up his apartment, and takes a night train to Lisbon to search for Amadeu de Prado. It isn't an easy journey, since he has spasms of doubt about this "crackpot idea" and more than once thinks to turn back, but he persists. Continuing to work his way through Prado's book, he learns that the author was a doctor, a "poet and a language mystic who had taken up arms and fought against Salazar," the dictator who had kept Portugal under his thumb for four decades beginning in the 1930s. He comes to realize that "I'd like to know what it was like to be him," or at least "what it is like when you imagined being the other person." He wonders: "Was it possible that the best way to make sure of yourself was to know and understand someone else? One whose life had been completely different and had had a completely different logic than your own? How did curiosity for another life go together with the awareness that your own time was running out?"

Prado is dead, of an aneurysm, and so is his wife, but there are others who have survived. The first important one whom Gregorius meets is Prado's fierce sister Adriana, who, since her brother's death, "had lived alone in this house for thirty-one years, thirty-one years alone with the memories and the emptiness left behind by the brother." When her brother was alive, she had been "a dragon, a dragon who protected Amadeu," and now she is the guardian of his memory, preserving his bedroom and office exactly as they were when he occupied them.

There is João Eça, "a tortured victim of the Salazar regime" who knew Prado in the resistance and treasured him as "the godless priest," a man devoid of conventional religious belief yet who "thought things through to the end. He always thought them through to the end, no matter how black the consequences were." There is Maria João, "the great, untouched love" of Prado's life, who is now past 80 but still possesses "such inconspicuous and yet such perfect confidence and independence." There is Prado's younger sister, Mélodie, "a word invented for her, for her presence was as beautiful and fleeting as a melody, everybody fell in love with her, nobody could hold on to her." There is Estefânia Espinhosa, brilliant and beautiful, who had been Prado's "chance to finally leave the courthouse, go out to the free, hot square of life, and live for this one time completely according to his wish, to his passion, and to hell with others," but whom Prado could not bring himself to love because she was involved, however half-heartedly, with his best friend.

Et cetera. Slowly, Amadeu de Prado's portrait takes shape. As João Eça puts it, he was "a walking paradox: self-confident and of fearless demeanor, but also one who constantly felt the look of others on him and suffered from it. . . . Amadeu, he was the most loyal person in the universe, loyalty was his religion." In sum, a difficult and complicated man, but an admirable one who shared Gregorius's attachment to words but was also a man of action.

All of which is interesting enough, but in a rather clinical way. One problem with Night Train to Lisbon is that its plot, if plot is the word for it, consists almost entirely of talk -- talk, talk, talk -- about people and events in the past. The effect of this endless conversation is numbing rather than stimulating. The subject of seeking a new life is rich, as innumerable American novels have made plain, but it's never really clear here whether the central story belongs to Gregorius or to Prado, and there's scarcely a hint of dramatic tension as Gregorius stumbles his way toward what he learns about Prado. Possibly, Mercier's American publisher thinks that his fiction offers the kind of intellectual puzzles and trickery that many readers love in the work of Umberto Eco, but there are no such pleasures to be found here. Night Train to Lisbon never engages the reader, in particular never makes the reader care about Gregorius. It's an intelligent book, all right, but there's barely a breath of life in it.

Copyright 2008, The Washington Post. All Rights Reserved. --This text refers to an alternate kindle_edition edition.

“One of the most thoughtful and entertaining novels to come out of Europe in a decade . . . a smart, heartfelt, thoroughly enjoyable book written for thinking adults, and the most recent incarnation, from Hermann Hesse's Steppenwolf right down to Carlos Ruiz Zafon's The Shadow of the Wind, of that potent, ever-popular myth—the book that changes your life. . . . Go ahead and buy this one—believe me, you'll want to read it more than once.”—Nick Dimartino, Shelf Awareness

“One reads this book almost breathlessly, can’t put it down . . . A handbook for the soul, intellect and heart.”—Die Welt (Germany)

“A treat for the mind. One of the best books I have read in a long time.” –Isabel Allende

“This beautiful book…lit like a fuse that snaked its way into my consciousness, sending out sparklers of light that made me feel more alive, more awake, for days. I hated to see it come to an end. What more can one ask?” –Maya Muir, The Oregonian
--This text refers to an out of print or unavailable edition of this title.
Read more