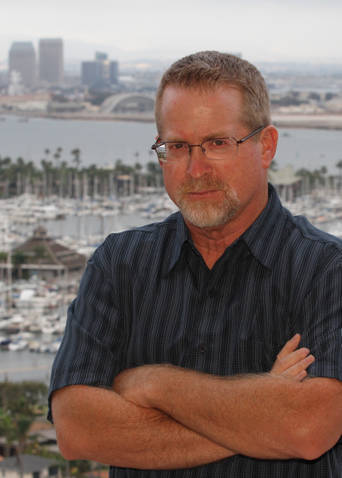 “VERDICT Coyle doesn’t disappoint in this sophomore entry after the Anthony Award–winning Yesterday’s Echoes. In this tale we find all the elements that garnered the first book such high praise: complex characters, snappy dialog, a fast-paced plot, and a clever blending of crime noir tropes with today’s culture. The gods seem to take delight in persecuting Rick Cahill, but readers will relish this fast-paced and complex whodunit.” — Library Journal

Matt has a degree in English from the University of California, Santa Barbara.  He’s taken detours into the restaurant business, the golf business, and the sports collectible business.  His first novel Yesterday’s Echo won the Anthony award for best first novel, the San Diego Book Award for Best Published Mystery and the prestigious Benjamin Franklin Silver Award.  Night Tremors is Matt’s second novel in the Rick Cahill crime series. Matt lives in San Diego with his yellow Lab, Angus. He is hard at work on the next Rick Cahill crime novel.

Start reading Night Tremors (The Rick Cahill Series Book 2) on your Kindle in under a minute.

4.3 out of 5 stars
4.3 out of 5
122 customer ratings
How does Amazon calculate star ratings?
Amazon calculates a product’s star ratings based on a machine learned model instead of a raw data average. The model takes into account factors including the age of a rating, whether the ratings are from verified purchasers, and factors that establish reviewer trustworthiness.
Top Reviews

Karl
4.0 out of 5 stars Rick Cahill - Book 2
Reviewed in the United States on August 5, 2018
Verified Purchase
This being the third Matt Coyle book I've read in the last couple of months, the latest one first, I hope it’s obvious that I quite enjoy this series of Rick Cahill P. I. adventures. As its predecessor “Yesterday’s Echo”, “Night Tremors” also takes place in and around La Jolla California, the longtime home of authors Raymond Chandler and Theodore Geisel (Dr. Seuss). Even L. Frank Baum lived there for a while. The town got more notoriety when the Beach Boy’s sang about surfing there.

“Night Tremors” was a finalist of the Lefty Award for Best Regional Mystery, a finalist for the Anthony Award for Best Mystery, and a finalist for the Shamus Award, so if that collection of praise means anything others also liked the book. All these platitudes aside, “Night Tremors” a continuation to the Cahill series I find an extreme amount of affection for, P.I. Moira McFarlane, Cahill’s sometime helper in sleuthing, whom I mentioned in my review of Mr. Coyle’s fourth book “Blood Truth”, which I happened to have read first (I hope Moira appears in the third book also).

As the series continues, we remember that Cahill has quit his restaurant job at the end of the last book to become a P.I. “Night Tremors” picks up about two years later and our P.I. is stuck doing lowly entry level jobs such as photographing adulterous spouses, and he is bored. So he is drawn to the case of Randall Eddington. Imprisoned in San Quentin eight years earlier, at age 18, for the brutal murder of his parents and sister.

The investigation is complicated by the involvement of a vicious biker gang, the ethically compromised La Jolla cops, who may have known that Randall was framed, or framed him themselves and Cahill’s own obsessive need to study every aspect of the murder.

The books move at a fast pace and are thoroughly enjoyable. If Mr. Coyle listens to his readers he will give us a book staring Moira’s background and adventures.

E. Marro
4.0 out of 5 stars Great character and fine writing
Reviewed in the United States on April 5, 2016
Verified Purchase
This is the second Rick Cahill book but I read it before "Yesterday's Echo." Switching order made no difference to my enjoyment of these books. Coyle's protagonist, Rick Cahill, is a great character: flawed in all the ways humans are flawed, struggling with his memories of his father and the wife he lost, and yet leaning always on the instinct to do what is right -- if not in the eyes of everyone -- at least his own. He is a refreshing change from the macho guy we so often see in noir novels and film.

Coyle has a sure sense of plotting and brings so much life to the setting, San Diego, that it feels like one of the characters. The story takes Rick to some of the darker sides of humanity and more than once I found myself muttering, "Don't do it, don't do it, Rick." But he always did. And that's what makes a great story. I'm looking forward to the next novel in the series.
Read more
4 people found this helpful
Helpful
Comment Report abuse

Ranger Book Reviews
5.0 out of 5 stars A solid mystery-legal thriller filled with colorful characters and mind-bending plot twists; a real page turner
Reviewed in the United States on June 2, 2015
Verified Purchase
Matt Coyle's second Rick Cahill novel is a "can't-put-it-down" page turner filled with unpredictable twists and turns in every chapter. Coyle has a real gift for dropping unexpected developments into an otherwise straight laced mystery plot. His main character, Private Investigator Rick Cahill, is a compelling protagonist -- a former Santa Barbara police officer who left the force under a cloud as the primary suspect in the murder of his own wife. There is plenty of back story to fill in the gaps (hence the title "Night Tremors," a reference to Cahill's PTSD like nightmares). There is even some significant back story to Coyle's previous novel, Yesterday's Echo. Maybe a bit too much. But it did interest me, a first time Coyle reader, in wanting to read that one also.
Rick Cahill is a La Jolla private investigator famous for his ability to stalk cheating spouses -- a line of work he no longer relishes. He desperately needs a more important case to get back some self-worth. An old lawyer associate offers him one -- a re-investigation of an eight year old notorious murder case in which Randall Eddington, the teenage heir to the Eddington Golf fortune, was convicted in the brutal slaying of his stepfather, mother and younger sister. New evidence has emerged suggesting Randall's innocence and the Eddington grandparents are desperate to free their grandson. Cahill is initially dubious but feels compelled to take the case as new information comes to light. But along the way he runs into opposition from nearly everyone involved, from the new witness, from the La Jolla Police Department, from his own boss, from a local motorcycle gang and, most curious of all, from the Eddington's themselves. Every riddle solved uncovers a new one until the end when everything seems to turn on its head.
Matt Coyle is from La Jolla, CA, and his writing style has been compared to Raymond Chandler, La Jolla's most famous mystery writer. I actually find his style more akin to Ross MacDonald (no slouch by any stretch) with his mind-bending plot twists, and not so much like Chandler's rather more colorful prose and straight forward plots. Occasionally there is too much legal thriller here when a psychological thriller style would be more interesting. And some people may read the opening paragraph and think they mistakenly downloaded erotica -- but keep reading -- it's actually a pretty mild introduction to the sleazier side of private investigation work. None of those issues drag down this book's rating. I give it five stars.
Read more
13 people found this helpful
Helpful
Comment Report abuse

Bill Ellingsen
5.0 out of 5 stars Great Mystery-Thriller
Reviewed in the United States on April 28, 2016
Verified Purchase
Great, well written book. There are a couple of technical issues, though. Neither ruined the story, but they did make me chuckle. The first is when private eye Rick Cahill is surveilling a biker bar when a loud Trans Am pulls into the lot. Rick wonders what it is with bikers and loud cars, and surmises it's because they've spent so much time sitting atop 500cc engines. 500cc engines? Maybe on their dirt bikes or lawn tractors, but certainly not their main rides. Later on, the biker is back in his two thousand pounds of black-death car and after Rick. C'mon. I'm guessing an old Pontiac Trans Am would hit the scales at closer to two tons. But the story itself and the writing style is terrific. I'd buy the sequel in a minute if it was out there.
Read more
Helpful
Comment Report abuse

good intrigue
4.0 out of 5 stars Weird characters, sad lives
Reviewed in the United States on August 27, 2016
Verified Purchase
I liked the mystery with all its twist and turns. The lives were mostly sad, I wished it hadn't been quite so negative for the main character, there could have been something a little brighter or happier in his life or at least in his future. Seemed like nothing to look forward to except more sadnesses. The story itself was a god read.
Read more
One person found this helpful
Helpful
Comment Report abuse
See all reviews from the United States

Mr. GEORGE MCVITTIE
5.0 out of 5 stars Good Read
Reviewed in the United Kingdom on July 20, 2017
Verified Purchase
Enjoyed this book from beginning to end.It is 03.40 am but I could not put it down till I had read it to the end. Brilliant.
Read more
Helpful
Sending feedback...
Thank you for your feedback.
Sorry, we failed to record your vote. Please try again
Report abuse

Adrienne Janet Dewhirst
5.0 out of 5 stars Five Stars
Reviewed in the United Kingdom on December 19, 2015
Verified Purchase
not read any of the following yet
Read more
Helpful
Sending feedback...
Thank you for your feedback.
Sorry, we failed to record your vote. Please try again
Report abuse

annrutherford
4.0 out of 5 stars Excellent book
Reviewed in Canada on December 7, 2015
Verified Purchase
I enjoyed this book immensely. The plot was great and the characters so real. If you are seeking a good mystery thriller
This is the book.
Read more
Helpful
Sending feedback...
Thank you for your feedback.
Sorry, we failed to record your vote. Please try again
Report abuse