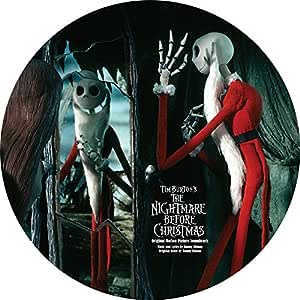 The Nightmare Before Christmas [2 LP][Picture Disc]

4.7 out of 5 stars
4.7 out of 5
545 global ratings
How are ratings calculated?
To calculate the overall star rating and percentage breakdown by star, we don’t use a simple average. Instead, our system considers things like how recent a review is and if the reviewer bought the item on Amazon. It also analyzes reviews to verify trustworthiness.

Brandon Stotts
5.0 out of 5 stars SOUNDS GREAT ON VINYL
Reviewed in the United States on November 30, 2016
Verified Purchase
SOUNDS GREAT ON VINYL!!! I LOVE IT! Sharp and clear! It was a great purchase!
*Please note: The video's sound quality is nothing close to what it sounds like in person.*

John Hiesey
3.0 out of 5 stars Vinyl picture disc version has terrible clicks and pops!
Reviewed in the United States on March 27, 2019
Verified Purchase
The pictures on the discs are nice and I love the soundtrack, but straight out of the sleeve these discs sound like old, scratched-up records the whole way through! None of the other brand new records I have sound like this. I tried cleaning these in my spin-clean record washer with no improvement, so I don't think it's just dirt.

I hope the problem is just with the picture disc version, since picture discs are somewhat notorious for worse surface noise. I'm exchanging these for the plain black vinyl version, which I hope will sound better. I'll update this review depending on what I find out.

I'm also not a fan of the clear vinyl double sleeve that these come in. The edges of the discs almost touch, so it's hard to get the records out without causing damage (see picture). Two separate sleeves would be much better for protecting the records, or for displaying them for that matter.

EDIT:
I got the replacement on black vinyl. It sounds significantly better, but the first disc still has more clicks and pops than it should. Additionally, the center hole of the first disc has flash (extra bits of plastic from the mold) in it, so it's a tight fit on the turntable spindle. I can fix this with a knife, but I really shouldn't have to. I'm increasing my rating to 3 stars, but there still seems to be a quality control issue.

andrew happold
4.0 out of 5 stars beautiful picture vinyl good sound
Reviewed in the United States on April 27, 2020
Verified Purchase
the 2 lp front and back covers look great especially for a fan of nbfc. Consider purchasing a vinyl wall mount for this item because the packaging it comes in is a clear double jacket. Because of this I worry the the 2 lp's will constantly rub against each other which is the only reason it lost ab star. With some picture vinyls the audio quality does tend to have more "surface whisper audio" in the background I've found, but not this one. Again I'd recommend mountinb these 2 records in a wall mount to protect them or purchase alternative holder of sorts
Read more
Helpful
Report abuse

J
4.0 out of 5 stars Still Rockin Nightmare Before Xmas in 2016!
Reviewed in the United States on February 18, 2016
Verified Purchase
Just another 90s kid here reviewing the OST to one of the best movies during the Disney Renaissance. Despite me being a kid at the time, I knew this film was going to leave a permanent mark on me for years to come. Yes, its not your average Disney princess fairytale with magic and fairy godmothers, but I feel that this movie was a haven for those of us who didn't belong to the "handsome prince" bunch. I like a story about people who are broken, empty, and aren't considered "normal" to the rest of the world, but yet they're able to find happiness by finding someone that can just understand and fill the empty voids in each other. (FYI: I'm not one of those emo/gothic kids that live at Hot Topic and are all "ooh this movie's dark" and "love is darkness so let's engrave it in our skins".) >_>

So now, this is the NBC special edition soundtrack that comes with two discs. Disc one contains a total of twenty tracks that contain the entire score of the movie back to back in the exact same order in which they appeared. The sound is amazing and I just can't help singing along as they play. It brings the kid out in me again and I believe if anything does that to you, it's definitely special.

Disc two, on the other hand, in my opinion is a useless addition to this and the reason why I didn't give it five stars. Tracks 1-5 contain songs from the movie covered by various artists (1. This is Halloween by Marilyn Manson 2. Sally's Song by Fiona Apple 3. What's This? by Fall Out Boy 4. Kidnap the Sandy Claws by She Wants the Revenge 5. This is Halloween by Panic! At the Disco). All these in my opinion were terribly done (especially Kidnap the Sandy Claws X_x) and none of them coveyed the emotion like the ones the movie did. Maybe if they chose different artists?..Idk.
The demos were great though, and it was cool hearing Danny Elfman preform since it gives us inside access on how he worked on them.

Overall, it's an awesome CD and a must have for all you NBC fans, but I wouldn't pay $30.00 dollars for it either, especially if the bonus disc isn't even worth $5.00. Anyway I hope you enjoy it like I will for years to come.
xxPumpkin_Kingxx
Read more

Eboucher
5.0 out of 5 stars Whimsy, Wonder, and Cute horror!
Reviewed in the United States on January 21, 2002
Verified Purchase
Danny Elfman has done it again. To me, this is probably one of the albums that can be used to define him as an artist. Aside from composer, Elfman is also the singing voice of Jack, a Trick or Treater (with Paul Reubens and Catherine Ohara!), and other minor roles. With a morbid humorous band like "Oingo Boingo" in his history also, this film allowed Elfman to have a lot of fun with its soundtrack.
A nice thing about this soundtrack is that so much of the music (lyrics AND instrumental!) from the movie is all contained on this album! This allows you to not miss much as far as the score and the storytelling. Some songs such as "Oogie Boogie" are slightly different than the film's final cut, but otherwise it's all very faithful.
The scores are full of wonder and emotion and the lyrics capture the amazement of Jack's discoveries with a fun Halloween twist. The characterization of voices is also done very nicely and the opening theme "This is Halloween" captures the twisted circus of characters that embody this story.
If you enjoyed the movie, the soundtrack is a must have since its such an important part of the film's success. If you also liked this score from Elfman, I also highly reccomend Beetlejuice, Edward Scissorhands, and even Batman
Read more
5 people found this helpful
Helpful
Report abuse
See all reviews

Gordon Horne
3.0 out of 5 stars A tiny bit disappointing
Reviewed in the United Kingdom on December 26, 2019
Verified Purchase
The colour of the vinyl is good, but the pressing itself isn’t great. There’s a lot of surface noise that wouldn’t be present on black vinyl, and the sleeve has very little to offer that hasn’t been seen before. No lyrics, just a track list and some promotional stills we have seen countless times before. Would definitely prefer a black 180g version to this one
Read more
2 people found this helpful
Report abuse

Dave E
1.0 out of 5 stars does not come with album sleeve, but in clear plastic sleeve
Reviewed in the United Kingdom on September 12, 2020
Verified Purchase
Beware item arrives in clear plastic and not a cardboard album sleeve!
Read more
One person found this helpful
Report abuse

slv
5.0 out of 5 stars Look like the image and plays well
Reviewed in the United Kingdom on January 31, 2020
Verified Purchase
Beautiful presentation of the soundtrack. The vinyl is a vibrant and bright orange just like the image. Plays well and the case looks nice as well. A must for any Nightmare Before Christmas fan.
Read more
Report abuse

yvan165
2.0 out of 5 stars Very disappointed with the artwork/packaging
Reviewed in the United Kingdom on November 4, 2017
Verified Purchase
Fault on side 3 (2nd disc, 1st side), where misc skips for a few seconds on the first track. Very disappointed with the artwork/packaging, as I expected more from a soundtrack of Nightmare Before Christmas; this is only 2 picture discs (with repeated prints across the 4 sides), no artwork sleeve or booklet.
Read more
One person found this helpful
Report abuse

Mky
5.0 out of 5 stars Excellent 100%
Reviewed in the United Kingdom on December 1, 2019
Verified Purchase
Magical artwork and music from one of my favourite movies.Its a must for any Tim Burton fan or general soundtrack vinyl collection
Read more
Report abuse
See all reviews

Page 1 of 1 Start overPage 1 of 1
Previous page
Next page
Pages with related products. See and discover other items: before christmas