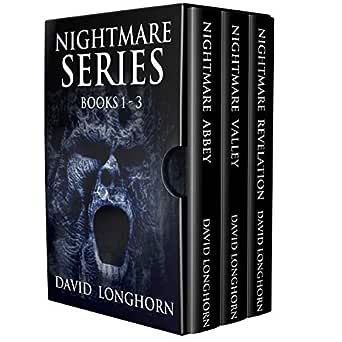 You've subscribed to Nightmare Series Box Set! We will preorder your items within 24 hours of when they become available. When new books are released, we'll charge your default payment method for the lowest price available during the pre-order period.
Update your device or payment method, cancel individual pre-orders or your subscription at
Your Memberships & Subscriptions
There was an error. We were unable to process your subscription due to an error. Please refresh and try again. 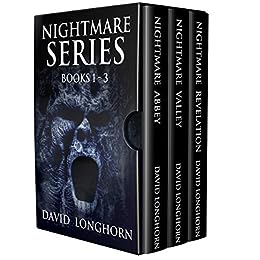 "Any fan of the horror genre should give this series a chance." - Joliet J.

"(The story) grabbed my attention and kept it throughout..." - Reader

"A fast-paced thriller series. Surprises are around every corner..." - Conni J.

"I enjoyed the story." - Mercedes

"Loved the 3 books! I had a hard time putting them down!" - Reader

"The plot of each book was well paced, exciting and had plenty of little twists that held me riveted." - Natalie

Denny was in her good place, imaging a tropical shoreline and waves breaking on white sands. Zoffany's voice came from far away, out of the clear blue sky.

"Now move back in time," the scientist said. "Remember your colleagues at Malpas Abbey."

Denny's imagination conjured up the familiar team that had made a moderately success show about the paranormal. Brie, Matt, Marvin, all appeared, improbably dressed in beach attire - Bermuda shorts, Hawaiian shirts. But they said nothing to Denny, gave no hint of recognition. All of them were dead, slain by Interlopers. Except Frankie, who was missing, presumed alive but not in this world.

As she thought about Frankie's fate, the pleasant vista started to darken. The sea receded, the sky faded to pale gray, and the beach became a grim wilderness. It was the unearthly landscape of the Phantom Dimension.

"I don't want to be here," she muttered, starting to feel alarmed. "This is not my good place anymore."

"Okay, pull back," said Zoffany, soothingly. "Go back to the beach, the sun."

But Denny could not pull away from the grim, alien world. Instead she felt herself carried forward, over the reddish soil, towards the tunnel where she had gone in search of Frankie. She tried to resist, but an irresistible force drew her on. She was underground now, hurtling towards the chamber she remembered all too well. In the dark cavern, she again came face to face with the being that had posed as Lucy, Gould's long-lost sister.

"Hello again, Denny," said the creature, in its high, childish voice. "Thank you for coming to see me."

"No!" Denny shouted, writhing now. She could hear Zoffany's voice, far more distant now, trying to bring her out of the trance. But instead she was drawn closer to the diminutive entity, which reached up and grasped her face. She felt once more the crawling sensation in her mind, black tendrils groping through memories and feelings. She fought against the creeping incursion, lashed out with her mind against the invader.

This is not a memory, Denny thought. This is happening now.

"I can bring her back," whispered Lucy. "If you help me."

Denny was back in the drab laboratory, the scientist anxious, leaning over her.

"You okay?" Zoffany asked. "I was a bit worried there."

Denny sat up, took the scientist by the arm.

"Because I felt her," Denny replied. "She reached out to me. Made me an offer, in fact."

"You contacted her telepathically?" Zoffany asked, eyes widening. "You're sure?"

"And I'm also sure that you and Gould lied to me about her being dead," she said. "Is there anything else I should know?"

Zoffany looked around, then leaned closer.

"Look, this is strictly between you and me ..." she began.

4.5 out of 5 stars
4.5 out of 5
41 customer ratings
How does Amazon calculate star ratings?
Amazon calculates a product’s star ratings based on a machine learned model instead of a raw data average. The model takes into account factors including the age of a rating, whether the ratings are from verified purchasers, and factors that establish reviewer trustworthiness.
Top Reviews

WENDY WELLS
5.0 out of 5 stars Grand, old fashioned, rousing, supernatural adventure!
Reviewed in the United States on March 4, 2019
Verified Purchase
I've been home with the flu, and just finished binge reading the entire Nightmare series Books 1-3. What a great ride! I rarely ever come across a story that is written so skillfully, with good characters, very suspenseful, excellent dialogue, in a horror genre. If you enjoy horror literature, this one's flavor evokes (in the best possible ways), without being derivative, everyone from W.W.Jacobs, William Hope Hodgson, H.G. Wells, C.S. Lewis to Dan Simmons. I hope I'm not a horror snob, but these days so many get 5 star ratings, and when I read them, find the stories so thin, with ambitions so low, I feel like I'm looking for a needle in a haystack. Anyway, this one really stands out. I hardly ever write a book review, but in good conscience, I felt compelled to. And, obviously, and am going to be on the hunt for the next book by this author.
Read more
2 people found this helpful
Helpful
Comment Report abuse

Michael OBrien
5.0 out of 5 stars Buy the whole series!!
Reviewed in the United States on August 6, 2019
Verified Purchase
Once longhorn has you hooked he doesn’t let you off! Thought this would be the typical ghosts and ghouls but I couldn’t have been more wrong! Twists and turns and great writing keep you totally entertained!
Read more
Helpful
Comment Report abuse

dobiediva
5.0 out of 5 stars Great read
Reviewed in the United States on April 7, 2019
Verified Purchase
This series is great. Can't wait to read more from this author
Read more
Helpful
Comment Report abuse

Amazon Customer
4.0 out of 5 stars Creepy collection!
Reviewed in the United States on December 11, 2018
The Nightmare Series is made up of three books: Nightmare Abbey, Nightmare Valley, and Nightmare Revelation. Going in I was expecting a ghost hunter-ish experience, but it goes beyond that. It's not ghosts we have to fear but rather extra-dimensional 'demons' that are referred to as Interlopers that are hell bent on invading our world. These are fun creepy tales loaded with an interesting cast of characters, but I thought the pacing could use a little tweaking. Shorter, punchier chapters. If you like horror stories you might just want to give this collection a try.

This set of book is narrated by Thom Bowers. I'm familiar with his work as he narrated all 9 of the Berkley Street books (excellent series BTW) and once again I thought he did a very good, though I have to be honest and say I wasn't crazy about all his voices this time around (especially Denny) Sorry Thom but the voice you gave her just got on my nerves, lol.

I received a copy of this audio title in exchange for an unbiased review.
Read more
2 people found this helpful
Helpful
Comment Report abuse

Joliet Jill
5.0 out of 5 stars Sir, may I have some more please?
Reviewed in the United States on December 11, 2018
The first thing I did was check for more books in the series. Each book works off the others before but would be a good stand alone book as well. It is a horror series that delve into different genres of horror. Book one was a classic horror story with bumps in the night; book two had that as well but also delved into the fears that parents have concerning their children; the third had both of those aspects but threw in the fears of big brother watching and plotting for their own ends. I enjoyed that the heroes were able to communicate with the "monsters" which added another level to the series. I don't like spoilers so I will end my review here.

Any fan of the horror genre should give this series a chance.

"This book was given to me for free at my request and I provided this voluntary review."
Read more
2 people found this helpful
Helpful
Comment Report abuse
See all reviews from the United States