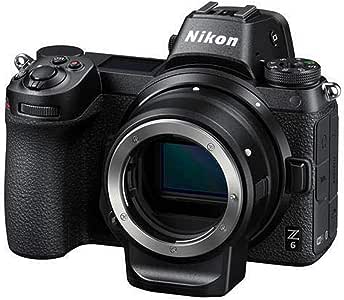 Visit the Nikon Store
4.7 out of 5 stars 26 ratings
| 20 answered questions
11% off Lowest price in 30 days
Available at a lower price from other sellers that may not offer free Prime shipping.

Adaptability. It's about remaining fluid, open. Preparing for nothing, but being ready for anything. Thriving in whatever situation comes along. The Z 6 is perhaps the most adaptable camera we've ever created. It's at the sweet spot of speed, resolution and low-light performance. All combined with the advantages of a lightweight mirrorless design, a revolutionary new full-frame lens mount with matched lenses and seamless integration with Nikon's DSLR system including the F-Mount NIKKOR lenses you love. This is mirrorless versatility as only Nikon could create.

4.7 out of 5 stars
4.7 out of 5
26 global ratings
How are ratings calculated?
To calculate the overall star rating and percentage breakdown by star, we don’t use a simple average. Instead, our system considers things like how recent a review is and if the reviewer bought the item on Amazon. It also analyzes reviews to verify trustworthiness.

sk
5.0 out of 5 stars FTZ adapter works well with Nikon lens'
Reviewed in the United States on March 27, 2019
Verified Purchase
works well with most of my lens'. i didn't rate the face recognition since i don't use that feature of my camera didn't want to spend the $6500 for a D5 and the sensor on the Z6 was fairly close in specs so i took a shot, similar menus but my other D series cameras allow me to access more of the commonly used items without going through the menus via buttons stationed around the camera body. i mainly bought this to use on inside jobs that i'm not allowed to use flash because of the distraction so higher ISO. it does ok and since most of what i shoot never gets used beyond web or power point it does what i need it to do. still on the fence as to whether or not to replace my d810 with a Z7 or just get another d850
Read more
12 people found this helpful
Helpful
Comment Report abuse

E. S. Corbin
5.0 out of 5 stars I LOVE this camera!
Reviewed in the United States on April 1, 2019
Verified Purchase
Feels like my pro body Nikons, not a wimpy thing at all. Familiar controls/menu. I haven't used it in low light but I'm sure it performs just fine. With the adapter I can use all my Nikkor lenses with this lighter weight camera and they work together flawlessly. I'm so impressed with this little beast. Great autofocus. And soon to be released is the firmware update for face recognition, (this model wasn't onboard with that new feature yet) so that will be another plus. Better yet is the video quality and the fact that this camera allows video viewing/shooting through the viewfinder. That is huge. It can be switched to view/shoot viewing on the back screen but who would want to. Also, when making changes to settings they are viewable in real time IN the viewfinder so no more preview button or guessing. I will always pack this camera along, wherever I'm shooting.
Read more
9 people found this helpful
Helpful
Comment Report abuse

Harvey S. Trop
5.0 out of 5 stars An Amazing Camera
Reviewed in the United States on August 22, 2019
Verified Purchase
I recently purchased the Z6 with FTZ Mount Adapter to replace a D500 body I had damaged while hiking. The FTZ Mount Adapter works well with my existing lenses and I found that the autofocus seems faster on this body than my old D500. The menu options are extensive and I was able to easily set up the camera in shutter priority mode, which is my preferred mode. It did take a while to get used to the short lag between putting your eye to the view finder and seeing an image (due to a sensor that detects the eye and turns on a display) but I've now gotten used to it. I recently went on a trip to the Arctic and battery life was excellent.
Read more

RJ
5.0 out of 5 stars The Future
Reviewed in the United States on March 5, 2020
Verified Purchase
After a ton of debate, looking at the Sony a7 and watching countless YouTube videos comparing Nikon Mirrorless to the competition I pulled the trigger and got the Z6. I shoot for a living. Photography and Video so image quality, video quality and ease of use are all mandatory. Also you get 10bit output.

After spending a week with the Z6 two things are absolutely clear. The video quality is remarkably better than my D500, D750 and D850. The IBS on the Z6 is next level and imo even better than Sony's. With Firmware 3.0 that just came out Eye AF and AF in general is fantastic and it's great seeing Nikon pushing out such MASSIVE updates so frequently constantly tweaking the Z6 & Z7.

Image quality, the RAW files are def a step better than my D750. More dynamic range, less noise particularly above ISO 6,400, sharper from edge to edge I'm guessing do to the larger Z Mount. Over all image quality flagship.

Build quality is on par with my D500 and the D5. Honestly holding my D750 now, it feels like a cheap piece of garbage. The Z6 definitely feels like a Pro body, down to the buttons.

EVF is also a joy to use. This was my biggest worry coming from a DSLR and I have to say I really don't even realize I'm using an EVF. In low light you'll notice very slight lag but it's nothing too bad in the trade off of being able to see what your actual image is going to look like.

Nikon and Sony seem to be leading the Mirrorless industry now and I'm glad I went with the Z6 and not the a7. 10 bit video out, better image quality, XQD instead of slow SD, better EVF, you won't regret getting a Z6 or Z7.

Dre_Dawkcide
3.0 out of 5 stars Excellent Product but...
Reviewed in the United States on April 1, 2019
Verified Purchase
Product gets 5/5 for me. What cause me to give it a 3 is the price, i paid 2300 and couple days after it was delivered, it was priced at 1990. I would have appreciated the difference as a credit to purchase a 85mm.
Read more

James L. Bacon
5.0 out of 5 stars Fine camera.
Reviewed in the United States on June 13, 2019
Verified Purchase
Ability to shoot at high ISO is incredible. Image stabilization is wonderful. I do experience some focus problems in low light with non native lenses. But I love it and would buy again.
Read more
5 people found this helpful
Helpful
Comment Report abuse

Brad Barr
4.0 out of 5 stars Great value
Reviewed in the United States on October 6, 2019
Verified Purchase
Great camera. Af loses its mojo in very dark low contrast scenes (like a wedding reception) where the d3s and newer or d750 and newer simply put it to shame. Other than that however its an amazing little camera. And the best video option nikon makes. 25yr pro shooter here
Read more
2 people found this helpful
Helpful
Comment Report abuse
See all reviews