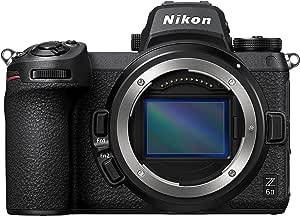 Visit the Nikon Store
5.0 out of 5 stars 3 ratings
| 6 answered questions
Available at a lower price from other sellers that may not offer free Prime shipping.

This is what a hybrid still and video mirrorless camera is meant to be. 24.5MP BSI sensor and high-speed shooting with the buffer capacity to match. 4K Ultra HD video. Next-generation autofocus. The power of dual processors. Two card slots. Tons of creative features and so much more.

Made for Z-mount lenses.

Breakthroughs of the Z Mount, the largest full-frame lens mount of any system, have given way to some of the most advanced, optically pristine lenses ever—NIKKOR Z. The Z 6II is compatible with them all, each one delivering a new perspective and drawing peak performance from the camera.

'Do it all with this versatile full frame mirrorless hybrid that excels in speed, image quality and video performance. Everything a hybrid still and video mirrorless camera is meant to be. High-speed shooting with the buffer capacity to match. 4K Ultra HD video at 60p. 273-point Hybrid AF system with more options. Outstanding low-light capabilities. Dual processors. Dual card slots. Wireless connectivity with smartphones and laptops. Tons of creative features and that’s just the beginning.

Jerry Palmerino
VINE VOICE
5.0 out of 5 stars A Complete Nikon Mirrorless Camera
Reviewed in the United States on November 14, 2020
Configuration: BodyVerified Purchase
The Nikon Z6 was and still is a great camera, but has been heavily derided by reviewers on the 'Tube. Some of the criticisms were unjustified, while others had some merit. The Z6 II fills in any of the gaps that caused these criticisms.

The TLDR of this camera is that its a refined Z6. Nikon listened and updated the Z6 in every was that was necessary.

Still, the reviewers will hold this up against the Sonys and the Canons, but Nikon's target audience is not people switching camera systems. Instead, Nikon's audience is its own current DSLR consumer base who may want to go mirrorless.

The theme for the Z6 II (note that Nikon does not call it a "Mark II") is two of everything.

Internally, this camera is faster and has a larger buffer, due to the inclusion of a second processor.

Continuous High shooting speed has increased by two frames per second from 12 to 14.

There are now two card slots (1 XQD/CFExpress Type B and a USH-II SD card). I wish there were two of the same cards for convenience. The Z5 has two SD card slots if you prefer that.

The Z6 II supports a vertical battery grip with buttons for taking photos in portrait orientation. So now there are two sets of buttons, with the optional grip.

It has the same sensor as the Z6, so no changes there.

Currently as of this writing (November 15, 2020), none of the major photo editing software packages have been updated to support the .NEF raw files it produces. This is normal for newly released cameras, and the updates should be coming soon. In the meantime, you can shoot raw and jpeg so you can edit the raw files later. Alternatively, you can use Nikon's Capture NX software.

My firmware is 1.00. Firmware updates will make it even better (like the video updates coming in February 2021).

It uses the en-el15c battery, but accepts the older en-el15 and en-el15b batteries.

I think the greatest improvement so far is the wide area eye detection, where you can enable a red box in the viewfinder that restricts the eye detection to only eyes inside the red box. This way, you are giving the camera a helping hand as to where you want it to look for eyes. This is a rather unique approach that I don't believe any other camera system supports.

Overall, the Z6 II feels familiar more than it feels different. In fact, if you have a Z6, you may not need to upgrade to the Z6 II, depending on your needs. If you are a still life, street, or portrait photographer, your Z6 is still a great camera. Pros and wedding photographers (business owners) will probably want to upgrade though for the autofocus, dual card slots, and speed improvements. If you shoot fast action or wildlife, I think this is a great upgrade for you due to the speed improvements.

This is the complete camera from Nikon. Nikon has given everyone what they wanted in the Z6 II.

Verified Purchase
5.0 out of 5 stars Probably the best hybrid stills and video camera.
Reviewed in the United States on November 19, 2020
Configuration: Body
It’s the camera Nikon should have released, we know. This refresher brings quite a lot of upgrades from the obvious FPS to autofocus but there are smaller things like constant USB charging and the addition of pitch leveling. There are a few new items in the menu as well as 3 additional AF models. Another nice upgrade is the Blackmagic RAW option for 4K RAW. The memory card options are both speedy, CFExpress/XQD and UHS-II SD cards. It’s a perfect camera for everything. Landscapes, wedding, events, portraits. It has the same dynamic range as a Z7, same color depth, but with much better low light performance in both video and stills. Plus for those shooting weddings, you can get 12-Bit ProRes RAW or Blackmagic Raw. So it’s a phenomenal camera for stills and video.
Read more
3 people found this helpful
Helpful
Comment Report abuse
See all reviews