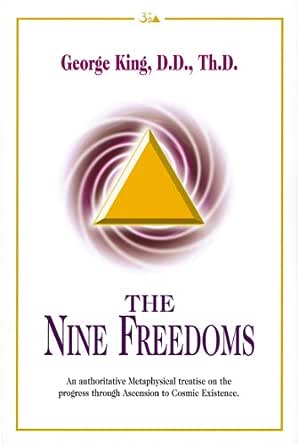 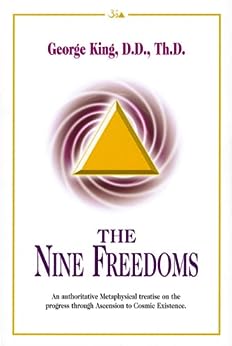 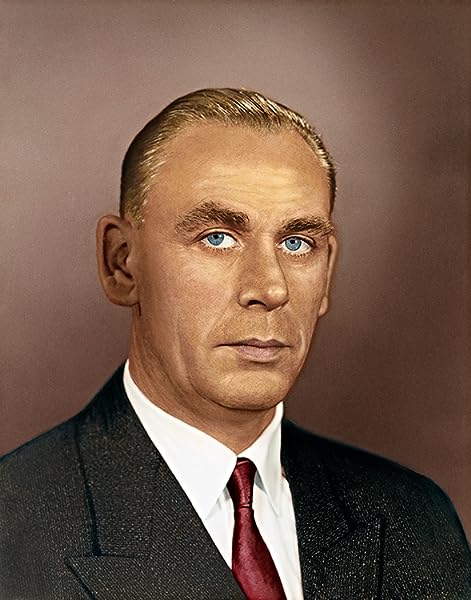 The Nine Freedoms is not just another book - it is a Mission of truths given to mortal man so that he may climb the nine steps to - LIVING IMMORTALITY. It is the first metaphysical text book which clearly outlines the exact path through evolution which man must take in order to become God-man.

This book will give all who read it the major steps towards attainment of the wonderful state of Cosmic Consciousness, then later explain how to pass through the most elevated state possible to man upon Earth, that of - Ascension.

Yet The Nine Freedoms does not stop here! It goes even further than the Bible, the Baghavad-Gita, or the Buddhist conception of Nirvana. For within these pages, the sacred wisdom, kept from man since his inception upon Earth, is now given, revealing the way in which he will eventually attain the glorious state of - interplanetary existence.

The book consists of a mystical text of profound philosophical and occult significance and a searching commentary on the most important part of this text. The soul of this book is the text, which was delivered as nine consecutive Transmissions by a prominent Master of unquestionable Cosmic Status.

The body of the book is made up of the commentary written as a series of carefully thought out essays which reveal the profound truths contained within the words of the unique text. As the body of man is a physical reflection of his soul, so are these commentaries a reflection and readily understandable simplification of the all-embracing jewels of wisdom which form the mystical text. As the pages of The Nine Freedoms are turned, the reader becomes aware that he is being taken on the longest, most dramatic, most important journey of all - the voyage across the nine seas of his evolution. Here, for the first time in history, the passage through the classroom of this Earth to glorious worlds of lasting achievement beyond - is laid out in intimate detail.

The same profound effect which was experienced by those serious metaphysical studentsalready exposed to a series of lectures on The Nine Freedoms, will be enjoyed by every reader, especially as no one will read this book by chance. The individual karmic pattern of every student of this textbook has determined that he shall be given the Divine opportunity of an initiation into truths never before revealed to mankind. --This text refers to an out of print or unavailable edition of this title.

George King was born in England in 1919. At an early age he became interested in religious science and carefully studied all branches of metaphysics. 1944 he began to practice yoga. Throwing all of his efforts into this exact science, he learned how to bring the mystic fire of Kundalini under conscious control unitl he attained the elevated state of Cosmic Consciousness. When in 1954 he was chosen by Cosmic Intelligences as "Primary Terrestrial Mental Channel" Dr. King answered this call with the same single-minded determination he had manifested in the past. He devoted the whole of his life in the service of the Cosmic Masters by founding The Aetherius Society, an international metaphysical order, and acting as the human channel for over 600 transmissions of profound revelation from these Cosmic sources. --This text refers to an out of print or unavailable edition of this title.

Vin
5.0 out of 5 stars A classic work yet provides a new spin on the subject of spiritual initiations
Reviewed in the United States on October 18, 2015
Verified Purchase
I purchased this around 2 years ago. At first, I have to admit that I find the author's works re: the addition of the extraterrestrial narrative to be quite off-putting. But this book changed my mind. I find the content to be of a quality that is comparable to great esoteric works of our time such as those of HP Blavatsky and AA Bailey. The message contained in this work - the 9 freedoms or stages of cosmic initiation - remained consistent with the universal truths and values present in the Wisdom tradition down the ages, which makes it believable. Of course, the book does not contain the depth and breadth of the revelations in HPB's "The Secret Doctrine" (or AAB's 24 volumes of esoteric philosophy) due to its smaller size, but the core of the teachings are there. Possibly, the rest of the teachings can be found in Dr. King's other books.

The main mystery in my mind is the "Third Satellite" and the identity of the Adept named "Mars Sector 6". It is fully explained in Chap.4. However, to my mind, the satellite could be an esoteric centre of force or an energy vortex hovering above our planet and may not necessarily be an actual spacecraft, in the same way that the name of the adept could just be a code-name. But to think about it from a much higher perspective, why discriminate an extraterrestrial adept, if they exist at all? The Wisdom tradition, just the same, implies that evolution of life on Earth or Terra had been helped by advanced Souls and Adepts coming from Venus.

Another impressive observation from this work, is the consistent emphasis on the law of karma, and the principles of love and service as important ingredients to higher initiations. This is a welcome relief from all the newer traditions around that centers on consumerism philosophies based on the "me-the-center-of-the-universe" or "mindfully-now-and-me-only" sort of paradigms that separates one from the entire problems and concerns of humanity (group consciousness).

Each chapter is also concluded with Dr. King's recommended readings. I would suggest the addition of Alice A Bailey's, "Initiation: Human and Solar" at the very end so that the serious student will get a parallel understanding of initiation terminologies from similar metaphysical traditions.
Read more
15 people found this helpful
Helpful
Report abuse

Emnutter
5.0 out of 5 stars Far fetched but extremely well written
Reviewed in the United States on August 12, 2017
Verified Purchase
The information is quite far fetched but the book is very well written and the lessons in the book are worth following. The problem with channeled information is their is so much of it out there and they all differ from each other so one does not know who to believe. I guess we will never know the real truth until we have passed from this physical plane and discover it for ourselves. I am a personal follower of the quantum mechanics theory and that we reside in a multiverse, our beliefs whatever they may be shape and create our personal realities. I gave the book five stars because of how intelligently and well written it is and the great lessons about love and service to others are rules everyone should live by.
Read more
2 people found this helpful
Helpful
Report abuse

Milind
5.0 out of 5 stars Great spiritual insight into our existence
Reviewed in the United States on September 2, 2016
Verified Purchase
Excellent metaphysical book and writings on why were are here and the purpose of our lives. George King (and the atherius society in general) has a lot of good spiritual information provided directly from the revelations made to the author while in deep meditations.
Read more
4 people found this helpful
Helpful
Report abuse

Julian
5.0 out of 5 stars Deeply profound, yet extraordinarily accessible.
Reviewed in the United States on January 19, 2017
Verified Purchase
It covers a huge amount of ground without being the slightest bit verbose. It's unique in it's content but also in the brilliant simplicity of it's delivery. Whether you're new to spiritual philosophies, or an old hand, it will give you something to think about.
Read more
2 people found this helpful
Helpful
Report abuse

Ginny
5.0 out of 5 stars Very advanced
Reviewed in the United States on January 2, 2014
Verified Purchase
This book is for the extremely opened minded seeker of truth. I will read and reread this book until all it's elements become like second nature to me.
Read more
6 people found this helpful
Helpful
Report abuse

Brian Keneipp
5.0 out of 5 stars This book will change your life
Reviewed in the United States on June 26, 2013
Verified Purchase
I love this book. It brings together the philosophy of the East and West, and mixes in the mystery of UFOs and life after death and you have a recipe for a whole new view of life that has changed my life for the better in all ways. Though you may not be able to discuss all the points in it with all your friends and relatives! But that is why the first freedom is bravery!
Read more
7 people found this helpful
Helpful
Report abuse
See all reviews

Veena H
5.0 out of 5 stars George King
Reviewed in the United Kingdom on February 25, 2018
Verified Purchase
I am really happy with my book. Am enjoying it.
Read more
Report abuse

Mystic Faery
5.0 out of 5 stars Life changing
Reviewed in the United Kingdom on February 13, 2013
Verified Purchase
This book is inspirational and I recommend that everyone reads The Nine Freedoms. Dr George King imparts amazingly deep knowledge in this book to all who are ready to read it.
Read more
One person found this helpful
Report abuse

Margaret Grey
5.0 out of 5 stars The Spiritual Journey.
Reviewed in the United Kingdom on December 26, 2016
Verified Purchase
Read this book if you want to make serious progress on your spiritual journey.
Read more
One person found this helpful
Report abuse

Mr. N. A. Fellows
5.0 out of 5 stars Five Stars
Reviewed in the United Kingdom on October 3, 2017
Verified Purchase
quite an interesting book
Read more
Report abuse
See all reviews
Back to top
Get to Know Us
Make Money with Us
Amazon Payment Products
Let Us Help You
EnglishChoose a language for shopping. United StatesChoose a country/region for shopping.
© 1996-2021, Amazon.com, Inc. or its affiliates