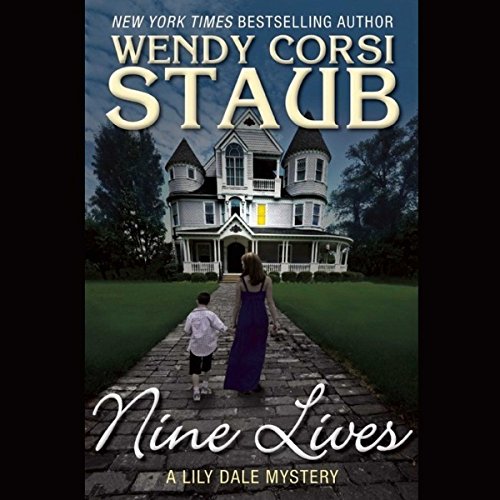 Free with Audible Plus Trial
$0.00

List Price: $24.47
You Save: $10.48 (43%)
By completing your purchase, you agree to Audible’s Conditions Of Use
Sold and delivered by Audible, an Amazon company
Share

4.6 out of 5 stars
4.6 out of 5
149 global ratings
How are ratings calculated?
To calculate the overall star rating and percentage breakdown by star, we don’t use a simple average. Instead, our system considers things like how recent a review is and if the reviewer bought the item on Amazon. It also analyzes reviews to verify trustworthiness.

booklover
5.0 out of 5 stars A BIT OF PARANORMAL SUSPENSE
Reviewed in the United States on July 23, 2016
Verified Purchase
Bella Jordan, a recently widowed woman, along with her 5-year-old son, Max, plan to start anew. Actually, Bella has lost just about everything trying to pay off all the medical and funeral bills. Her only hope at this time is to head to Chicago to spend the summer with her mother-in-law.
Instead she winds up in Lily Dale, New York… an unconventional little village that seems to be home only to psychic mediums. They were only there to drop off a pregnant cat … Chance The Cat… according to the cat and her son Max. But the cat’s owner died recently, leaving the cat an orphan and a busy inn without a keeper.

Agreeing to help out temporarily, she feels that the owner had been murdered. With so many unorthodox neighbors and friends of the deceased, as well as the tourists descending on their little village, Bella isn’t sure what to think.

I have read a lot of Wendy Corsi Staub books over the years. This is a new cozy mystery series ..not my usual genre. But I loved this book,
I loved all the people … psychics one and all. They are welcome her into their circle. Bella couldn’t be safer … until she starts investigating a murder.

One of my favorite characters is Chance The Cat, who plays a very important part of this story. Besides the fact that she seems to be able to walk through walls, she’s just a fascinating creature and as I was told, based on the author’s real cat.

Nine Lives is a bit suspenseful, but without a lot of violence. I thought the ending was absolutely perfect. I sincerely look forward to see more of the Lily Dale gang.
Read more
14 people found this helpful
Helpful
Report abuse

Mama Cat
5.0 out of 5 stars Love this Delightful New Cozy Mystery Series!
Reviewed in the United States on July 25, 2017
Verified Purchase
Oh, how I miss having young Max and his mom, Bella, in my car! These delightful characters of Wendy Corsi Staub’s, in the first novel of the Lily Dale mystery series, have been windshield companions by way of audio CD’s in recent days.

As one who loves cozy mysteries, I was excited to listen to the first of the author’s cozy series. It is so much better than I could have imagined! Bella, a young widow and mother to little Max, was recently laid off from her teaching position. With no other place to go, they were driving from New York to Chicago where they would live with her stern mother-in-law.

Searching for a campground that nobody has heard of led Bella and Max off the freeway, along with a very pregnant cat sitting across their lane, forcing them to stop and pick her up. They went from a local vet who read the microchip data, to the address of the owner in Lily Dale. They learned from a neighbor that Leona, the owner of the cat (that Max named Chance the Cat), died unexpectedly and mysteriously merely days earlier. What began as a one-night stay in the guesthouse that Leona owned turned into a few more days. Bella helped with guests while waiting for her car to be repaired. Lily Dale was having its annual event with psychic mediums and seminars, and the inn was fully booked.

Some positive things occur; Max finds a young friend to play with. The vet paid a house call to see how Chance the Cat is and befriends the family of two plus cat. His help is invaluable with the kittens, especially with the tiny one who needs dropper feeding. But the unusual things begin, such as the visions Bella have of herself in the mirror. Chance disappearing from a locked room and turning up somewhere else. Max’s friend Jiffy talking about going for treasure in the lake after seeing someone drop what looked like a chest into it late one night. And it only gets worse.

I really, really like Bella and Max. The narrator brings to life to their delightful and loving dialog, as does the author with these endearing characters. Others who live in and near Lily Dale are likable while a bit eccentric. The vet, the mechanic who works on Bella’s car, and the person who inherits the guesthouse are welcome people in Bella’s life, at least for the short time she plans to be in this little town. This mother-son family is appealing, and I want better for them than Bella’s mother-in-law, whose home seemed so…sterile!

The plot is infused with twists and turns that begin with the initial sightings of Chance the Cat before they even reach Lily Dale. While some surprises can be filed away in the back of one’s mind for later reference, some change the landscape of the entire mystery. Bella begins to ponder whether Leona died as the result of an accident or from something more sinister, even otherworldly…even though she didn’t believe in paranormal activity. The ultimate terrifying crisis and explosively stunning denouement resolves the events in Lily Dale. The culprit was someone totally off my radar, someone I had not considered. I highly recommend Nine Lives to fans of Wendy Corsi Staub, well-written cozy mysteries, and a protagonist who didn’t intend on being a sleuth. I am now looking forward to reading the third in series, Dead of Winter, when it is released later this year.

From a thankful heart: I received the audio CD's of this novel from the author through a Writerspace contest; no review was requested.
Read more
One person found this helpful
Helpful
Report abuse

Chloegirl
5.0 out of 5 stars Very Sweet Cozy!
Reviewed in the United States on October 26, 2015
Verified Purchase
This is a charming cozy that tugs at the heart strings. A young woman, recently widowed, with a 5 yr. old adorable son, after losing everything starts out to Chicago to go live with her mother-in-law. Along the way they happen upon a pregnant cat. After having a local vet check her out, Bella & her son decide to take the cat to her owner. What happens after that rolls out in a sweet story of how Bella learns to start fresh as a widow & mom. This story has a nice paranormal twist. I will warn you to have some tissues handy as I shed both a few sad & happy tears.
Read more
5 people found this helpful
Helpful
Report abuse

Amazon Customer
5.0 out of 5 stars Love her writing
Reviewed in the United States on September 28, 2017
Verified Purchase
I have followed the Lilydale series through the years. Having been there myself, I love how she keeps its real as well as quaint, cozy and warm in her explanation of this unique area. She kept it true to the location. She shows the community for what it is...close and tight knit. The story was endearing although I wish it had been longer. The mix of characters added with this story fit beautifully with the nature of the area. I recommend not only this story but the entire series. This is a series for casual enjoyment. You will want to follow the characters in these stories to see how their lives move. I look for to seeing Calla in Something Buried, Something Blue. It's been awhile. I liked how Lilydale embraced Bella and Max, helping them adapt to their loss, care for them and give them choices.
Read more
Helpful
Report abuse

MEB Haskell
4.0 out of 5 stars Lilydale: a place, a mood, a mystical experience or just a mystery?
Reviewed in the United States on October 21, 2016
Verified Purchase
Having visited Lilydale for years, I picked up this novel for curiosity sake. As expected, it brought back memories of the quaint small community where I had so many friends and experiences. This book did not disappoint in conveying the sense of place, although it was a little darker than I remember. The mystery, and questions of whether or not a murder had taken place, was well done. It was only near the end of the novel that the crimes, and the reasons for them, were revealed.

This would be a good read for anyone familiar with Lilydale as well as for anyone familiar with Spiritualism and mediums. I'm not sure if a general mystery buff will enjoy it, or be annoyed by the mystical nature of the stories.
Read more
2 people found this helpful
Helpful
Report abuse
See all reviews
Back to top
Get to Know Us
Make Money with Us
Amazon Payment Products
Let Us Help You
EnglishChoose a language for shopping. United StatesChoose a country/region for shopping.
© 1996-2021, Amazon.com, Inc. or its affiliates