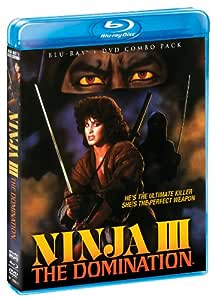 A telephone repairwoman becomes possessed by the spirit of a Japanese assassin.

Martial arts and horror collide headlong--with no apparent survivors--in Cannon Films' Ninja III: The Domination (1984), one of the most bizarre emissions from the '80s cult/camp netherworld. Though billed as a sequel, Ninja III has no connection to its predecessors--Enter the Ninja (1981) and Revenge of the Ninja (1983)--beyond the oaken presence of Sho Kosugi, who spends half of the picture's running time off camera before earning a showcase for his skills in the final third. The majority of screen time is instead afforded to actress Lucinda Dickey (Breakin') as a telephone line worker/aerobics instructor who becomes possessed by the spirit of an evil ninja (David Chung) shot down by the police after a deliriously violent golf course assault. Dickey is soon tricked out in ninja gear and tracking down the officers involved in the killing. This does not sit well with new (and alarmingly hirsute) boyfriend and cop Jordan Bennett, who brings in an exorcist (James Hong from Chinatown and Blade Runner) to solve matters before Kosugi eventually arrives to face off against the ninja's ghost. Under the direction of B-action vet Sam Firstenberg--who also oversaw Dickey in Breakin' 2: Electric Boogaloo that same year--Ninja III is a fast-paced crazy quilt of inexplicable story choices (the ninja spirit "communicating" with Dickey through a video game; Dickey seducing Bennett with a can of V8), outrageous fight sequences (the opening golf course attack, which amasses a colossal body count in its 10-minute-plus running time), wildly divergent acting styles, and scenes cribbed from Hollywood features (a nod to Poltergeist when Dickey is dragged into her closet by unseen forces while avant-garde singer Diamanda Galás provides supernatural cries on the soundtrack), all liberally salted with '80s cultural ephemera (aerobics, Patrick Nagel prints, neon, processed men's hairdos). In short, Ninja III is a junk movie devotee's dream: a picture that operates by its own lopsided rules of sanity and logic while attempting to adhere to the absurd requirements of its story and the ninja subgenre. Scream Factory's two-disc Blu-ray/DVD combo is light on supplemental features but does provide an amusing and informative commentary track by Firstenberg and stunt coordinator Steve Lambert, who enthusiastically recount the challenges of working within the Cannon system and mounting a martial arts movie on a limited budget. Though a trailer is mentioned on the cover packaging, none is present on the discs, but the array of international poster art makes up for its absence. --Paul Gaita

Page 1 of 1 Start overPage 1 of 1
This shopping feature will continue to load items when the Enter key is pressed. In order to navigate out of this carousel please use your heading shortcut key to navigate to the next or previous heading.
Back
Next
Pages with related products. See and discover other items: karate movies, ninja movies, sho kosugi, Black Friday Cameras