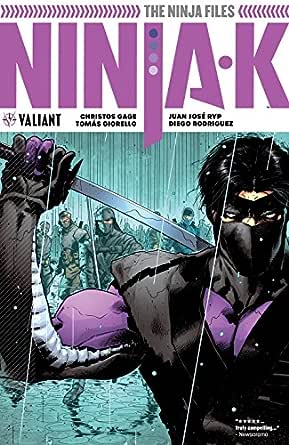 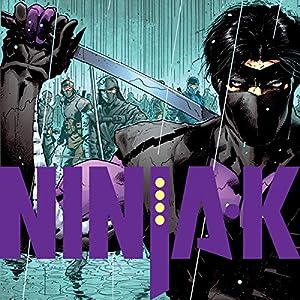 When will I be charged for each book?
Pre-orders will be placed within 24 hours, but you will not be charged until books are released and ready for download. We will automatically charge your default payment or other payment method on file.
You've subscribed to Ninja-K! We will preorder your items within 24 hours of when they become available. When new books are released, we'll charge your default payment method for the lowest price available during the pre-order period.
Update your device or payment method, cancel individual pre-orders or your subscription at
Your Memberships & Subscriptions
There was an error. We were unable to process your subscription due to an error. Please refresh and try again. 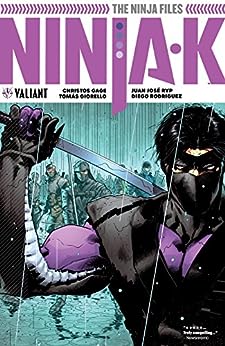 Sawh82
5.0 out of 5 stars Ninjawesome
Reviewed in the United States on May 1, 2018
Verified Purchase
A great passing of the torch from Kindt to Gage. Finally someone explains why the brits have ninjas.
Read more
4 people found this helpful
Helpful
Comment Report abuse

Ben BrownTop Contributor: Star Wars
4.0 out of 5 stars Now THIS is how you do Ninjak.
Reviewed in the United States on May 1, 2018
I liked, but didn’t love, most of Matt Kindt’s “Ninjak” run from 2015 to 2017 – if I’m being honest, the character of Ninjak just hasn’t ever appealed much to me, which is why the series itself – while fun – tended to always fall on the lower end of my personal “Valiant spectrum.” Hence, when news broke that Christos Gage would be penning an all-new series featuring our favorite comic book ninja…well, I mostly just shrugged it off.

Boy, was I wrong. Maybe lowered expectations played a role, but I was shocked by how much I enjoyed this first arc of “Ninja-K.” Part of the credit undoubtedly also goes to Gage’s approach: unlike Kindt, who’s never met a metaphor/analogy/symbol he couldn’t reverse-engineer (and believe me, I’m a big fan of Kindt’s), Gage’s take is much more straight-forward, favoring bombastic over nuance. Comparing the two titles, I’m actually reminded quite a bit of the discrepencies between Kieron Gillen’s previous, more high-minded “Darth Vader” series and Charles Soule’s current, more blockbuster-y take – both approaches have their merits, but if asked which one was purely the most FUN, it’s hard to argue that Soule’s doesn’t deliver slightly more in that arena.

The same holds true for Gage’s “Ninja-K.” Is it the deepest series you’ll ever read? No. Is it a great ride? Undoubtedly (and, as penciled by Tomas Giorello, it also happens to be one great-LOOKING ride, too).
Read more
5 people found this helpful
Helpful
Comment Report abuse

Bryan
5.0 out of 5 stars Ninja goodness!
Reviewed in the United States on August 26, 2018
In the vein of Brubaker/Fraction Immortal Iron Fist... Christos Cage does the same with Ninjak with Collin King not being the only ninja in M16. Lots action and revelations and great art! Get it!
Read more
Helpful
Comment Report abuse
See all reviews