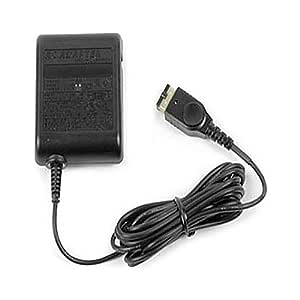 Plug in the Nintendo DS AC Adapter into any wall outlet to recharge your battery pack. The small, lightweight design allows you to pack the AC adapter with your handheld system for a convenient back-up power source.

4.5 out of 5 stars
4.5 out of 5
407 global ratings
How are ratings calculated?
To calculate the overall star rating and percentage breakdown by star, we don’t use a simple average. Instead, our system considers things like how recent a review is and if the reviewer bought the item on Amazon. It also analyzes reviews to verify trustworthiness.

.
5.0 out of 5 stars Works great
Reviewed in the United States on February 16, 2016
Verified Purchase
Thanks to this replacement charger, I was able to charge up my original Nintendo DS for the first time in years, since I'd lost the original charger. The replacement charger is also fairly compact - it fits in a preexisting carrying case I had right alongside the original Nintendo DS. No, it's not a genuine Nintendo charger. But as long as it serves its purpose, who cares, right? Totally recommend this product.
Read more
3 people found this helpful
Helpful
Report abuse

Nick
5.0 out of 5 stars It works
Reviewed in the United States on February 25, 2021
Verified Purchase
I still have it years later
Read more
Helpful
Report abuse

BradK
2.0 out of 5 stars Worked great, but fell apart
Reviewed in the United States on April 12, 2013
Verified Purchase
This was a fine replacement for my original DS charger, but not very sturdy. It only lasted for about a month until the main outer plastic part broke in half after banging against the side of a desk - and not very hard at all. The thing just fell apart. It actually still worked even after that, but I was a bit reluctant to use it with the bare wires just sitting out in the open. GOOD JOB, CHINA
Read more
Helpful
Report abuse

RDeCoteau
5.0 out of 5 stars Works well for a long time
Reviewed in the United States on June 19, 2018
Verified Purchase
I bought this years ago. Still works.
Read more
Helpful
Report abuse

Sarah
1.0 out of 5 stars DONT WASTE YOUR MONEY!!
Reviewed in the United States on May 21, 2014
Verified Purchase
Tried to return this POS but the return shipping cost just as much as we paid for the item itself. It never worked. Completely worthless waste of money. This company really needs to invest in some quality control or be shut down altogether for unethical practice. I'm disappointed and most importantly so is my 5 year old son who this was for.
Read more
Helpful
Report abuse

RICHARD C.
5.0 out of 5 stars OEM
Reviewed in the United States on February 28, 2017
Verified Purchase
IT'S GOOD TO HAVE THE ORIGINAL STUFF!!! DON'T HAVE TO WORRY ABOUT CHEAP KNOCK OFF'S FAILING!!! MIGHT HAVE TO PAY A LITTLE MORE BUT IT'S ALL WORTH IT!!!
Read more
Helpful
Report abuse

Marc Myers
5.0 out of 5 stars Great charger
Reviewed in the United States on January 4, 2016
Verified Purchase
Works as good as the original charger. My wife is super happy because her original and aftermarket charger died and this one was very affordable and works great.
Read more
Helpful
Report abuse

Wayne
3.0 out of 5 stars Adapter? Which adapter?
Reviewed in the United States on July 20, 2011
Verified Purchase
The product listed is an adapter for a Nintendo DS (original) or a Game Boy Advance SP. The Nintendo DS Lite and later versions use a different adapter. The original products used an adapter with a part number of NTR-002.

The problem is that Nintendo no longer makes that adapter, and it's not clear that they were ever the manufacturer. They may have supplied several different versions, and the one I got was manufactured by Mitsumi.

Amazon's rules require vendors to sell the exact item pictured, and the picture appears to be the Mitsumi that was included with at least some of the games. The one I received did not have the Nintendo logo on the rear, as some of them did, but it's unlikely that any new ones would.

At the time I wrote this, the plurality of reviews were one star. However, they were written by people who never got the correct adapter, either because one of many sellers sent the wrong one, or because they bought the wrong one without realizing that different models of DS use different adapters. Thus the negative reviews (as of this writing) have nothing to do with the correct adapter that you should expect. And with about 15 different sellers (changing constantly) there's no reason to believe that any of that has to do with what you would get from an honest seller.

The bottom line is that in theory you should be getting an NTR-002, but they are no longer made. And a USG-002 with the correct plug for the original DS is essentially the same thing as an NTR-002. So if you get the item pictured, you are getting essentially the same charger (made by the same company) as the one that came with your DS. If you are not getting that item, then you are dealing with a seller who is breaking the rules and you are entitled to a full refund, including shipping.

Given that Nintendo was including what was essentially a generic adapter made by a third party, getting the same adapter should give you a reliable one. But that same adapter, as long as it's the correct one, is not much different from those in the one dollar range. When you factor in shipping costs, and the assurance that Amazon guarantees you will get the correct one, this one is still likely to be your best bet.
Read more
63 people found this helpful
Helpful
Report abuse
See all reviews