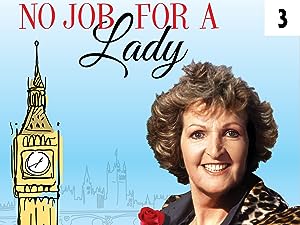 No Job For a Lady

(44)7.11992NR
Jean Price (Penelope Keith, To the Manor Born, Good Neighbors) has just been elected Member of Parliament for the left-wing Labour Party. Now her real work begins: getting along with her chauvinist fellow MPs while navigating the Machiavellian world of Westminster.

WeinrothReviewed in the United States on June 15, 2014
4.0 out of 5 starsFunny and not dated
Verified purchase
I love Penelope Keith, let me get that out there first. "To the Manor Born" and the one about neighbors whose title I've forgotten made her one of my favorite people. This series uses her to advantage as a smart, tenacious and funny new MP who learns each week how government runs amok and why one should expect absolutely nothing to make sense. It isn't outlandish. It's much too like the American Congress today. After a couple of 'how to' lectures from her cronies, I wonder why Keith doesn't run away screaming. But that's her charm in this series. I'm enjoying the other seasons as well.
Report abuse

DebbyReviewed in the United States on April 1, 2015
5.0 out of 5 starsFive Stars
Verified purchase
Funny lady and funny show. Wish they had made more.
Report abuse

prisrobReviewed in the United States on June 5, 2017
4.0 out of 5 starsJust Exactly What Do You Do
Happened upon this series via AcornTv. It is a British sitcom that aired on ITV between 1990 and 1992. It stars Penelope Keith, who plays Jean Price, a newly elected Labour MEmber of Parliament, who is trying to figure out her role. It was written by Alex Shearer, and directed and produced by John Howard Davies. This series is quite humorous that also reflects the everyday battles of life.

Jean Price, is the MP for an unknown inner-city constituency, and her life in the House of Commons. She is married to Geoff Price, and as well being an MP she has to try and look after her house and children. We never see the interior of the Commons, and most of the scenes take place in her small, crowded, shared office. Her Scottish colleague Ken Miller, is a good friend and mentor. However, what we learn is the manner in which politicians get around their jobs. As we know most of the politicians in the US use much of their time getting re-elected. That seems to be one of the primary jobs of these MP's, however Jean Price wants to actually work for her constituency. There are other characters who come and go, and most of the episodes have a real issue that is interspersed with humor. If course, Jean is one of the first female MP's, so she must deal with the inherent sexism, and she does it with great aplomb.