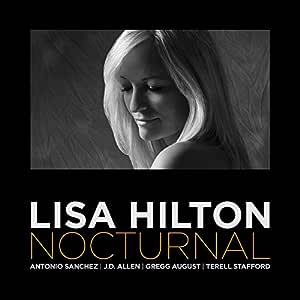 Lisa Hilton Format: Audio CD
4.4 out of 5 stars 4 ratings
See all 3 formats and editions Hide other formats and editions
Includes FREE MP3 version of this album.&nbspProvided by Amazon Digital Services LLC. Terms and Conditions. Does not apply to gift orders.&nbspComplete your purchase to save the MP3 version to your music library.
Available at a lower price from other sellers that may not offer free Prime shipping.

Composer/pianist/band leader Lisa Hilton has completed her eighteenth release, NOCTURNAL with her most impressive band to date – Hilton again on keys, with Antonio Sanchez/drums, Terell Stafford/trumpet, Gregg August/bass and J.D. Allen on tenor sax. It will be released January 22nd, 2016. The eleven tracks show a remarkable emotional depth and clarity from all band members with plenty of virtuosic moments. For lovers of tradition, the title track Nocturnal, Whirlwind and the classic, Willow Weep for Me allow for Stafford’s fluid trumpet and flugelhorn and Allen’s husky tenor tone to shine. The Latin flavored, Spark in the Night, showcases Sanchez and August and their extensive Latin backgrounds in a catchy and appealing way, while Twilight is impressionistic. A surprise choice is The Pixies’ Where is my Mind – so simply stated, then turning in another direction by the finale. It’s on the bluesy Seduction and the tender An August Remembered that Hilton’s flowing lines and compositional ideas are highlighted. Also included is Hilton’s Midnight Sonata for piano, bass and drums: I. Symphony of Blues II. Desire and III. Midnight Stars. “I have 200+ tracks on iTunes that I have composed or arranged now,” Hilton explains, “and felt inspired to create a larger work of music. Midnight Sonata merges a classical format with the freedom of American jazz and blues in a method I call trans-genre. Many of our great American composers composed in classical music that I have been inspired by: George Gershwin, Duke Ellington and Dave Brubeck to name a few. It was challenging as well as being a lot of fun compositionally.” While the sonata form is in tact, Hilton used improvisation, blues, modal washes, shifting key centers, free jazz, impressionism and extended technique in creating a refreshing yet familiar vibe. NOCTURNAL is evocative, expressive and perfect for jazz and piano fans everywhere.

Mastery of the keyboard... her music offers a unique blend of concepts of the past and future that's quite beautiful. --Burning Ambulance

No one plays, writes or puts together a band better than Lisa Hilton. --Voice Of America syndicated radio show/Russ Davis

Ricky Kej
5.0 out of 5 stars Sumptuous production!
Reviewed in the United States on October 14, 2016
Verified Purchase
"Nocturnal" plays like a larger than life entertainer of the old days when music was BIG band and grandiose. I just love the title track, the intricate melody with the piano and saxophone and trumpet such a beautiful blend! I loved the atmosphere that "Seduction" creates with its languid tones of the piano. This album with its myriad moods has got the vastness of a sumptuous spread at a lavish dinner. And its all delicious! :-) :-) :-)
Read more
Helpful
Comment Report abuse

Edward69
4.0 out of 5 stars about the product
Reviewed in the United States on April 22, 2020
Verified Purchase
Excellent purchase, good condition of the disks, happy with the purchase.
Read more
Helpful
Comment Report abuse

DJ Hurricane
5.0 out of 5 stars The brilliant composing and playing is a tour de force.
Reviewed in the United States on January 23, 2016
To provide you with a frame of reference, I'm of the generation that was listening to Rahsaan Roland Kirk, Miles, and Pharaoh in NYC in the late 60s. Since 2006, I have been a jazz DJ on KVNF community radio in western Colorado. I became aware of Ms. Hilton soon after my arrival at the station. To put it mildly, I was incredibly impressed, one might even say blown away. I play many of her albums frequently. When she releases a new one, I'll play the whole damn thing in a three hour show, interweaving the new tunes in and among other artists. Invariably, listeners call in with "Who IS that piano player??!!" To which I give them a welcome to the beautiful world of Lisa Hilton and her music.

What I most enjoy is her unique “sound.” A sound which to this non-musician’s ear is enabled by striking tempo changes, a vivid imagination as a composer, unexpected reversals that make all the sense in the world, and thrilling runs along the groove that catch your ear immediately. I frequently find myself thinking, "How did she do that!? How'd she pull that off so damn smooth!?" The care and attention that imbues her compositions is obvious.

But what has most struck me over past albums is the dynamic tension between what I consider her signature styles. The one being the magically trilling, purposefully meandering lightness that leads one on a beautiful journey. The other is the hard-driving, emphatic, arresting, and deeply engaging one . . . the pieces that don’t allow your mind and emotions to float with the flow, but instead demand your undivided listening attention because . . . well, how could you not listen hard and intently and almost hypnotically to the world she paints? Lisa, her compositions, and her band mates grab you in a truly wonderful manner, and you enter their world quite willingly.

That’s the back story. Lisa Hilton’s new album Nocturnal is simply phenomenal. She has extended the breadth and depth of her composing and playing by taking full advantage of two great horn players, Terell Stafford on trumpet and J.D. Allen on tenor sax. The horns are no longer in the background in what formerly sounded to me as somewhat of a supporting role. On "Nocturnal," they are fully out front with her. Coupled with a stellar rhythm section - Antonio Sanchez on drums and Gregg August on bass - it is truly an amazing group producing truly amazing music. Music not just for this year, or for this decade, but for the ages.

Bottom line? This album is a tour de force. A quantum leap forward and outward and upward for Lisa, executed flawlessly. Always an impeccable and fully mature player and composer, she has reached a new level of conceptual development that flat blows me away. This is the best album I’ve heard in a decade, maybe in two decades. Note I did not say it’s the best Lisa Hilton album in ten years, it’s the best album I've heard, period. Deserving of record of the year on anyone’s list. -- Hugh "Hurricane" Carson, Jazz DJ, KVNF-FM, Western Colorado
Read more
8 people found this helpful
Helpful
Comment Report abuse
See all reviews