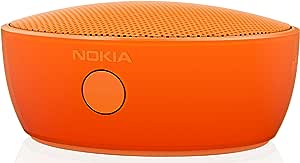 Visit the Nokia Store
4.0 out of 5 stars 45 ratings
Currently unavailable.
We don't know when or if this item will be back in stock.

Nokia brings you this powerful, sweet sounding mini portable Bluetooth speaker. Perfect for the summer. Compressed size without compromised sound Listening to your favourite music is now simpler than ever. With its ultra-compact design and coming in a range of beautiful colours, the MD-12 is small enough to slip into your pocket. Perfect for those times when you need to be on the move at a moment's notice. Big bass experience Don't let its small size deceive you. This little guy packs a load of power. Engineered with the latest technology, the MD-12 is designed with an actuator built in, creating a big bass effect when set on nearly any surface. Superior battery life for more listening fun With NFC included, just tap your NFC-enabled phone to the speaker and you're all set. Or use Bluetooth and stream your tunes wirelessly and dance the night away with a guaranteed 15 hours of music play on the rechargeable battery. Wire-free efficiency Be wire-free with Bluetooth and NFC. And combined with a long-lasting, rechargeable battery, keep the music pumping all night long on a single charge. Conference calls outside the office Take your office meetings with you wherever you are by joining your conference calls on-the-go, with the built-in microphone.

4.0 out of 5 stars
4 out of 5
45 global ratings
How are ratings calculated?
To calculate the overall star rating and percentage breakdown by star, we don’t use a simple average. Instead, our system considers things like how recent a review is and if the reviewer bought the item on Amazon. It also analyzes reviews to verify trustworthiness.
Top reviews

Aaron Nunez
4.0 out of 5 stars Great sound for how small this is
Reviewed in the United States on October 19, 2015
Verified Purchase
Good bass and sound. Fun trying this on different objects. I found this to work incredibly well on top of a peanut butter jar, on top of a wooden kitchen counter. I am not sure if you can connect multiple of these to a single device. Would be incredible experiment though.
Read more
Helpful
Comment Report abuse

LEM
5.0 out of 5 stars Love this speaker
Reviewed in the United States on October 10, 2015
Verified Purchase
This has a great sound and small enough to be perfect while you're on vacation
Read more
One person found this helpful
Helpful
Comment Report abuse

Turanga
5.0 out of 5 stars :D
Reviewed in the United States on April 24, 2015
Verified Purchase
I previously brought a yellow one but it got stolen from my house, I bought it again, and that's pretty much to say... Excellent product from NOKIA.
Read more
Helpful
Comment Report abuse

J. Stewart
3.0 out of 5 stars Falls short when compared to its direct competition...
Reviewed in the United States on September 8, 2014
In looking for another Bluetooth Speaker for my Nokia Phone, i thought after some positive video reviews, to get the Nokia MD-12. And while impressed with some aspects, ultimately came away somewhat disappointed.

The source of the disappointment comes when directly compared to the JBL Micro Wireless Ultra-Portable Speaker, which for less money, is overall a better experience.

Things i noticed when directly comparing the two brands i have....

- The JBL has Volume Control on the Unit itself, the Nokia does not, requiring the Phone itself for it's Volume. This is obviously somewhat annoying if your Handset is in a different room to the Speaker and you wish to adjust it.

- While the Nokia certainly has some Bass Kick for such a small unit, it's overall sound is somewhat tinny and hollow. By comparison the JBL has a rich, full sound, and doesn't suffer from distortion at high volumes that the Nokia sometimes exhibits.

- The JBL has a small integrated Handle for hanging the speaker on a Wall, by comparison the Nokia is magnetic, if you want an Audio Fridge Magnet. The unit itself is a bit heavier than the JBL, so let's hope that magnet is a strong one.

- The JBL will turn itself off after a sustained period of inactivity once playback has stopped (ideal for those who fall asleep to Audio). I have yet to test this on the Nokia, but there's no mention of such a function in it's brief Manual.

- On a Windows Phone the Nokia can be placed as a Live Tile, which shows how much Battery percentage it has left. Not a feature of the JBL.

- The Nokia can be used with Voice Calls, the JBL is purely a Speaker.

- As well as having a hollow sound in comparison to the JBL, it also doesn't go as loud. Even turning up the Phone to 30 (of 30) as the volume still sees it noticeably quieter than the JBL. And as mentioned, the Nokia suffers from distortion at those volumes, an issue i've never noticed on the JBL.

Overall, while beautifully designed and colourful (the orange is the full-on Day-Glo variety that the photo doesn't do justice) in comparing the direct competition, the Nokia sadly falls short.

As both units are around the same dimensions (about the size of a Hockey-Puck), and the JBL can be bought for less money, and deliver noticeably better sound, i'd have to say future choices in this market will see me leaning towards JBL Units.