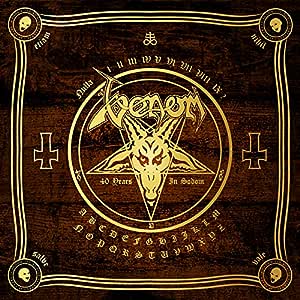 4.8 out of 5 stars
4.8 out of 5
186 global ratings
How are ratings calculated?
To calculate the overall star rating and percentage breakdown by star, we don’t use a simple average. Instead, our system considers things like how recent a review is and if the reviewer bought the item on Amazon. It also analyzes reviews to verify trustworthiness.

David Cantu
5.0 out of 5 stars From the VERY depths of hell..........
Reviewed in the United States on June 9, 2019
Verified Purchase
This boxed set is worth every single penny that one pays for it. You get a bunch of stuff on top of the speaker-blasting Venom music. Included are posters, a shaped 7", a reproduced 1985 tour program, a Venom's Legions back patch, and all four of their original studio albums (Welcome To Hell, Black Metal, At War With Satan, Possessed) plus Eine Kleine Nachtmusik (live concert) REMASTERED, PLUS a double album of rare demo material from 1979 & 1980 era. The 1979 material is very rough though.

All albums have been remastered and they did an excellent job at that. Each record is colored vinyl with swirls or splatter. I'm not sure if all pressings are the same or not, but it would be hard (I would think) to replicate each design/color scheme on each record pressed. My personal favorite is the "Eine Kleine Nachtmusik" vinyl set as the colors are black and gold, like the colors used on the album artwork.

'Welcome to Hell' comes with a poster inside of the record jacket.
'Black Metal' has an embossed jacket (much like the original version) lyrics, and a poster.
'At War With Satan' comes housed in a gatefold sleeve, has a 4-page lyric and info insert,.
'Possessed' comes with a HUGE poster, lyrics on the record sleeve.
'Eine Kleine Nachtmusik' comes in a gatefold (double album), no poster with this one.
'Sons of Satan: Rare and Unreleased" comes in a gatefold (double album).
7" shaped picture disk: 'Bloodlust" (single version), and 'In Nomine Satanas" (Single version). The shape resembles a planchette (an ouiji board pointer)

Last, but not least, is a 40-page "History of Venom" book. The box that this all comes housed in is huge and heavy. It is also decorated very nicely, a showpiece!

This is every metalhead's dream! This will surely go up in price, especially once the scalpers hit Ebay and Amazon with it after it goes out of print (which it surely will). I got lucky and bought it for $145.

Ahmed 'Nefarius' Shaikh
5.0 out of 5 stars Great compilation!
Reviewed in the United States on July 13, 2019
Verified Purchase
I rarely buy records on Amazon, but this was cheaper than Nuclear Blast was selling it for, AND I got the 2 day shipping. So went ahead and got it. Great pressing, look-wise, and also sound quality-wise. Decent selection of songs. Would be nicer if it was pressed on 180g, but have to be satisfied with 160g, I guess.

This was my second shipment, as Amazon failed to used special protective cover for the first shipment, resulting in a bent-jacket. However, they replaced it without a cost.
Read more

Amazon Customer
5.0 out of 5 stars Another must have Venom album !
Reviewed in the United States on July 2, 2019
Verified Purchase
Even though this compilation of Venom's songs are not new,in fact this album consists in their firsts albums,I had to have it because is f******* Venom ! The songs are re-mastered,( I can't tell and don't care); I believe that I have most of their albums,therefore I've got this songs all ready but if tomorrow Venom puts out this same songs but in different order I'm going to get it ! Stupid of me? probably...but is my way of saying thank you Venom for braking the rules,being different,expressing your selves and not sounding like ABBA or Art Kelly; Thank you for giving us the unique sound that we call Black Metal.If you never have heard Venom,buy this album,you will not be disappointed,and no...no demon is going to follow you home,demons are afraid of Venom.
Read more
5 people found this helpful
Helpful
Comment Report abuse

Tommyboy67
5.0 out of 5 stars Primer on Venom and early metal!
Reviewed in the United States on October 6, 2020
Verified Purchase
If you've ever seen the Millenials walking around with a Venom Black Metal shirt/backpatch on, this is the band from whence it came from. Venom was one of the originators of Satanic metal along with Black Sabbath and Coven among others whose influence can be heard in today's rock/metal from the likes of Ghost ,Mayhem and Twin Temple. This album shows us how its supposed to be done. The music is fantastic! Mind bending! Rocking Hard! You'll hear the musical evolution as they go from wet-behind-the-ears to the elder statesmen. WELL worth its weight in gold. Standout tracks are Welcome To Hell, 1000 Days in Sodom, Black Metal, Buried Alive, Teacher's Pet, Warhead, 7 Gates of Hell, Witching Hour and Leave Me in Hell.

Jedrek P. Grimes
5.0 out of 5 stars He’ll yeah
Reviewed in the United States on June 9, 2020
Verified Purchase
I would have to say the albums came in the most protected container that I have ever received before they were in a box inside a box inside another box item is beyond what I expected very very happy so go and buy you one
Read more
4 people found this helpful
Helpful
Comment Report abuse

Mark
5.0 out of 5 stars Pass.
Reviewed in the United States on September 4, 2019
Verified Purchase
Not the best disc from these Satanic Britain Poofs!
Great band, but this is blah.
Read more
Helpful
Comment Report abuse

robert baker
4.0 out of 5 stars v.e.n.o.m
Reviewed in the United Kingdom on June 11, 2019
Verified Purchase
I mainly purchased this double CD because I wanted to hear 2019 remasters. I first heard Venom on ECT ch.4 in 85 and at 12 I was hooked, especially when I brought the 'Black Metal' album. So I curiously brought this!!!
This is fantastic value for money, two CDs and a booklet, about the history of the band up till 1986. Venom are about taking the art of heavy metal a notch further, when it works it's really effective & when it doesn't, its doesn't. But this band can be intense and heavy, with strong riffs and what the band lacked in finese and musical tightness, they made up with passion and energy!!
The '19 remasters of tracks from Welcome to Hell & Black Metal really stand up , the dynamics of tracks such as Buried Alive, In nominees satanas & 7 gates of hell. the songwriting is really strong on songs like Chanting of the priests, Countess Bathory & One thousand days in sodom.
However, the tracks from Posssessed seem like they've lost some of the dark heaviness on this new remaster & tracks such Foad, s¥£€s $€£÷, are unfocused. the band were better than that.
I want to point out, it includes the best version of Manitou, ever!!!!! As well as Manitou, the band use tribal type drums on In league with satan. This creative form of composition shows the band are can widen their songwriting. Also the band can deliver live as shown on the recordings Witching Hour & Schizo. Also the band can stand up to any extreme band with powerful, energetic & intense tracks such as Bloodlust & Die hard, any Punk/metal/hardcore/oi/industrial combo!!!
I would reccomend this compilation because it's a great collection but if you haven't heard Venom before , I would reccomend the Black Metal deluxe edition CD because that's the bands strongest album, with the live DVD!!!
Read more
One person found this helpful
Report abuse

Amazon Customer
5.0 out of 5 stars WELL WORTH YOUR MONEY
Reviewed in the United Kingdom on September 8, 2019
Verified Purchase
Got this boxset for £150 when it was released now its £110 so you gotta get it. Its a fantastic boxset trust me. I would put it on par with the NAZARETH boxset which is also a great buy.
Read more
2 people found this helpful
Report abuse

stevenom
5.0 out of 5 stars V. E. N. O. F#*"ING. M...
Reviewed in the United Kingdom on June 2, 2019
Verified Purchase
Pure class frome beginning to end,
Excellent compilation from the first incarnation of venom,
The remixes are good, although some of the tracks you can't really tell the difference.
If you're a fan,, then it's a must have.
Sell your soul to the god rock n roll.
Read more
One person found this helpful
Report abuse

DeanT
5.0 out of 5 stars Diabolical! (in a good way)
Reviewed in the United Kingdom on October 14, 2020
Verified Purchase
Brilliant box set. Only recently discovered Venom, and this is in at the deep end! Way more in the box than I expected/had read in the spec. Discs look and sound great, really good quality presentation, the tour programmes, posters, booklet, tour patch. Unreal. Have paid a lot more for a lot less in other box sets, this is absolutely worth it. Gonna be a great weekend 🤘🤘🤘
Read more

Fraser Machin
5.0 out of 5 stars Great Venom Collection
Reviewed in the United Kingdom on October 4, 2020
Verified Purchase
Being a huge venom fan I got hols of this as it had a lot of great songs in one place. Would recommend to any venom fans and metallers who don't know too much venom as this has so many great songs on it it will gI've a great introduction to the band
Read more
Report abuse
See all reviews

Page 1 of 1 Start overPage 1 of 1
This shopping feature will continue to load items when the Enter key is pressed. In order to navigate out of this carousel please use your heading shortcut key to navigate to the next or previous heading.
Back
Next
Pages with related products. See and discover other items: Explore poster board for vinyl