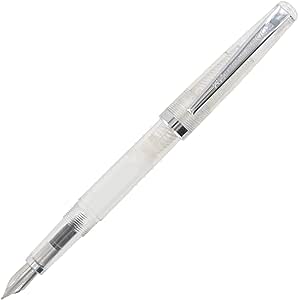 Noodlers Clear Demo Fountain Pen with FLEX Nib New from Noodlers - Piston Fill Fountain Pens with Flex Nib! -- Noodlers Writing Instruments of the World. This listing is for one Noodlers Flex Nib Fountain Pen. This is a brand new fountain pen with a retro (60s) style and Noodlers branding bringing writing fashion and function to a new height. The nib feeds more ink as it is flexed - the auto-vent flex opens the air passage to the feed far more than a conventional nib is capable of. A light touch at 45 degrees can produce a hairline to 1.5 mm (0.0906 inches). The speed of writing with a fully flexible nib should be adjusted to suit the flow of each ink type used (some inks will flow faster than others). Slower writing may be necessary if one is writing Victorian style script vs. fine shorthand - which can be written more rapidly. Available currently in limited quantities. With piston fill, 5¼ inches long with the cap closed, manufactured from a U.S. developed celluloid derivative, with a modern [type of] nylon sealed piston. The ink compartment is windowed, and the screw-off cap and section are banded. The metal clip and the nib proudly sport NOODLERS INK. Pen comes in its own individual Noodlers box with a detailed instruction sheet.

4.0 out of 5 stars
4 out of 5
265 global ratings
How are ratings calculated?
To calculate the overall star rating and percentage breakdown by star, we don’t use a simple average. Instead, our system considers things like how recent a review is and if the reviewer bought the item on Amazon. It also analyzes reviews to verify trustworthiness.

WTop Contributor: Fountain Pens
4.0 out of 5 stars Novelty
Reviewed in the United States on August 22, 2016
Color: ClearVerified Purchase
I've read a lot of the complaints (unreliable, smells bad), AND the glowing reviews (a flex pen for cheap, a tinkerer's pen), and here's my take after one month of consistent use. Yes, it works well when it works, and I did enjoy the "tinkerer's" aspect of heat-seating the feed, and fine tuning the nib. And I loved having a relatively flexy pen for my fun inks.

However, for me, that novelty ran out. I've had ink sputter onto me (and my clothes) while writing, random blobs of ink bleed through my papers, ink leaks, rapid drying-out, and I'm pretty sure the section isn't machined correctly to even fit the metal nib because it has to be pushed so far in to stick, it's barely usable. Cosmetically, the section-to-barrel area is definitely crooked. So while this was truly fun for a few weeks, and I even came to endear the acrid smell, the thought of getting it out for another use turns me off.

For the low cost, yeah, why not enjoy a few weeks of "tinkering" and fun flex writing. For me, that lasted a month, and then the word "tinkering" started to seem like a fancy way of saying "this pen was poorly made, please fix it yourself."

I may try again with a Konrad or Ahab down the line, but for now, the Creaper is fondly remembered but has been laid to rest.

snail
4.0 out of 5 stars comfortable to hold, but requires some modification to get a consistent line
Reviewed in the United States on June 8, 2015
Color: ClearVerified Purchase
Mine just arrived today. This pen certainly takes some getting used to, because the nib must be adjusted in order for it to write well. Eventually I might modify it to alter the ink flow so it isn't so dry when I flex a lot. However, I like the line quality and the variation in width that it is capable of achieving. The difference between the thick and thin lines is much more dramatic than I had anticipated. If I could keep it from railroading and if it were easier to start when it scratches a dry line, I would like it more, but I have so far been twisting the end to pressurize the ink so it flows better, and this has been a good temporary work-around. I'm sure this is going to end up being one of my favorite pens once I get the hang of it. I might just need higher quality ink for it. I already tried soaking it in soapy water for a bit and moving the pieces around to customize it to get the desired amount of flex. When it writes without skipping, it writes beautifully and is everything I was hoping for. It also has a small enough body that it fits well in my hand and allows for a wide range of movement from my fingers, which is how I tend to write. I like the shape and the fill system better than the Ahab, which I also bought, and it seems to do a better job because the small size makes it easier to angle in ways that make it more likely to work properly. I would also like to add that this pen seems to be especially great for drawing, so even if I never learn to make my writing beautiful with it, I probably won't regret buying it. I am including a small writing sample to show the line width variation of pressing even very lightly. You can also see where it got dry and skipped, but I think that isn't going to be an ongoing thing once I customize it a bit better.
Read more

Colin M.Top Contributor: Calligraphy
5.0 out of 5 stars Not a first pen, but definitely a second or third.
Reviewed in the United States on May 4, 2017
Color: ClearVerified Purchase
I do think the Konrad and the Ahab are better pens, but if you like thin and small and still want a piston filling demonstrator pen with a flexible nib, this is where the money's at.

I have two, one that I ground the feed out to gush ink, and this one, which I kept stock.

Noodlers pens DO REQUIRE SOME FIDDLING. DO NOT BUY THIS AS A FIRST PEN. You will have to likely adjust how deep the nib and feed are in the body (further out = more flex, closer the feed is to the tip of the nib, more inkflow) and maybe use a razor blade to cut the ebonite feed a bit, but this will take any standard #5 nib as well, and is a proper piston filler.

The biodegradable vegetal resin isn't as crystal clear as a TWSBI's plastic, but it's still quite clear, and it's tougher than any other plastic you can think of. Nathan Tardiff of Noodlers has a video of himself driving over a konrad (Same material) with his car twice and it wrote fine, and then firing one out of a shotgun (it survived) It does have a VERY strong odor out of the box, some people HATE the smell, so if you don't like the pen's odor, stick it in a drawer for a week and it will dissipate quickly.

It's a very thin, light pen with a good posting cap.

The nib is nice, will flex very broad (western EF to about a 1.1-1.5 stub) though it does require way more pressure than a "vintage" flex pen, if you want to write bold and broad, this will do the job, no problem. It will get tiring to do after 10-15 minutes, unlike a vintage flex pen, but that isn't this pen's intent. It does write like a slightly springy gold nib when writing normally, which I really like (not like a soft nib, but softer than regular steel nibs)

Piston mechanism is smooth, simple, and reliable, and it holds a good amount of ink (2.5ish ml)

The only issue I have with these nib creapers is that the cap has no inner seal, so it can't be sat in a drawer, inked, like a platinum with a slip and seal cap or even a jinhao. The konrad has an inner cap and the ahab seems to not have much issue (my neponset is ebonite without an inner cap but seems to not have trouble either) it will dry out if left for a week inked and unused. So only ink this pen up when you want to use it, and the rest of the time, keep it empty, and you won't have any issues.

Overall, if you have a few dollars more and don't desperately want the thinnest pen you can find, I suggest the ahab, or if you need something a little smaller, the konrad, which are a bit more versatile and have a more easily swapped #6 nib. But for what it is, this is a solid little flex pen.
Read more
32 people found this helpful
Helpful
Report abuse

Gift of Heart
4.0 out of 5 stars FYI This is a Noodler's Creaper
Reviewed in the United States on December 10, 2017
Color: ClearVerified Purchase
The title of this pen didn't name the pen but FYI this is a Noodler's Creaper. It has a small nib and does flex a little with some line variation. It's easy to fill and writes smoothly. I'm just a little annoyed that the title of the pen on Amazon didn't say Creaper. I bought a Creaper with it thinking they're two different pens but I'm a fool...they're the same. With the price we pay though, I'll keep them both, they're nice pens.
Read more

Taylor S
4.0 out of 5 stars You will swear at this pen
Reviewed in the United States on October 15, 2016
Color: ClearVerified Purchase
This pen is marketed as a pen for tinkering, and you should expect that going into it. I've spent many cumulative hours pulling the nib and feed in and out, trying out different inks, and scrubbing ink off my hands. Not always with great results. I'm convinced that some inks will just not work with this pen. However, getting this pen to write is super satisfying. When everything is tuned right, it's a smooth and pleasant flex writing experience. If you decide to buy this, get some latex gloves as well.
Read more
30 people found this helpful
Helpful
Report abuse
See all reviews

Dev
5.0 out of 5 stars Five Stars
Reviewed in India on May 17, 2018
Color: ClearVerified Purchase
This pen is suitable for pitman's Shorthand writing.
Read more
3 people found this helpful
Report abuse