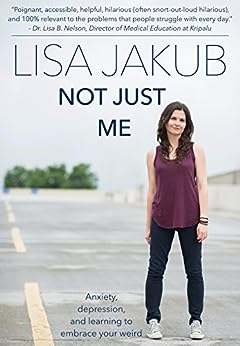 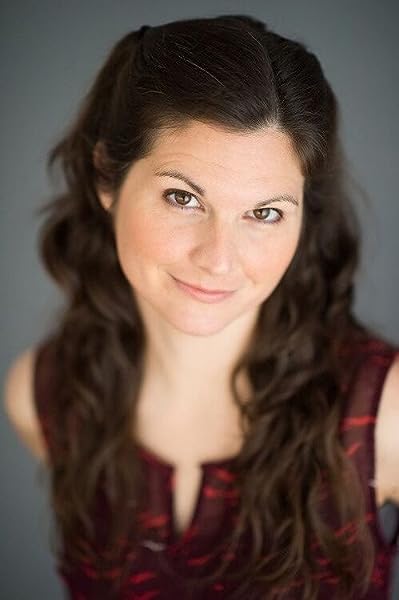 Not Just Me: Anxiety, depression, and learning to embrace your weird Kindle Edition

"Poignant, accessible, helpful, hilarious (often snort-out-loud hilarious), and 100% relevant to the problems that people struggle with every day."
- Dr. Lisa B. Nelson, Director of Medical Education at Kripalu

"This is the best practical guide to living with anxiety that I have read. If you suffer from anxiety or love someone who does, read it. This book will change lives. "
- Daniel Willingham, Professor of Psychology at the University of Virginia

"Lisa Jakub has an exceptionally accessible, honest voice and a wry sense of humor-a great antidote to difficult terrain."
- Claudia Kalb, New York Times bestselling author of Andy Warhol Was a Hoarder: Inside the Minds of History's Great Personalities.

Lisa Jakub is a writer, speaker, and retired actor. She grew up in Hollywood, as a child actor who appeared in more than forty movies and television shows during her eighteen-year career. She worked on such blockbusters as Mrs. Doubtfire and Independence Day, as well as critically-acclaimed films such as Rambling Rose, A Walk on the Moon and Matinee. Not wanting to become a child actor stereotype, Lisa retired from the film industry at the age of 22, in search of a path that felt more authentic to her. She moved to Virginia and found that passionate life she was looking for when she became a writer.
Her first book was a memoir, You Look Like That Girl, which was published in 2015. Not Just Me is her second book. Lisa has appeared on HuffPost Live, MSNBC, CTV, BBC and CNN. Her writing has been featured in Newsweek, Today.com, Huffington Post, NY Daily News, DailyMail, LA Times, Yahoo, AOL, Parade, Elephant Journal, Thought Catalog, Yoga Magazine and US Magazine.
Lisa does speaking events at high schools, colleges, and conferences where she runs workshops about writing, anxiety, mindfulness, and living an authentic life. She is also a Kripalu yoga teacher and loves teaching yoga to people who think they can't do yoga. Lisa lives in Virginia with her husband, Jeremy.

4.9 out of 5 stars
4.9 out of 5
58 global ratings
How are ratings calculated?
To calculate the overall star rating and percentage breakdown by star, we don’t use a simple average. Instead, our system considers things like how recent a review is and if the reviewer bought the item on Amazon. It also analyzes reviews to verify trustworthiness.
Top reviews

S. S. Smith
5.0 out of 5 stars A very well researched and relatable book
Reviewed in the United States on November 30, 2017
Verified Purchase
Could this book have possibly been published at a more opportune time? No. Is this a book for the lay person who is struggling with depression and/or anxiety or for anyone who knows someone who is struggling? Yup. Lisa Jakub is that dear friend whom you wish you had at your side when the going gets tough. With humor, intelligence, insight, perspective and an "I totally understand" attitude, she brings you on a journey of discovery and acceptance. Ms. Jakub has extensively researched her subject to understand more clearly the range of issues facing those who struggle. For example, there is a section of the book on Veterans. Ms Jakub notes: "Cognitive behavioral therapy does not work as reliably for them as it does with the civilian population. Only about one in three combat Vets see any improvement in PTSD symptoms from CBT, and many end up dropping out of therapy programs because of adverse reactions." Not all depression and anxiety is alike! "What appears to work is community," Ms. Jakub explains. And what follows is a gorgeously written and engaging discussion of what it means to heal in community. Ms. Jakub also lays some very important general foundations in understanding mental health. Anxiety is not in itself the problem. There's a bit about anxious crayfish that is sweet and deeply reassuring (and pretty funny - I liked the idea of crayfish backpacking through Europe - you'll get the joke when you read the book). As Ms. Jakub explains not only is anxiety normal, it's also a healthy response. The stories and individual experience are multi-faceted and expansive. There is something for everyone in this book. Because we are all in this together. It's not just the Vets who can use community to heal.
Read more
7 people found this helpful
Helpful
Report abuse

John A.
5.0 out of 5 stars Definitely Not Just Her!
Reviewed in the United States on September 17, 2017
Verified Purchase
Lisa Jakub really did her homework in this well written book about living and dealing with anxiety, depression and panic attacks. As someone who has been dealing with anxiety and depression for most of my life I found this book very well written and informative. It has opened my eyes to many new therapies and treatments available to those like myself who have been suffering with this for so long. Lisa put her soul on the line and left nothing out describing the hell she’s gone through with depression, anxiety and panic attacks.
She discusses the ups and downs of using drugs (including Marijuana!), the effects of different foods, seeing a doctor, meditation, Yoga, any many other types of therapies. She also wrote about the work she’s done with veterans and their problems with PTSD. If you’re dealing with these problems or know someone who is I highly recommend you read this book. She’s even included a “fill in the blank” form you can give to your doctor! Be good to yourself and get this book…and I’m going to read it again!
Read more
5 people found this helpful
Helpful
Report abuse

Amazon Customer
5.0 out of 5 stars Funny, heart warming, yet informative and annecdotal
Reviewed in the United States on December 16, 2018
Verified Purchase
This book is fantastically funny and comforting. Lisa uses her own anxiety, depression, and experiences to destigmatize these prevalent issues that so many of us have. She does an excellent job of intertwining her experience and research. In every chapter, She also offer some advice or strategies for coping and dealing with anxiety and depression. I couldn’t believe how cheap this book was on Amazon. Now, after reading it, I wish they would have charged more. She deserves it! Easy yet a deep read for me. I loved this book!
Read more
One person found this helpful
Helpful
Report abuse

Sunny D
5.0 out of 5 stars Weird is good...
Reviewed in the United States on August 11, 2017
Verified Purchase
Lisa has such an accessible and friendly tone. On a topic requiring tremendous gentleness, her voice jumps off the page as a compassionate friend having a cup of chamomile tea while challenging you to consider ways to make your own life easier. This book was autodelivered to my kindle at midnight on the 8th, and despite working full time and raising 2 active kids, I've finished it. If you're feeling anxiety, pick it up and see some of Lisa's practical suggestions to make your life compatible with your "weirdness".
Read more
4 people found this helpful
Helpful
Report abuse

Tom Bux
VINE VOICE
5.0 out of 5 stars Really a great book-Helps with anxiety.
Reviewed in the United States on February 19, 2019
Verified Purchase
I really love this book. I deal with crushing anxiety and depression. I have for a long time. This book really comes across as if she knows what it's like, because she has.

Her writing is very conversational, and her stories relate, more than you can know. She knows how it feels to be anxious and depressed and does an outstanding job of explaning it. It feels like she is talking directly to you.

Give this book a read. I am sure you will be glad you did.
Read more
One person found this helpful
Helpful
Report abuse

Cav Man
5.0 out of 5 stars Great Book on Tough Topics - "Not Just Me" is a Must Read!
Reviewed in the United States on September 8, 2017
Verified Purchase
Jakub's "Not Just Me" is a book that everyone should read! The topics of anxiety and depression are talked about more than they used to be (thank goodness), but not usually presented in such an understandable and relatable manner. I loved reading the personal stories and admire Jakub for sharing her own experiences and struggles with anxiety and depression. I found the "something to try" sections at the end of chapters to be easy to follow, something I would actually try and also empowering, - it feels great to take steps, no matter how big or small, towards a healthier life!

This book is a great read - full of information and also entertaining. I have read it twice and laughed and cried both times!
Read more
2 people found this helpful
Helpful
Report abuse

Joseph
5.0 out of 5 stars Really what I needed.
Reviewed in the United States on February 19, 2019
Verified Purchase
This is a great book for anyone dealing with anxiety and depression. I get so stuck in my own head sometimes I think that I'm the only person in the world with these problems but there are so many of us. The guide meditation chapter was extremely helpful to me.
Read more
One person found this helpful
Helpful
Report abuse

DF
5.0 out of 5 stars Needed !
Reviewed in the United States on March 4, 2018
Verified Purchase
You will laugh and learn a lot from this book. A perfect balance of interesting and informative. If you or someone you know is struggling with anxiety / depression, this book offers multiple paths along which you can walk to look for your solution. More importantly this book offers understanding & hope to those who may need a strong dose of both.
Read more
One person found this helpful
Helpful
Report abuse
See all reviews

Julie Baird
5.0 out of 5 stars It reads like a conversation with your best friend.....
Reviewed in the United Kingdom on March 26, 2018
Verified Purchase
I've read a lot of books now and this explains things in a very easy to follow manner, just like you're chatting with a friend and suddenly realise you are both on the same page.....

It's not clinical and gives you real life tools you can easily use, a must read for anyone who suffers from any kind of anxiety or depression.
Read more
2 people found this helpful
Report abuse

Peachy
5.0 out of 5 stars Fab
Reviewed in the United Kingdom on November 15, 2018
Verified Purchase
Wow and incredible read I must say I’ve had some books similar to this over years and if I’m onest I never finished them but this one is so onest and frank it was just whah I needed great purchase and would recommend
Read more
Report abuse

Laurie F.
5.0 out of 5 stars An excellent read!!!
Reviewed in Canada on September 21, 2017
Verified Purchase
Beautifully written, insightful, and humorous! Everyone will find something to relate to in this book! I certainly did!
Read more
Report abuse

Shirley Umae
5.0 out of 5 stars So Good
Reviewed in Canada on February 10, 2019
Verified Purchase
Just a fantastic read. She is a wonderful writer. Could really relate to the situations. Very helpful
Read more
Report abuse
See all reviews