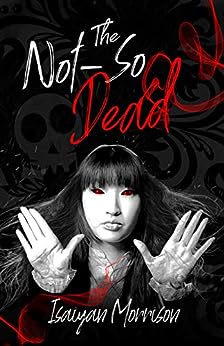 4.5 out of 5 stars
4.5 out of 5
32 global ratings
How are ratings calculated?
To calculate the overall star rating and percentage breakdown by star, we don’t use a simple average. Instead, our system considers things like how recent a review is and if the reviewer bought the item on Amazon. It also analyzes reviews to verify trustworthiness.

Katherine Lopez
5.0 out of 5 stars This fast-paced supernatural story has a dash of romance and mystery
Reviewed in the United States on March 30, 2020
Verified Purchase
I loved diving into this other world with various mystical creatures. Opening on a “family” of wraiths, we become introduced to these mysterious creatures that leech off the energy of other human beings. The clan is a nomadic one, and they try and fly below the radar of wherever they live. Attempting to escape a messy situation created by one of their own in their previous hometown, they settle in a small town in Texas. However, their attempt to maintain anonymity does not go well, because almost as soon as they arrive, they find themselves targeted by a masked man, clearly trying to annihilate their group. Unfortunately, they can’t just pick up and leave, but they start making plans to find a new home.

Meanwhile, Faye, the newest member of the wraith clan, meets a boy who will not be fooled into thinking they’re just the new people in town. A naturally curious young man due to experiencing the murder of his parents at a young age, Carter eats, sleeps, and breathes supernatural lore. Because of this, he quickly figures out Faye is not human, but also becomes her friend and ally. Together, they try and convince her family that he can be trusted, even if he is human, and they even manage to escape the mysterious masked hit-man. But they are left with several questions to answer, like why he is after them, and how he even found them in Texas in the first place.

This captivating world that Morrison has crafted will draw you right in and you may even devour this book in a day, like I did. I could not put it down! She has outlined a great story and revealed just enough to keep me on the edge of my seat. I am disappointed and very impatient that I will have to wait for the next installment to find out what will happen to Carter, Faye, and the rest of the clan!
Read more
One person found this helpful
Helpful
Report abuse

Maria V
4.0 out of 5 stars A journey through the paranormal life of a teenager
Reviewed in the United States on March 11, 2020
Verified Purchase
The Not So-Dead by Isaiyan Morrison is a skillfully crafted paranormal story. Faye is a teenager whose life was changed when she unwittingly becomes not so-dead. All she desires is to return to her old life with her family and friends. Instead she travels from place to place with her new family who are like her. The only thing that keeps her ‘alive’ are her video games that she would play 24 hour day if she could. When they settle down in Hueman, Texas, she comes face to face with the reality what it means to be not so-dead.

When a member of her new family is killed by a mysterious man in a black mask Faye’s curiosity is peaked about the secrets of the not so-dead. As she befriends a human named Carter who witnesses the murder, he becomes more involved in her life and some of her family members are not happy about their new found friendship. They insist she not be involved with humans. Nonetheless, Carter wants to keep Faye safe from the murderous masked man and begins to wonder if there is any connection between her family and his parents murder ten years earlier. As Carter becomes drawn closer into Faye’s family drama he learns much more than he bargained for.

While I am not a fan of the paranormal genre, the author keeps the story flowing with action and an oddly realistic spin on things. This is only the first of the The Dead Series for new fans of the author to enjoy.
Read more
One person found this helpful
Helpful
Report abuse

my nguyen
5.0 out of 5 stars Page-turning paranormal read
Reviewed in the United States on January 24, 2020
Verified Purchase
Faye is among a family of wraiths, stragglers who were recruited into the group, who were now moving to Texas. The area couldn’t have been less appropriate for the not-so dead group. 100% sunshine day in day out with little shade made the wraiths not so pleasant company, yet as they struggled to acclimate themselves to the weather, Faye couldn’t be helped but be drawn to their new locale. Or maybe it was someone. As she gets to know Carter, she finds herself more and more enwrapped in the lives of humans.

Faye was a relatively young wraith. The other members of her nomadic family no longer had human tendencies. As a wraith, she still missed being human. Things like not eating hot food, hanging out with friends and playing video games all day and watching anime non-stop irked her.

Being relatively new to this wraith business, sometimes Faye takes a little too much when feeding. Wraiths are shadowy creatures who feed on energy. All they need is touch and then energy through the form of red squiggly lines transfers to them. It will be a matter of time before she loses control and takes more than she needs. It has happened before.

During one of their feeding fests, one of their own was brutally hunted and taken down. It looks like there was a wraith hunter in their midst.

But the group was tired of running around. Hueman would now be their home.

‘The Not-So Dead’ was an intriguing read. I found this to be a page-turner – I was riveted on finding out what happened to these interesting group of characters. Highly recommended for fans of thrillers/suspense/paranormal.
Read more
Helpful
Report abuse
See all reviews
Back to top
Get to Know Us
Make Money with Us
Amazon Payment Products
Let Us Help You
EnglishChoose a language for shopping. United StatesChoose a country/region for shopping.
© 1996-2021, Amazon.com, Inc. or its affiliates